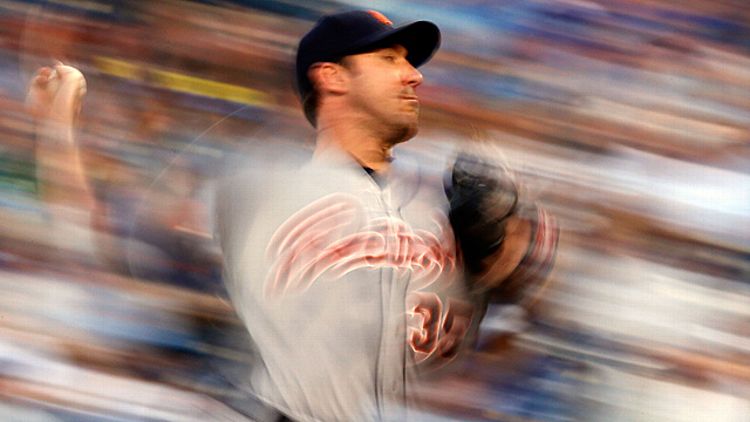 Fair warning: This is going to be an overwhelming weekend. The start of college football and U.S. Open tennis join baseball in a sort of sports cornucopia. And next weekend will be even more intense, when NFL football joins the fray. Throw in the end of summer’s miserable heat, and this is easily the best time of year.

The Cincinnati Reds are tied for the best record in baseball (OK, fine, they’re percentage points behind the Nationals), and may be the most anonymous great team in recent memory. The fact is, I’m not sure the world was ready for this kind of greatness coming out of Cincinnati. There may have been a time when the Reds’ success seemed like a fluke, but those days are long gone, and with 30 games left in the season, they are as good as playoff-bound. But what do we actually know about them? This might say more about me than the Reds, but when I gave myself a quiz about the Reds roster, well … I’m not even going to tell you the results. Suffice it to say, I’m embarrassed. Especially when you study up and realize exactly how great they are. Just ask Jonah Keri, who, believe me, can name way more Reds than I can. They even seem collapse-proof at this point, with lots of remaining games against teams like the Cubs, Astros, and Phillies. Time to pay attention, America.

9. This Week’s Reason to Watch the Royals (KCR-MIN)

Remember last year when Evan Longoria’s heroics led the Rays to a crazy comeback win over the Yankees on the last day of the season, and then Boston imploded against the Orioles to miss the playoffs? If not, please take in this epic nine-minute video, which never gets old. Seriously, I just watched the entire thing and felt the schadenfreude goose bumps all over again. Anyway, the Yanks helped the Rays by blowing a 7-1 ninth-inning lead in that one, and you got the sense they weren’t too upset about it. Now, with Oakland winning every game in sight, it looks like the second AL wild card will be a head-to-head duel between Tampa and Baltimore. And what do you know — the Yanks are playing Baltimore this weekend, and Tampa needs their help again. Meanwhile, they should handle the Bautista-less Jays with ease, especially with Jeremy Hellickson and David Price slated to pitch.

What’s this? A duel for Hot Bat of the Week? Unprecedented? Alvarez has a sweet .478/.500/1.000 line with three home runs in his last six games, while Braun is the best player in baseball over the past two weeks. I have to admit that the mischief-loving side of me wants to see Braun just torch the entire league over the next month to see how they justify not giving him the MVP. Because, believe me, they won’t.

The Dodgers are 2-4 since the mega-trade that landed them Adrian Gonzalez, Josh Beckett, and Carl Crawford, and last night they got shut out 2-0 by Ian Kennedy and the D-backs. As of this morning, they had fallen 4½ games behind San Francisco in the NL West and trailed St. Louis and Pittsburgh by 1½ and 1 games, respectively, for the wild card. And while it may be true that the new ownership group is taking a money-is-no-obstacle approach, as Jonah pointed out earlier this week, it still feels like they made some pretty big sacrifices for this season’s playoff run. If they fail, the whole thing has to be compounded by what they lost, right? They have to win games against teams like the Diamondbacks. Sixteen of their last 30 games are against quality opponents, and even if they perform well in those, they still need to make the “easy” ones count.

Oh, wow. Remember how last weekend none of the AL Cy Young candidates pitched? Our patience has been rewarded! This is the Sunday-night game, and with both teams fighting for a division title, I’m willing to go out on a limb and call it the best pitching duel of the year. More on this series in a moment (SPOILER ALERT). (OH WAIT, SPOILER ALERTS ARE SUPPOSED TO GO BEFORE THE SPOILER, AREN’T THEY?)

Earlier this week, Grantland published two separate pieces about how the Orioles were here to stay atop the standings, then a third (mine) saying that alone among the three unexpected playoff hopefuls (Pirates, A’s), they were doomed. But as people like me keep expecting the collapse, the Orioles keep winning games. Still, even a mini-downturn in luck (or bullpen performance) would be detrimental to a team clinging to a slim wild-card lead over the Rays, Tigers, and Angels.

Now, the Yankees — it’s a damn slow bleed in the Bronx. I didn’t want to admit it, but with a 28-25 record in July and August, it’s no longer deniable. The main problem, of course, is injuries. When you look at the season from a wide angle, it’s an absolute carnage scene. Pineda, Chamberlain, Rivera, Gardner, A-Rod, Pettitte, Nova, Sabathia, and now Teixeira … it’s a nightmare. And thus a 10-game lead on July 18 has been whittled to 3½ only six weeks later. You can feel the tension just by watching Joe Girardi, whose bench manner and postgame pressers become increasingly neurotic. And if their July-August pace continues, the Yankees will miss the playoffs.

Interesting series, right? Here you have one team scraping and clawing to maintain a diminishing lead, and another defying expectations and trying to believe that they’re not running on thin air like Wile E. Coyote after he left the cliff.

All five AL Cy Young candidates were set to pitch over a two-day span earlier this week, and I wrote a piece about the great drama, and how, despite the fact that Felix Hernandez had a slight edge, all five were close enough to the lead if they turned in great performances. So what happened? Felix was brilliant, throwing a complete-game shutout against the Twins. Everyone else? Not so much:

I had no idea you could jinx something like the AL Cy Young race, but it looks like I managed. Anyway, every King Felix start is now mandatory viewing. With four complete-game shutouts to his name in August alone, he’s progressed beyond “hot” and “scorching” to “volcano” level. That’s never been done before, which I know because I just made it up.

Pound for pound, the pitching matchups here are the best of any three-game series I’ve seen so far this season. Here’s each one, with the pitcher’s NL rank in Wins Above Replacement in parentheses.

Great stuff. And before we move on, let’s give a quick shout-out to MLB’s horrible, awful, tragic blackout policy, which will keep a North Carolinian like me from seeing either this series or the Yanks-Orioles. Nothing but the man keeping us down.

So nice, it makes the list twice. With the Yanks, Rays, Orioles, A’s, and Angels battling things out in the East and West, there’s a very good chance that the second-place prize in the Central will be a trip to the golf course. The highlight, of course, is the Sale-Verlander Sunday-night duel mentioned above. But make sure to check out Tigers starter Max Scherzer on Saturday. He’s an interesting curiosity, leading all starters in strikeout rate while somehow amassing a pretty mediocre ERA. Part of the problem is his high home run rate, and taken in conjunction, these stats paint a profile of a guy in constant attack mode. Indeed, a deeper look shows he has the fifth-highest average fastball velocity in baseball, and throws it 62 percent of the time. Mr. Scherzer just doesn’t like to screw around. But neither do the White Sox, a great home-run-hitting team that will gladly sit dead red. Watch for guys like Konerko and Rios and Dunn and Youkilis and Ramirez to put a dent in Scherzer and help their team do the same to Detroit’s playoff hopes.