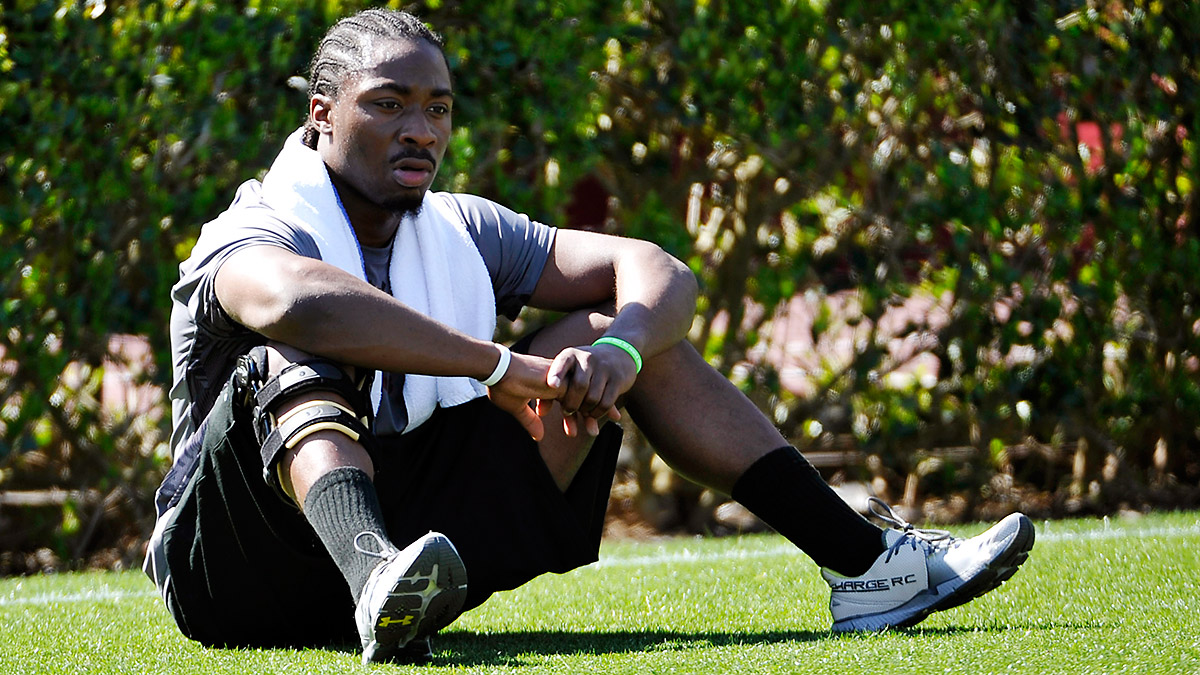 The untimely end of Marcus Lattimore’s football career has been a distinct possibility since the moment he injured his knee on October 27, 2012, while playing college football for South Carolina, and it has finally come to pass. Lattimore, who was drafted in the fourth round by the 49ers in 2013 but never played a down for San Francisco, announced Wednesday that he would retire from professional football. He turned 23 last week.

The injury that occurred against the Tennessee Volunteers was Lattimore’s second season-ending knee injury in a 54-week span, and it was by all accounts an all-timer in terms of gruesome and devastating sports injuries.1 But that shouldn’t be all that we remember.

Lattimore will now look to complete his degree at South Carolina, where I attended college and where he remains a tremendously important figure in recent Gamecocks football history. A five-star high school recruit in the class of 2010 and South Carolina’s Mr. Football, Lattimore was a landmark signing for Steve Spurrier, the kind of talent who under Lou Holtz or Brad Scott would have either gone out of state or, worse, to Clemson. In the span of three years, Spurrier introduced Lattimore, Alshon Jeffery, Stephon Gilmore, and Jadeveon Clowney: all four- or five-star in-state recruits who started as true freshmen and went on to become college superstars, turning South Carolina from the place players went if they weren’t good enough for Florida or Georgia into a consistent top-10 team.

Even among such highly regarded company, though, Lattimore stood out. He was an Eddie George–type runner, a tallish back who’d move the chains against whatever defensive front he faced, whether it was Furman or LSU or Patton’s Third Army. He got America’s most famous run-and-shoot coach to run a grind-it-out power game, because while Spurrier tends to be pass-happy, he’s not stupid. Lattimore wouldn’t reverse his field and make five guys miss, like Reggie Bush, but he’d take the ball and eat up the opposition, 4.8 yards at a time.

From 2010 to 2012, South Carolina would line up in a two-tight-end shotgun set, and you knew that either Lattimore would get the handoff, or quarterbacks Stephen Garcia or Connor Shaw would fake a handoff to Lattimore as part of a read-option run or play-action pass. Spurrier knew that when an 18-year-old tailback could beat up Georgia for 182 rushing yards and two touchdowns on 37 carries, as Lattimore did in his second college game, you give the kid the ball as much as possible.

That kind of line became routine for Lattimore, who managed 29 carries, 184 yards, and a touchdown against Tennessee, and 40 carries, 212 yards, and three touchdowns against Florida as a true freshman. In the first three games of his sophomore season, Lattimore ground out 87 carries, 534 yards, and seven scores. His final 100-yard rushing performance came in a 35-7 humiliation of Georgia in 2012.2 A week later, he scored from 2 yards out to put South Carolina, then no. 3 in the country, up 14-10 on LSU under the lights in Baton Rouge. Though the Gamecocks lost the game, 23-21, that moment represents the high-water mark of South Carolina football in the past 30 years. 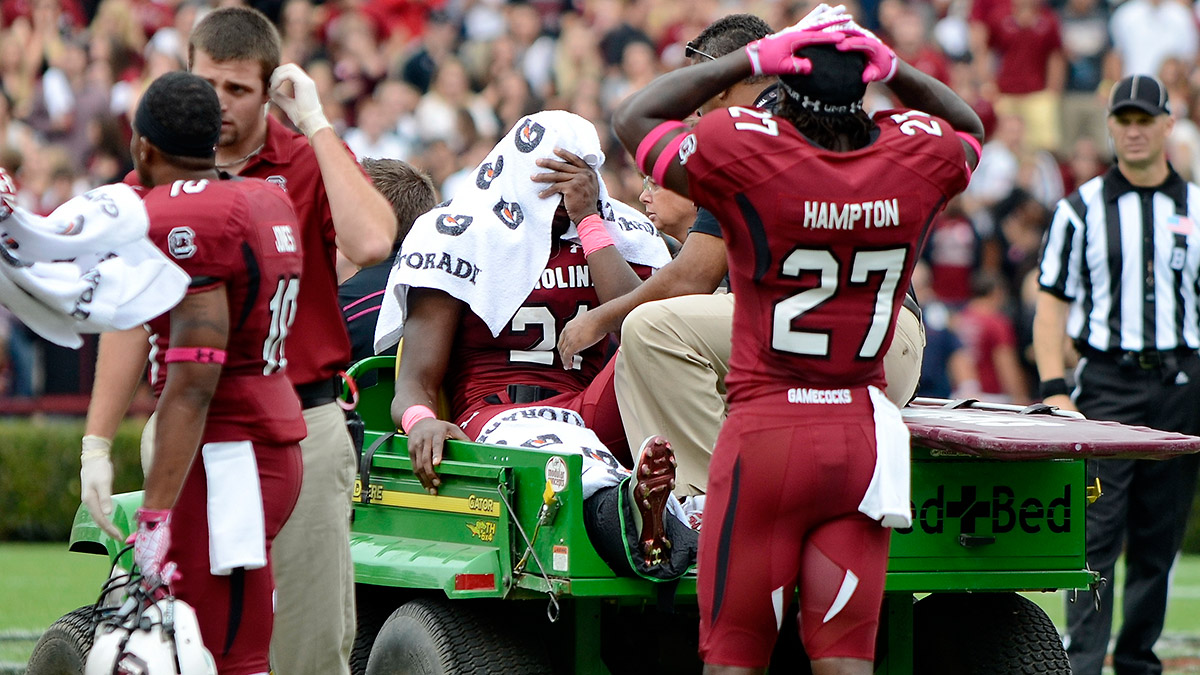 Lattimore collected a $300,000 signing bonus after the draft and will reportedly collect $1.7 million on an insurance policy, but that remains a fraction of what his NFL earnings could’ve been. It’s a loss for the game in general when the opportunity to watch great athletes perform at the highest level vanishes, and that’s sad enough. But the sociopolitical and economic ramifications make Lattimore’s story worse.

Lattimore directly contributed 3,444 yards from scrimmage and 41 touchdowns to the cause, at the cost of countless hours of work and the unimaginable physical agony that comes with being the title character in a game of Kill the Man With the Ball. His efforts led to the Gamecocks’ first SEC East title, first two 11-win seasons, and first two top-10 finishes in the AP poll. They also led to a boost in recruiting3 that helped make that success sustainable.

He generated the first legitimate Heisman buzz around a South Carolina player in 30 years and broke a tradition, dating back to Steve Taneyhill, of the Gamecocks’ offensive star being some grade of douche bag. He sold tens of thousands of no. 21 jerseys at $60 apiece, and was the star attraction in a show that sold in the neighborhood of 1.7 million tickets in his three years on campus while also attracting countless more TV viewers.

Indirectly? The success of the football team since Lattimore’s arrival plus a renaissance for baseball and women’s basketball paved the way for South Carolina to spend $37 million in 2012 on improvements to Williams-Brice Stadium and the surrounding grounds, including $6.5 million for a new video scoreboard that’s about two-thirds the size of an NBA basketball court. The university pays Spurrier — who, as one of the few major coaches whose views on unpaid labor are more advanced than those of the people who founded the state of South Carolina, is hardly the bad guy here — $4 million a year, more than three times what he made when he signed on in 2005. Meanwhile, you can walk two miles up Assembly Street from the stadium to the State House and see where the state government has been assiduously slashing funding for anything that might promote education, learning, or the arts.

So what did Lattimore get for his contributions? A scholarship that paid for most of three years of college and prevented him from seeing a dime from the sale of merchandise that bore his number and the sale of tickets and television carriage fees bought by people who wanted to see him play. The promise that his time would come when he cashed in with the NFL. And the knee injuries that left him physically unable to cash in once that time finally came.

In his retirement statement, Lattimore described the bargain he made in heartbreaking terms:

I have given my heart and soul to the game that I love, and it’s time for me to move on to the next chapter of my life and help others. I have given every ounce of my energy toward making a full recovery from my knee injury, and I have made a lot of progress. Unfortunately, getting my knee fully back to the level the NFL demands has proven to be insurmountable.

This story is all too familiar; if Lattimore and Tyrone Prothro haven’t started a club already, they should. After last week, Laquon Treadwell and Connor Halliday might need a place to hang out after class.

That’s what college football’s exploitation looks like on a human scale, with a name and a biography and an NFL contract left on the table. Lattimore, at least, was able to rehab on the 49ers’ dime for two years, and now that he’s returning to South Carolina to finish his degree, university president Harris Pastides has said the school could find a job for him if he needs one.

But when a person like Lattimore suffers a career-ending injury while serving his school for no pay, making him whole shouldn’t be an act of kindness or compassion, as it is here. It should be the norm. It should be required.

And it’s for the sake of people like Lattimore that the NCAA, as we know it, must be destroyed, or at least reformed into something that doesn’t look so uncomfortably like indentured servitude. But as is too often the case, change, even if it is inevitable, comes only 4.8 yards at a time.

Tales From the NFL Quarterback Carousel: The Texans Win, the Bucs Lose

Champions League Roundup: So You Wanna Be a Big Club, Liverpool?