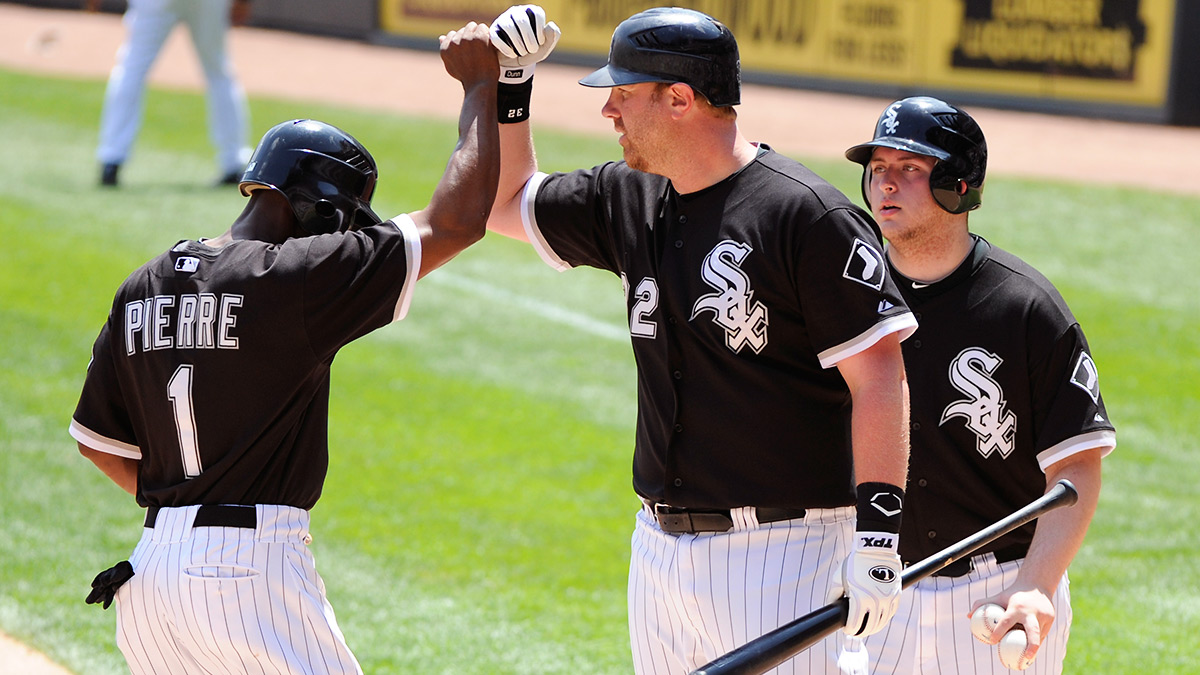 Adam Dunn, who retired at the end of last season, and Juan Pierre, who officially retired on Friday after sitting out 2014, were selected in the same draft class in 1998. They both played in the majors for 14 years, including one year as teammates with the White Sox. They finished seven games and 48 plate appearances apart. In playing time, they were twins.

In appearance and playing style, though, they were Twins. At 6-foot-6 and (by the end of his career) 285 pounds, Dunn had eight inches and 105 pounds on Pierre, and their listed dimensions may have undersold the difference. True to their physical forms, Dunn was a lumbering slugger, while Pierre was the Platonic ideal of the speedy slap-hitter. Pierre made 82 percent of his starts in the leadoff slot; Dunn made 83 percent of his starts batting third, fourth, or fifth. Pierre, who often went the other way, has one of the highest ground ball rates on record; Dunn, who put the ball in play in only half of his plate appearances, pulled his grounders and preferred flies. Pierre surpassed Dunn’s career stolen-base count in three separate seasons; Dunn had only one season in which he failed to top Pierre’s career home run total. Pierre rarely walked; Dunn often did. Pierre almost always made contact; Dunn whiffed with abandon. Pierre played a plurality of his defensive innings in center, while Dunn DH’d and hid at the corner positions, where his glove could do the least damage. Even their effort levels inspired dramatically different reviews. According to Marlins beat writer Juan C. Rodriguez, “nobody played [baseball] … with more passion than Pierre.” According to former Blue Jays GM J.P. Ricciardi, Dunn “[didn’t] have a passion to play the game that much.”1 One would be hard-pressed to design two less similar position players with staying power from scratch.

So, which one was better?

Until fairly recently, it would have been almost impossible to say. Pierre had the higher batting average, but Dunn had big edges in on-base and slugging. Dunn hit dingers and drove in runs, but he was a nonfactor (or worse) when he wasn’t in the batter’s box. Pierre versus Dunn would’ve been a great debate during their peak years, but without any possibility of a real resolution, partisans on either side could have cherry-picked stats and constructed arguments that jibed with their preexisting beliefs about baseball. Eventually, the discussion would’ve devolved into warring baseball buzzwords. Table setter! Run producer! Pesky! Powerful! Out-maker! Base-clogger!

Now, however, the Pierre-Dunn dilemma is a perfect example of why WAR (or an equivalent total-value statistic) is a useful tool for making accurate comparisons between players. Pierre and Dunn fall on opposite ends of baseball’s skills spectrum: We can say where each one struggled and where each one excelled, but we can’t eyeball or even back-of-the-envelope what their respective abilities were worth. For that, we need a statistical trellis — some structure that supports and guides our attempt to isolate each player’s value.

That’s what WAR does. When we examine Dunn and Pierre through each of WAR’s component parts, each player’s total contribution becomes clear.

Only someone who’s been blinded by batting average could miss Dunn’s huge edge here. Pierre debuted in 2000, the year with the highest home run rate in history. Early in his career, he played his home games at Coors Field before the humidor restored some sanity to the stats. Even in the most offense-first environment imaginable — the year before Pierre’s promotion, Dante Bichette batted .298/.354/.541 with 34 home runs for Colorado and finished two wins below replacement level — Pierre had no power. In 1,542 plate appearances for the Rockies before the team traded him to Florida, he hit three home runs.

A Pierre apologist might object that Pierre wasn’t expected to hit home runs, but we still have to debit him for the things he didn’t do. In stark contrast to Dunn, who walked, struck out, or homered in 50 percent of his plate appearances, Pierre had the lowest three-true-outcomes percentage (11.6 percent) of any hitter with at least 1,000 PAs from 2000 to 2014.

Admittedly, Pierre’s speed gave him an edge over Dunn on batted balls: Pierre had 200 bunt hits to Dunn’s zero, and he reached on error 104 times to Dunn’s 35. And there were a few years when Pierre drew enough walks and had a high enough BABIP to be average or better on offense. But Dunn, despite his strikeouts and inability to beat out ground balls, was better than average in every season but one. He walked almost three times as often as Pierre, and he hit 40 or more homers six times. That combination of patience and power is impossible for a player like Pierre to match.

Pierre led his league in stolen bases three times, but he led his league in times caught stealing seven times. He finished with a 75.2 percent success rate — not that far above the break-even point at which steal attempts make mathematical sense, especially since some of his seasons came in high-homer environments, where runners on base were more likely to score without advancing on their own and outs on the bases were especially costly. Still, while he wasn’t Raines-ian in his ability to beat throws, Pierre was prolific. Dunn’s success rate was slightly lower than Pierre’s, and his attempts were relatively rare.

Pierre’s speed also led to a 51 percent Extra Bases Taken Percentage, the rate at which a runner advances more than one base on a single and more than two bases on a double. Dunn retired with a 31 percent XBT rate, and he also advanced less often on outs. Those differences add up, negating some of the advantage Dunn gained by delivering extra bases with his bat.

Compared with his peers, Pierre was a so-so defender; a bit below average, according to Baseball-Reference’s rating (a combination of Total Zone and Defensive Runs Saved), and a bit above average according to FanGraphs’ (Ultimate Zone Rating), which credits him for strong range but dings him for his weak arm.

But for a large part of Pierre’s career, his peers were center fielders, among the most skilled defenders in baseball. Dunn’s peers were first basemen and corner guys — baseball’s defensive dregs — and still his stats were embarrassingly bad. Only two players have amassed fewer fielding runs than Dunn’s minus-173; his combined minus-43 at first base and in the outfield corners for the Nationals in 2009 gives him the worst-ever single-season total.2 Small-sample defensive stats are suspect, but here, they’re telling: Dunn moved like he was always wearing bronze shoes attached to a plaque.

As noted above, fielding runs compare players to the average player at the same position. So how do we account for the fact that some positions are more challenging than others? We apply positional adjustments, which are derived from the performance of players who’ve changed positions in the past. Pierre takes only a tiny hit because the credits from his years in center balance out the debits from his years in the less challenging outfield corners. Dunn, meanwhile, takes a huge hit from exclusively playing “easy” positions. Designated hitters, as one would imagine, incur the stiffest penalties of all, and Dunn DH’d for parts of 12 seasons.

This is the “Above Replacement” part. WAR assesses wins relative to a replacement-level baseline instead of an average baseline: Average players have value, and “Wins Above Average” would judge a long-lived average player no more favorably than an average player who lasted for only one season. Pierre and Dunn were both durable, making only one DL appearance apiece, which helped them accrue a higher career replacement runs adjustment.

Each system adds a final tweak. Baseball-Reference grades each player on his ability to avoid double plays, and Pierre comes out ahead here, but not by as much as you’d think: Although Dunn had more than 500 extra opportunities for a GIDP, he hit into only eight more than Pierre. Striking out and hitting fly balls has its advantages. Meanwhile, FanGraphs incorporates a separate adjustment for league strength, and Dunn gets a small boost for spending slightly more time in the American League, which has been the more difficult league for most of the millennium.

So, which player comes out ahead? If you’ve been adding up runs — or reading Tom Tango, who’s made this observation before — you know that the great Pierre-Dunn debate is based on a trick question: Neither one was better. Dunn and Pierre finished with exactly 16.6 WAR, according to Baseball-Reference. FanGraphs has Pierre half a win ahead, 23.2 to 22.7, but a fraction of a win is well within WAR’s margin of error over the course of a career. Essentially, both systems are saying that the two players were equally valuable; B-Ref just adds a little emphasis by saying so down to the first decimal point. Before WAR and its predecessors, we had no way to reach this counterintuitive conclusion.

Although WAR reveals that Pierre and Dunn were equally valuable to their teams, their teams weren’t equally generous to them. From a financial perspective, it was far better to be Dunn, who retired with $112.7 million in career earnings, almost twice Pierre’s $57.1 million take. When economist Matt Swartz studied spending on free agents in the Hardball Times Annual 2013, he found that defense, baserunning, and contact were all undervalued skills, and that walks weren’t, which helps explains the disparity. More’s the pity for Pierre. On the other hand, WAR reveals that Dunn and Pierre were both lucky to be as well known as they were; given that an average player amasses roughly two WAR in a single full season, Dunn’s and Pierre’s career totals aren’t particularly impressive. As Bill James once wrote, “Specialists and players who do two or three things well are overrated; players who do several things well are underrated.” Dunn’s power and walk rate and Pierre’s contact skills and speed made them more visible than the more well-rounded (but less eye-catching) recent retiree Mark Ellis, who produced far more WAR in far less playing time.

As Neil Paine pointed out last year, Dunn was a sabermetric bellwether: He debuted at a time when a vocal minority was primed to point out that batting average was a limited stat, that walks had worth, and (mistakenly) that defense didn’t matter. Naturally, Pierre was caught in the crossfire: The pages of Fire Joe Morgan are filled with defenses of Dunn and snark about Pierre. In retrospect, the debate over Dunn and Pierre — and, by extension, over contact and speed versus patience and power — seems as silly as an argument about breaking an egg at the big end or the little end. We now know that both sides were right in one sense and wrong in another, and that both players’ methods worked almost equally well. Fortunately, the framework of WAR allows us to say so, even as the implementation of its components continues to be refined.

Pierre and Dunn are the John Adams and Thomas Jefferson of their generation. They rose to prominence around the same time, became the focal points of rival factions, and, in their declining years, saw their differences reconciled. And finally, they exited the stage almost simultaneously, having left us in a far different place philosophically than we were when they arrived.