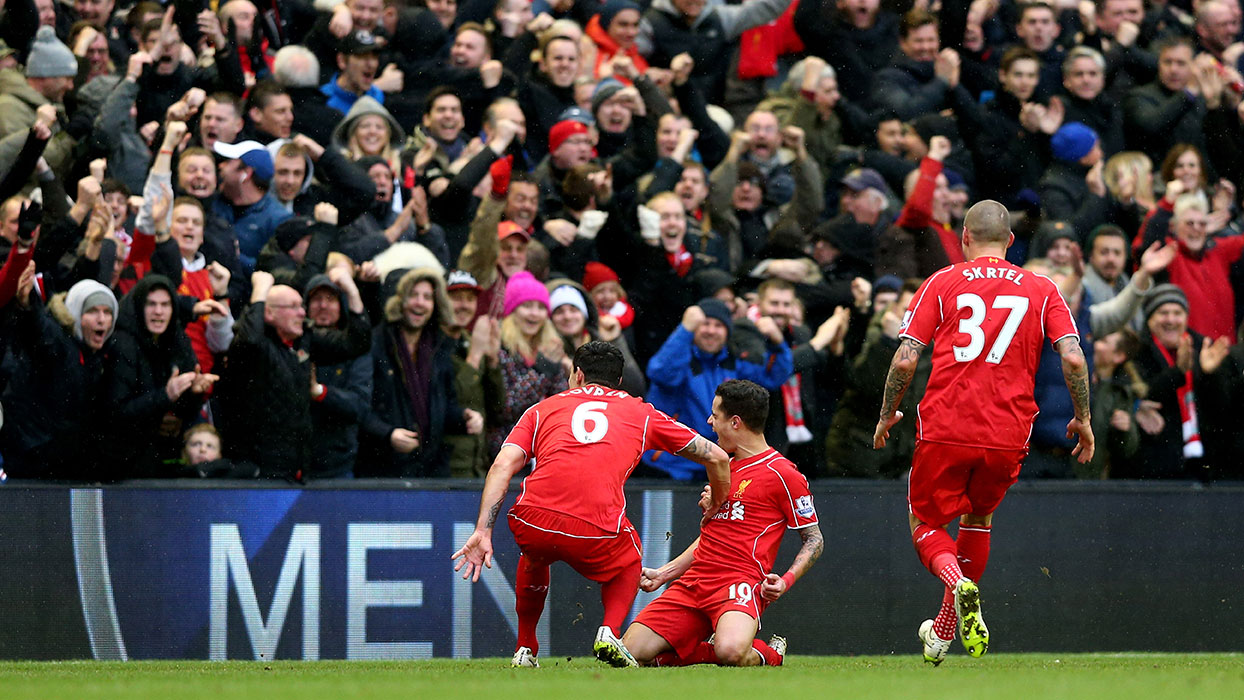 Uh-oh, it’s happening again. Yesterday against Manchester City, thanks to brilliant strikes from Philippe Coutinho and Jordan Henderson in a 2-1 win, Liverpool gassed up the pumpkin carriage, broke out the glass slippers, and set off on their second Cinderella run in two seasons.

As the Premier League table stands, the Reds sit in fifth place, a mere two points behind Manchester United in the final Champions League place and only three points behind third-place Arsenal. What seemed unlikely a month ago when they were in seventh, and impossible the month before that when they were in eighth, is now once again firmly within Liverpool’s grasp after they took a full nine points from three games against teams — Tottenham, Southampton, and City — that were ahead of them in the standings.

What Took So Long? 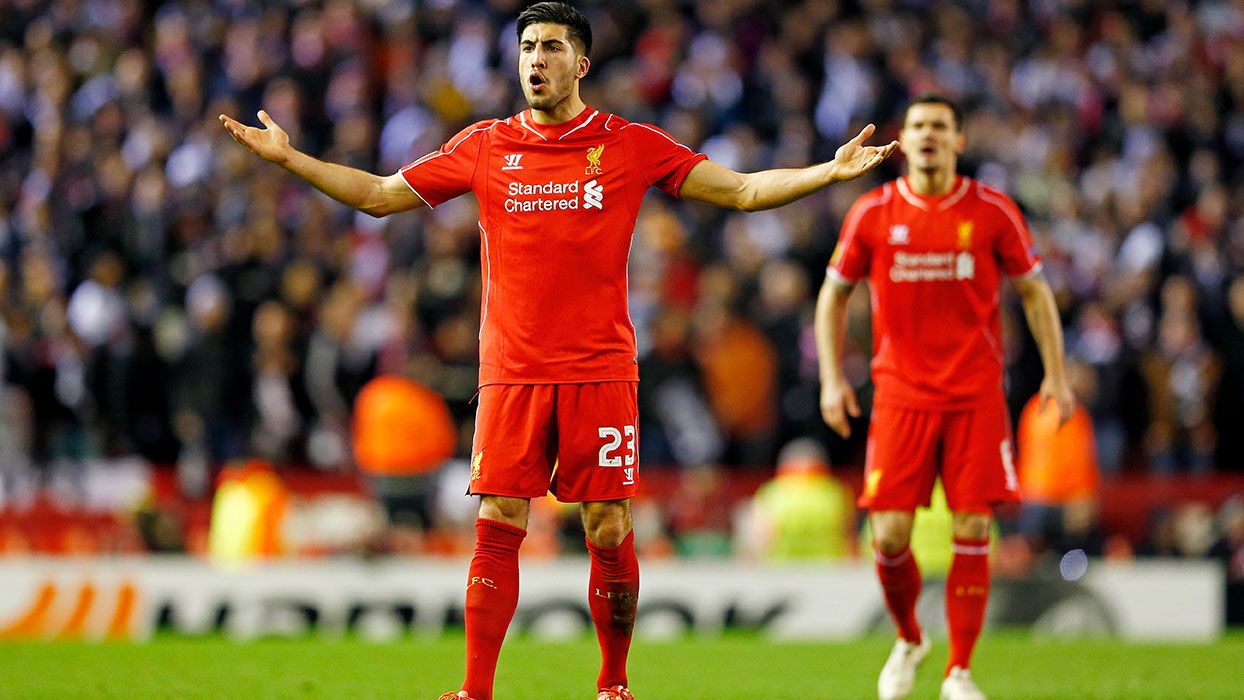 Since the calendar turned to 2015, Liverpool have certainly played like one of the four best teams in the Premier League, if not the best one or two. In fact, the dirty little secret may be that this version of Liverpool might be better than the group that came so close to an unexpected title in 2014. With Luis Suárez and a healthy Daniel Sturridge up top and Steven Gerrard shoehorned into the deep-lying playmaker role, last year’s group certainly had more firepower, but in order to utilize that firepower, manager Brendan Rodgers had to make a deal with the defensive devil. Liverpool had to tempt teams into track meets and then just hope that their attack would always be able to score more goals than the opposition’s. We all know how that turned out.

This year’s group can’t reach those attacking highs, but more often than not, they don’t have to. With the team no longer beholden to Gerrard, who is injured and has slowly been marginalized in his last season with the club, the defense, buoyed by a shift from a back four to a back three, has become a strength. Jordan Henderson and Lucas Leiva when he’s healthy — or Joe Allen when he’s not — are much better suited to be aggressive and rangy in the center of the midfield. Emre Can, presumably also a center midfielder by trade, continues to make the right center back position his own. And all of that added solidity allows left wingback Alberto Moreno to be aggressive, a trait that burned Liverpool repeatedly earlier in the season. The opposite wingback spot has been home to one of Liverpool’s seemingly infinite collection of young wingers: 19-year-old Jordon Ibe, who will miss several weeks with a knee injury, has been a revelation and may be the most talented of the bunch, but Lazar Markovic, Adam Lallana, or even Raheem Sterling can also drop back from the attacking ranks and play there.

Sterling, though, is usually too valuable at the top of the attack to make that move. Shifting him into the striker position was the last piece of the puzzle that truly set Liverpool on their run up the table. That shouldn’t necessarily be rocket science, as he’s Liverpool’s most dynamic scorer and best attacker, but players who start their careers on the wing frequently never become comfortable leading the line of attack. Sterling, though, has been so good, and the three-man weave of him, Coutinho, and Lallana has been so effective, that Sturridge, he of the 21 goals and seven assists last season, won’t be a given to automatically return to the starting lineup once he’s fully healthy. 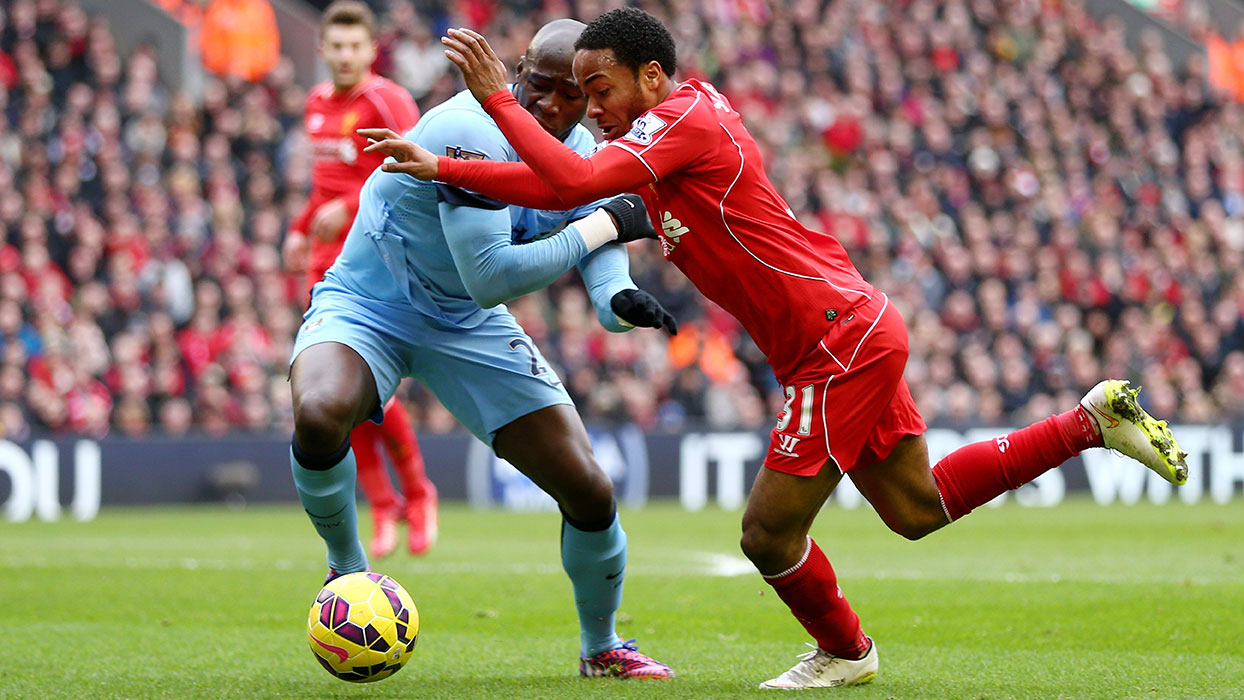 Yes, so if you’re counting: Apparently all Liverpool had to do to become really, really good is switch to a totally new formation, play a winger at striker and a midfielder in defense, and bench a living legend. Maybe it’s not surprising, after all, that it took Rodgers half a season to find the right mix. But since his team scuffed its way through the first half of the season, Liverpool now need to replicate something close to last season’s nearly flawless stretch run if they’re to finish in the Champions League places. And no matter how good you are, winning 11 of 11 (or something close to it) is a really tall order.

Take yesterday, for example: The Reds simply weren’t that much better than Manchester City. When it was tied, City often seemed perfectly happy to maintain control and not attack aggressively. Manuel Pellegrini’s side only had eight shots, but five of them came when they were losing by a goal.1 During the long stretches of time with the score even, City seemed more intent on keeping the ball, an approach that was made clear when Pellegrini brought on midfielder James Milner for striker Edin Dzeko in the 58th minute.

City’s strategy was working. Whether it was actually a good strategy is another matter entirely,2 but there were only three shots combined in the second half before the 75th minute — when this happened.

That’s an inch-perfect laser beam, and it’s unclear how it didn’t scorch a hole in the back of Joe Hart’s net. But it’s the kind of goal that defenses aren’t at fault for, and it’s one that even the best ball strikers can only pull off occasionally.3 At the same time, it’s the kind of goal required to beat a defense that’s decided it’s done taking risks.

Last year, Liverpool careered down the stretch behind the strength of absurd late goals in wide-open games, lurching from one cardiac event of victory to another. This year’s version is more measured, more balanced, more of a full team endeavor. But what’s no different is that in the second half of the season Liverpool just don’t lose. Last year’s streak took them almost to the top of the Premier League, and this year’s run could take them back to the Champions League. With each passing game it’s getting harder and harder to see them coming up short. But that’s the thing about streaks: They work right up until the point when they don’t.

The Monuments Men: Inside the Mad Scramble to Bring You Your Annual NFL Championship DVD