Tales From the NFL Quarterback Carousel: The Texans Win, the Bucs Lose 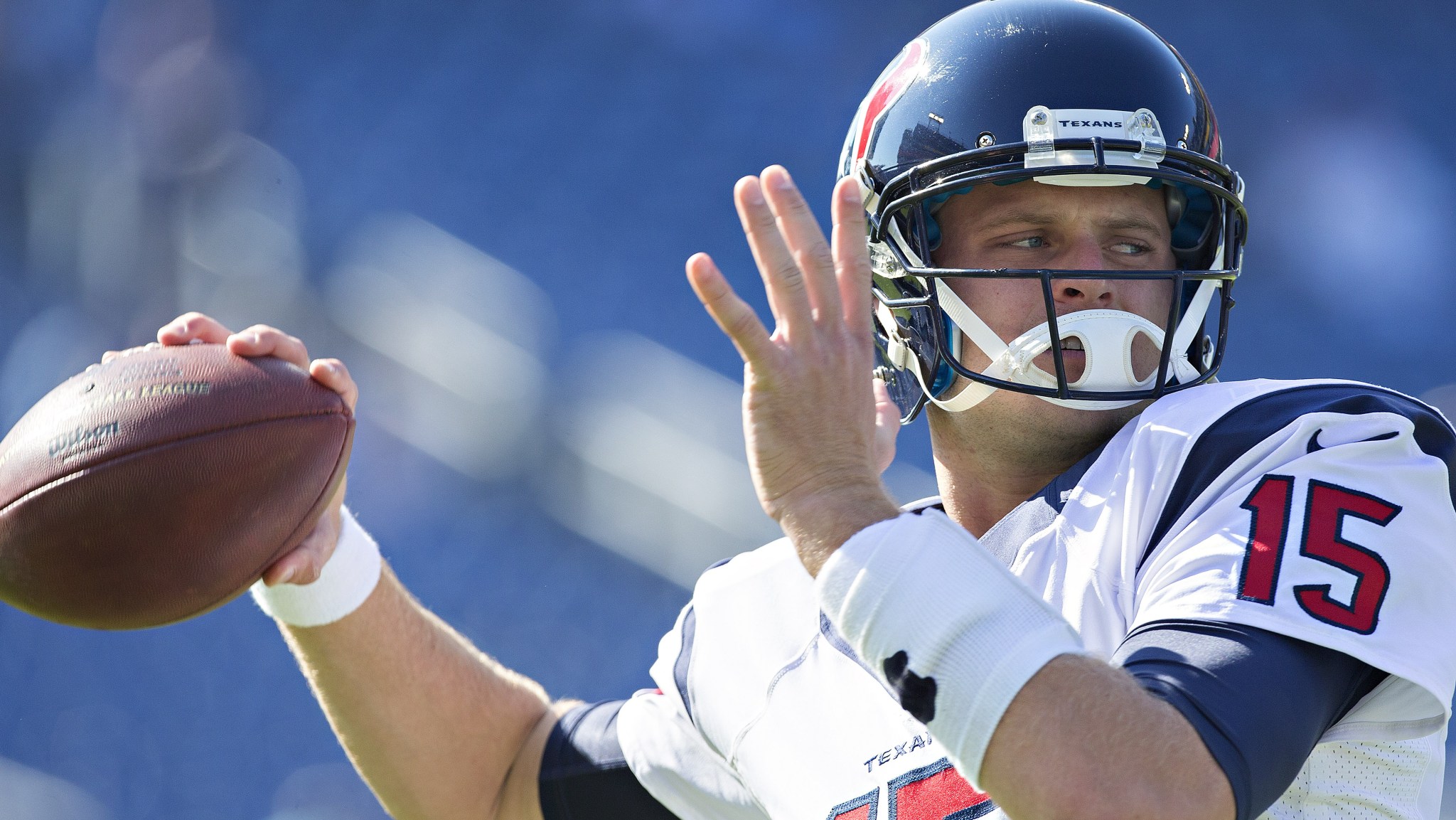 The wheel of NFL starting quarterbacks simply never stops spinning. After Mark Sanchez was forced into the lineup for Nick Foles last weekend, two more NFL teams made quarterback changes. By my count, those are the 14th and 15th times this year a team has made a permanent change at the game’s most important position. Just 18 of the league’s 32 teams have managed to make it to Week 10 with the same quarterback they had in mind at the beginning of the preseason.

Both of this week’s benchings are born out of desperation, as virtually all unforced quarterback benchings are, but they also come from wildly different angles. One makes absolutely no sense. The other could not make more sense.

Let’s start with that logical decision. Houston benched Ryan Fitzpatrick on Wednesday, turning the reins of the offense over to untested backup Ryan Mallett, who the team acquired from the Patriots at the end of training camp for a conditional draft pick. The move brings an end to the Fitzpatrick era in Houston after nine games. I don’t think anybody would suggest that Fitzpatrick has been great, but has he really been worse than what the Texans could have expected when they signed him to a two-year, $7.25 million deal this offseason? Here are Fitzpatrick’s career numbers heading into the season and his rate statistics from this year:

If anything, Fitzpatrick has been better than the Texans could have hoped. It’s fair to assume that some of that rise in yards per attempt comes from extra work done by DeAndre Hopkins and Andre Johnson after the catch, but Fitzpatrick’s passes have produced an average of 5.2 yards after catch this season, which is 20th in the NFL. QBR should adjust for that and keep Fitzpatrick’s passes themselves as the primary measure of performance, and his QBR has stayed virtually the same; he had a 45.5 QBR through the 2013 season1 and has a 45.3 QBR this season.

The biggest problem for Fitzpatrick has come on third downs. Houston’s above-average running game tends to leave Fitzpatrick in a pretty reasonable spot on third downs; his average third-down pass has come with 7.54 yards to go, the 10th-lowest figure in the league and virtually identical with Dallas (7.57 yards to go). The difference between the two? Dallas picks up a league-best 50.6 percent of its third-down conversions when it throws the ball. Fitzpatrick’s Texans moved the chains only 32.1 percent of the time when he threw on third down, the sixth-worst rate in the league. Only the Jaguars, Browns, Seahawks, Buccaneers, and Titans (a league-low 27.5 percent) have been worse.

OK. The third-down conversions are bad. And I know from watching Texans coaching tape that there are a few passes per game when Fitzpatrick either throws to a receiver in coverage, misses an open receiver with a throw, or doesn’t even see an open receiver downfield. I thought Fitzpatrick was going to be good enough for the Texans to be competitive, but he’s not an easy one to watch. He’s still the same quarterback who is responsible for my favorite post-interception reaction ever and one of my all-time favorite GIFs:

So, why make the switch now if Fitzpatrick has basically been the quarterback who was expected? Because that quarterback really isn’t very valuable for the Texans. Houston is 12th in rushing DVOA and 13th in defensive DVOA, even without first overall pick Jadeveon Clowney for most of the season, and it’s still just 4-5. If Houston had pulled out those close losses to the Cowboys and Colts and not blown that 13-0 lead on the road in Pittsburgh in a matter of minutes, it’s 7-2 and Fitzpatrick is just good enough to be a solution.

Instead, with a mediocre known quantity at quarterback, the Texans are on pace to go 7-9. The Texans are better off reaching for a higher-variance option, a quarterback who will either be so bad that they finish 5-11 and end up with a better draft pick, or so unexpectedly good that Houston finishes 9-7 and competes for a wild-card spot.

Mallett, who threw just four regular-season passes during his time in New England, is variance incarnate — an almost totally blank slate. His preseason performances have no predictive value. The Patriots valued him as worthy of a 2011 third-round pick after his limited college career, which saw Mallett throw 955 passes over three seasons at two schools. Crucially, Mallett completed just 57.8 percent of his passes over that time frame, a figure that at least raises red flags about how accurate he might be at the professional level.

Mallett is in the final year of his rookie deal, so his performance over the next seven games could be worth millions of dollars to his future. The difference between a viable young quarterback about to hit free agency and a big-armed guy who played poorly in a half-season sample is, oh, maybe $10 million in guaranteed money.

The Texans were linked to Mallett incessantly after they hired Bill O’Brien, his former coach in New England, but rightfully held off on acquiring Mallett until the Patriots had no leverage and could only deal him away for peanuts.

In a way, that was both the right move and the wrong one. The Texans surely paid less for Mallett than if they had traded for him in March. On the other hand, while Mallett already knew some subset of O’Brien’s system from his time in New England, by not arriving in Houston until the end of August, it undoubtedly took him some time to become familiar with Houston’s scheme and receivers. If he arrives in March, maybe Mallett beats out Fitzpatrick in camp and wins the starting job. Or, alternately, maybe Mallett proves in August that he’s not the right choice and the Texans realize Fitzpatrick is the lesser of two evils. In any case, I can’t fault Houston for what they did, both then and now. 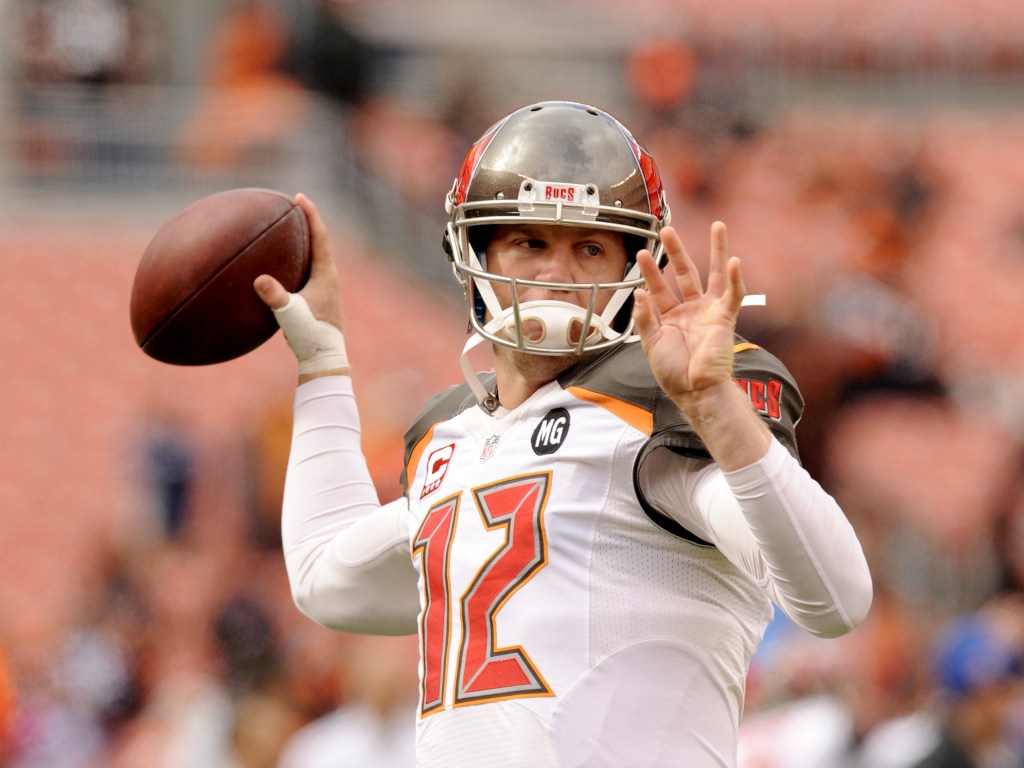 Darkness on the Edge of McCown

The Buccaneers? Faulted. Oh, are they faulted. The 1-7 Buccaneers made a quarterback switch Tuesday, benching second-year passer Mike Glennon for 35-year-old Josh McCown, who opened the season as the team’s starter. Glennon was not particularly impressive in McCown’s absence, but the baseline wasn’t exactly set very high, either. Glennon posted a 55.9 QBR in his six-week stretch as the starter, beating out McCown’s 47.1 QBR from September.

McCown, signed to a two-year, $10 million deal after an incredible five-start run as Chicago’s backup last season, had exhibited his former replacement-level performance during the opening three games of the year before suffering a thumb injury in Tampa Bay’s 56-14 loss to Atlanta. The injury prevented McCown from gripping a football until two weeks ago, but the Buccaneers kept him on the bench until deciding to make the switch for football reasons this week.

The language that Lovie Smith used to describe the move was almost bizarre. Smith said Glennon was still his quarterback of the future, but that he was starting McCown to try to give his team a “spark.” Dumpster fires give off sparks, I guess, but it’s hard to imagine the same McCown whose last start ended with the Buccaneers losing by 42 points suddenly inciting a winning streak in Tampa.

What do the Buccaneers gain from starting McCown? His 1,405 career attempts tell us he’s an eminently replaceable backup quarterback. That’s probably better than Glennon, but it’s not by much, and it’s of little consequence. The Buccaneers will almost surely cut McCown this offseason and avoid paying him his $4.25 million base salary for 2015, so Tampa Bay really is making this move to try to win more games now. It would be better if it were simply lying.

However, the Bucs shouldn’t be trying to win more games. No, I’m not suggesting they tank, but reaching out for veteran mediocrity in the hopes of finding a cold, unsatisfying level of competence is shortsighted and risk-averse. McCown, by definition, won’t contribute to a winning Buccaneers team during his time in Tampa. The Buccaneers’ 2015 first-round pick might, and the Bucs should want that first-round pick to be as high as possible.

If anything, Tampa Bay should be looking toward a higher-variance option at quarterback. Its third-string quarterback is 27-year-old Northwestern product Mike Kafka, a former fourth-round pick of the Eagles who bounced around several practice squads before ending up in Tampa Bay. His only regular-season work came in 2011, when he went 11-for-16 with two picks for the Eagles.

I’m not suggesting that Kafka is some sort of hidden superstar. I have no idea. But we know that McCown’s a mediocre quantity. At this point, we can be pretty sure that Glennon is mediocre. While Smith says that Glennon is the Bucs’ quarterback of the future, he wouldn’t be replacing Glennon with McCown if he really believed that. Kafka is probably not an NFL-caliber passer, but 16 attempts three years ago don’t tell us anything. There’s a slim chance that Kafka is Brian Hoyer or Austin Davis, third-stringers who made it from the practice squad into the starting lineup and emerged as viable NFL starters for peanuts. That would be a serious asset, one way more valuable than McCown or Glennon will ever be to this team.

And if Kafka turned out to be a total mess, that would also be good for the Buccaneers. It might even be better for them if he were a disaster, because they would have the best possible chance of finishing with the worst possible record and, consequently, the highest possible draft pick. The worst outcome for the Buccaneers would be to choose the option that diminishes the value of their draft pick while ensuring they have a zero percent chance of finding a long-term solution at quarterback this season. That is, somehow, exactly the option they have chosen.