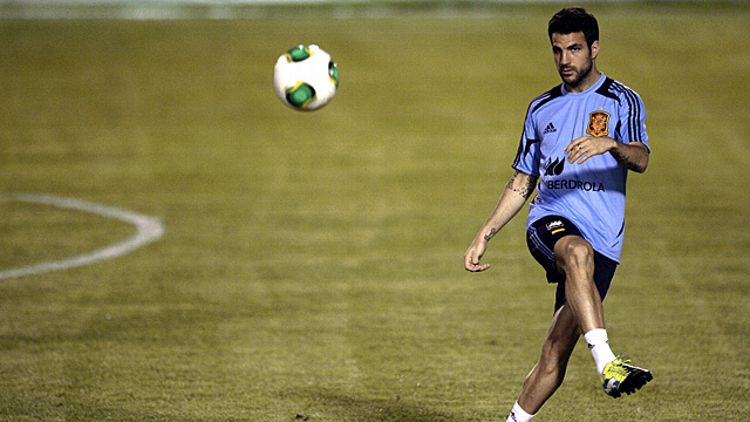 I really have no inside information as to whether Arsene Wenger and Ivan Gazidis, or David Moyes and Ed Woodward, or Jose Mourinho and whatever cabal of ex–Secret Service agents are handling Chelsea’s transfers spend a lot of time watching the end of The Godfather. I imagine they have better things to do. Wenger certainly does …

Regardless of their viewing habits, this is definitely the part of the European football summer transfer window when all Corleone family business gets settled. Financial Fair Play and contracts be damned, clubs are still allowed to pursue the players they please. The goal, as the buying club, is to improve your chances on the field. If you can take out Moe Green (a.k.a. cut the legs out from those closest to you in the league table) while you’re at it, then that’s just an added bonus.

The two big transfer rumors making the rounds this week exemplify this Corleone school of thinking.

The first rumor involves Cesc Fabregas, onetime captain of Arsenal, now of Barcelona. In 2011 the Catalan club bought Fabregas, a former Barça trainee, off the Gunners for €29 million. According to the Mirror, and several other outlets, there was a buyback clause included in the deal, allowing Arsenal the right of first refusal if Barça decides to sell. As clauses in contracts go, this one is not the most ironclad I’ve ever heard of, seeing as how, according to the Guardian, the clause is nullified if Fabregas doesn’t want to return to North London. Basically, Arsenal have the right to buy Fabregas if Barcelona want to sell him and Fabregas wants to leave. Which would make it more or less like every other transfer ever.

The story of Fabregas’s potential Barcelona departure has been picking up, losing, and gaining steam ever since the Confederations Cup, where Fabregas turned in a performance for Spain that mirrored his previous season with Barça; one that could be best described as “peripheral.” Was Barça souring on their returned prodigal son? Was Fabregas disillusioned with his role at the club? Well, Manchester United has about €25 million and they were going to find out.

David Moyes, in his first season in charge of the Red Devils, seems keen on rebuilding the United midfield in a post–Paul Scholes world. He made a run at Barça’s young gun, Thiago Alcantara, but lost him to Alcantara’s former manager Pep Guardiola and the German and European champions Bayern Munich. There have been rumors that Moyes would raid his former club, Everton, for Marouane Fellaini, but Fabregas has, over the last few weeks, become the prime target for United.

According to reports today, Fabregas wants to stay at Barcelona, unless Barcelona want to sell him to Manchester United. That’s a chess move. It’s now on Barça to make certain assurances to Fabregas about his role; he wants them to want him, and now they have to prove it.

With the loss of Alcantara, it’s almost unfathomable that Barça would sell Fabregas. But let’s tease this out a bit. He is apparently not going back to North London anytime soon. Were he to join United, it would be another Arsenal captain joining a rival to win things he could not with the Gunners. The thought of Cesc linking up with Robin van Persie must seem like a Hieronymus Bosch painting to Arsenal fans. Even if the move doesn’t happen, the talk about the transfer is a destabilizing tactic. It makes United look strong and Arsenal look weak. It’s a move Wenger is pretty familiar with by now; he’s been trying to do it to other clubs all summer, including United.

Unlike other offseasons, Arsenal have some money to play with this summer. After years of searching for, and often finding, bargains in the French league, Wenger can go after big-name talent. He has spent most of the silly season making eyes at Real Madrid’s Gonzalo Higuain. The Argentine striker could probably be bought for about €25 million. He has a great work ethic and no baggage. He would be a fantastic buy for a club who could use a flashy name to show they are serious about competing for a Premier League crown.

The Higuain transfer could be held up for any number of reasons, but one could be that Arsenal are too busy screwing with United and Liverpool to seal the deal. The Gunners have been rumored to have placed a €35 million bid for Luis Suarez and kicking the tires on a possible deal for Wayne Rooney.

“They are all realistic targets quality-wise, [but] not all of them are available to join us,” said Wenger, speaking from Arsenal’s Asian summer tour.

When Manchester City got well in 2008, they went on a shopping spree at Arsenal, lifting Samir Nasri, Gael Clichy, and Emmanuel Adebayor, to say nothing of hiring Arsenal legend Patrick Viera to manage their “Elite Development Squad.” Manchester City, like a new inmate trying to prove their mettle, picked a guy (Arsenal) and went after him (bought a bunch of their players). Whether or not these players were adequately replaced, the perception was that Arsenal was a feeder club to more financially powerful institutions like City. It’s a perception that Arsenal have had a hard time shaking.

Wenger’s possible pursuit of Suarez and Rooney turn the tables a little bit. Just last summer, United bought van Persie from Arsenal, a deal that broke the hearts of many Gunners fans. It adds a bit of drama to the Rooney rumors; you take one of our club legends, we’ll take one of yours.

Rooney seemed set to work things out with Moyes and United, until an injury forced him to return to England from United’s preseason tour. The rumor mill started up again: Was he really hurt? Is this the beginning of the end? Moyes didn’t exactly put fears to rest when he commented, “My thought on Wayne is that if for any reason we had an injury to Robin van Persie we are going to need him and I want as many options as possible.”

Today, we hear that Rooney is fuming.

I’m not saying that Arsenal have anything to do with this, but their interest in Rooney, along with Chelsea’s, provides leverage for him. If he knows he has interested buyers for his services, he can agitate for either a move, a new contract, or at least assurances about playing time and position. For Arsenal, it’s got two benefits: Either they get a world-class footballer in Rooney or, at the very least, upset the Manchester United applecart.

The Suarez rumors suggest the same thing. Liverpool is among three or four teams who could challenge Arsenal for their coveted Champions League spot in the top four. Were Arsenal to add to their strike force by severely depleting Liverpool’s … well, all’s fair in love and war and the Premier League. Nobody asks you to renounce Satan in that league, they just ask you to win trophies.