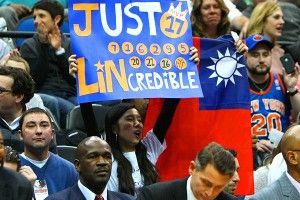 In a way, Wednesday night marked the end of an era. About five minutes into the third quarter of New York’s game against Sacramento, it became evident to everyone at Madison Square Garden that Jeremy Lin was not going to score 25 points or hit a game-winning buzzer-beater. After a quick, scintillating start, Lin settled into his role as a distributor. It’s as though he’s begun to set odd, nightly goals for himself — the 38 points against the Lakers, the 3-pointer against Toronto, and, in Wednesday night’s 100-85 win over the Kings, 13 assists. When he hit a jumper to secure a double-double, the Garden erupted. The game was laughably out of reach by then, but nobody felt like leaving.

We sat next to a father from the Bronx who had lost his mind to Linsanity. “DON’T MESS UP HIS ASSISTS,” he shouted early on, each time a fellow Knick failed to capitalize on one of Lin’s passes. “FIVE REBOUNDS. TRIPLE-DOUBLE. IT’S MY BIRTHDAY!” he begged, once Lin got his 10th point. His daughter carefully unrolled her “To Linfinity and Beyond!” sign, which charmed even the pun-weary (namely, me).

With about 9 ½ minutes left in the fourth quarter, the chants started: “WE WANT LIN. WE WANT LIN.” These are the low-stakes lures and side games that result from quarter-long garbage time. You want to see Iman Shumpert get his. You encourage Jared Jeffries to drive to the basket, you cheer on Toney Douglas for being so cool about losing his spot, you collectively will Jerome Jordan to stay on his feet. You boo the shit out of an opposing player who just so happens to share the name of one of the more scorned figures in recent Knicks history.

The cheers for Lin were proportional to the jeers for the Kings’ Isaiah Thomas, who might consider changing his last name to “no relation.” “DON’T SAY THAT NAME IN THIS BUILDING,” the guy next to me shouted each time the P.A. informed us of a Thomas contribution. “JUST USE THE NUMBER.” At one point, Thomas’ teammate, Jimmer Fredette — about whom I had completely forgotten — walked up to the line for a free throw. A block in the lower nosebleeds cheered him on — perhaps family and friends from Glens Falls who had caravaned down to the big city to bear witness to their own sensation. It was a sweet reminder that not everyone had grown tired of hearing about Jimmer last year.

There’s something a bit precious about Linsanity right now, particularly as a national item of interest. The veering-toward-uncomfortable, occasionally overcompensatory awe of pundits and fans. The slight, slight, slight condescension that all this amusement suggests. Wednesday night was the first time during this unlikely run when Lin began to seem “normal” — which, in this context, isn’t a bad thing. The pace of last week was unsustainable, and, for all the talk of perennial “underestimation,” he was simply never this good at Harvard. His game has evolved: He’s starting to develop that Matrix-like vision of the court, he’s grown stronger and plays with a lot more swagger now. The novelty is fun, but for the Knicks’ sake, works-in-progress like Wednesday night, when seven players scored in double digits and Lin hit a career high in assists, are better. New York doesn’t suffer the cute. There are other uncharted territories: more wins, maybe even a triple-double.