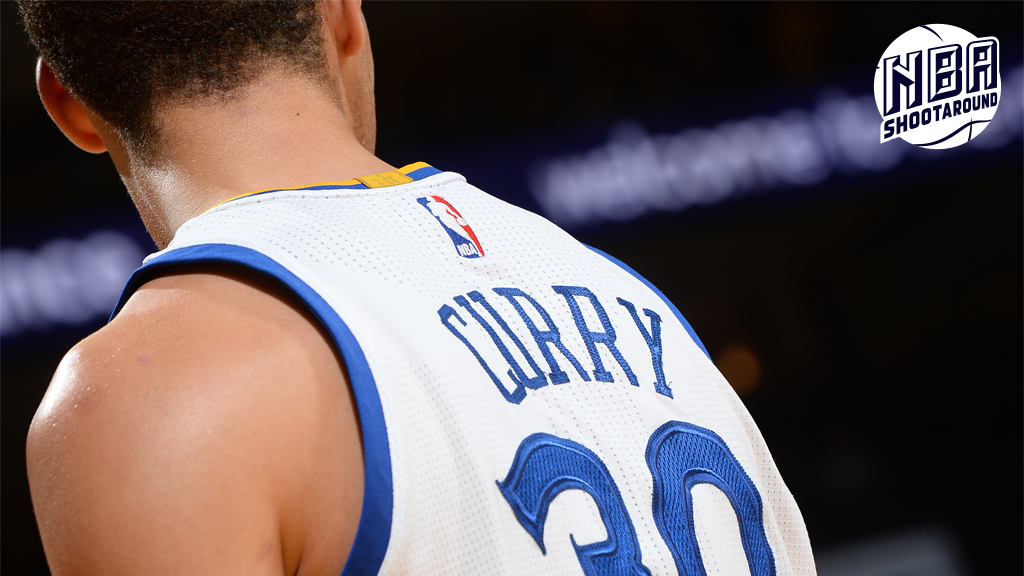 There’s Nothing Wrong With the Warriors

Ben Detrick: After being handed losses by Chicago and Utah over the last week, Golden State’s brilliant sheen developed minor smudges. So when the visiting Mavericks opened up a 24-4 first-quarter lead over the hometown cagers, you could hear a whisper on the wind: “What’s wrong with the Warriors?”

Nothing. Not when you have Steph Curry. He offered typical contributions as they clawed back by halftime — but he wasn’t transcendent. Then, in the third quarter, he morphed into a shimmering deity who hovered above all mortals and engulfed Oracle Arena in fire. There were gratuitous 3-pointers from 10 feet beyond the arc; spinning faux-passes into up-and-unders; pitter-patter crossovers and floaters that rainbowed gently over a furious Tyson Chandler. One step-back sent J.J. Barea skittering across the hardwood like a puppy atop a frozen pond.

Chef Curry stirred up 26 points in the third quarter alone, giving him 41 at that point.

As Golden State pulled away in the fourth quarter, it was uncertain if Curry would reenter the game. Warriors fans silently rooted for the Mavericks to mount a modest comeback — which they did. So he returned, with his career high of 54 points (set in 2013 against the Knicks) distant but visible through a sniper’s scope. As he brought his point total to 51 and the Warriors seized control, the dwindling clock presented an ethical issue. At what point did personal glory become bad sportsmanship? On Golden State’s final possession, Curry passed the rock to Splash Brother Klay Thompson instead of attempting to match his high-water mark — thereby achieving neutral buoyancy. 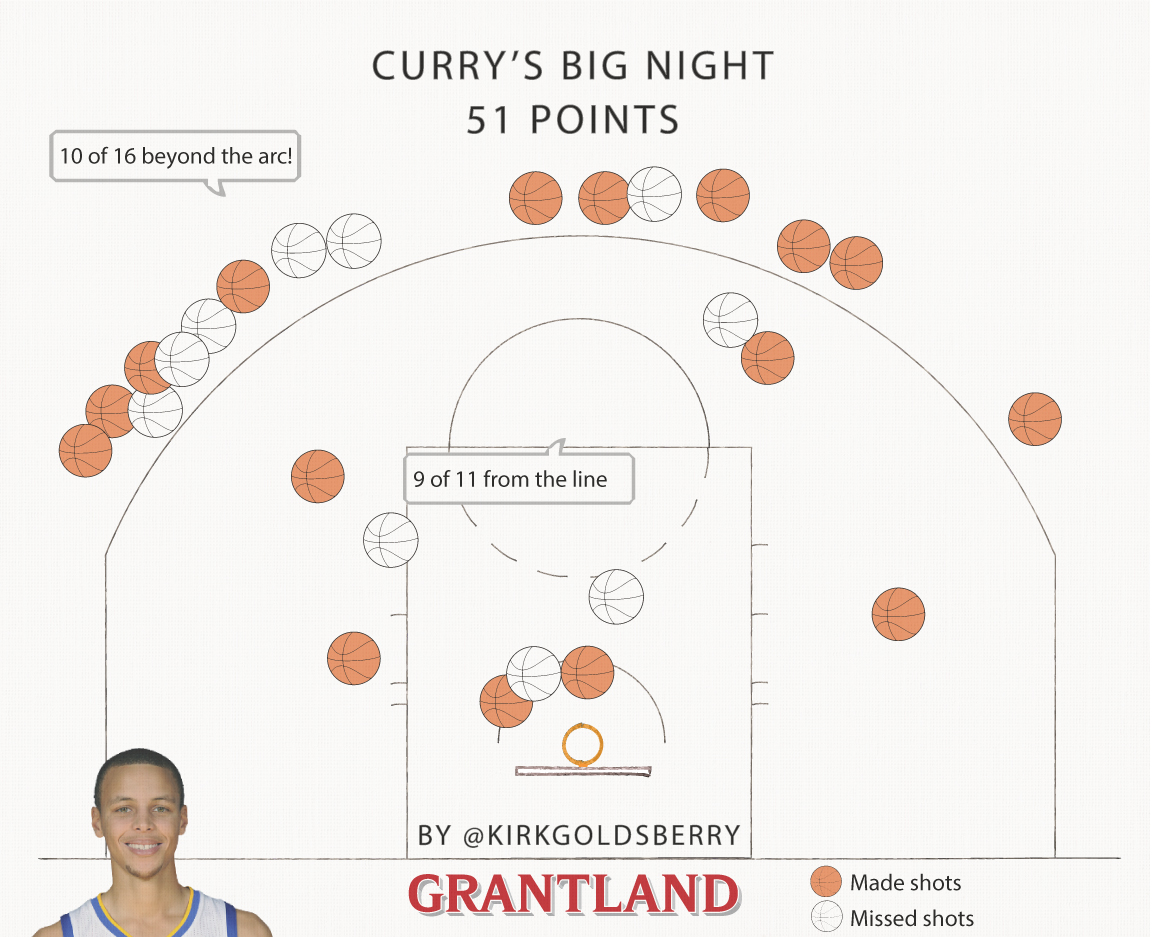 Kirk Goldsberry: On a normal Wednesday, Russ Westbrook tying his career high in points would’ve been the most impressive point guard story. But Steph Curry has a habit of stealing the show, and at some point last night, let’s call it “the third quarter,” he decided he didn’t want to lose. Then he doused the ball with kerosene and went to work. He scored 26 points in the third frame and helped the Warriors turn a 22-point deficit into a 14-point victory.

Push It to the Limit 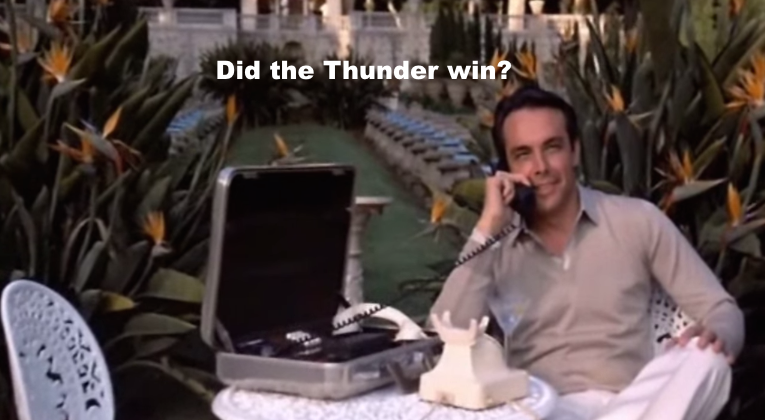 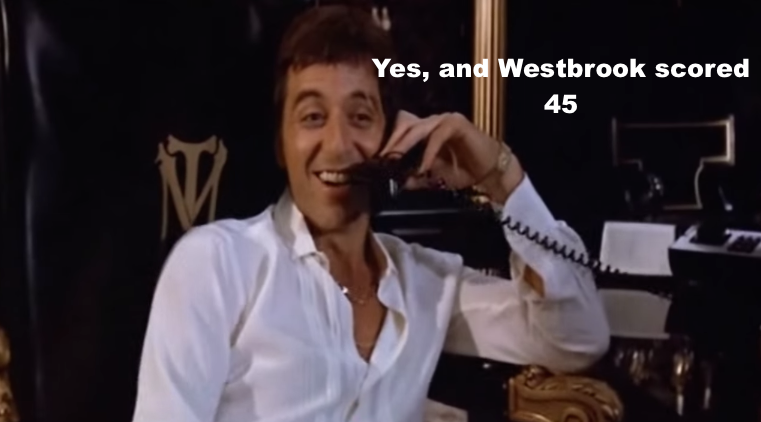 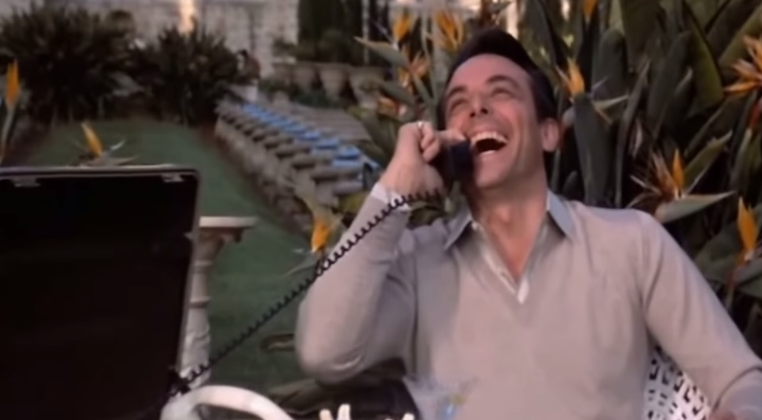 Jason Concepcion: Russell Westbrook is sporting a usage rate in excess of 37 percent. That’s the kind of usage rate that Kobe Bryant’s usage rate gives a respectful nod to after sending over a couple of cigars and a bottle of fine Scotch. If that magnificent level of possession commandeering holds, it would be among the highest ever.

Against the Pelicans on Wednesday night, with Kevin Durant sitting again due to a toe ailment, Westbrook scored 45 of his team’s 102 points, with six rebounds and six assists. It was a team performance that symbolized all the problems and troubling philosophical fractiousness that have haunted the Thunder this season. Then it transcended those problems with 98 percent pure, un-stepped-on basketball cocaine.

There have been key injuries, weird chemistry, an occasionally painful-to-watch carousel of isolation offense. No OKC player not named Russell or Kevin has made a consistent scoring impact, Andre Roberson is playing like a silent fart on a long road trip, and Reggie Jackson’s overall production is dwindling to famine levels. Kendrick Perkins outscored Jackson last night — six points to four, on one fewer attempt. These are troubling signs.

But having the luxury of being able to dive face first into the fiery basketball megalomania of Russell Westbrook has a way of making a team’s problems disappear in a cannonade of finger guns.

Watching Westbrook last night was like watching the “Push It to the Limit” montage from Scarface. By which I mean — surely, OKC cannot continue to live this kind of lifestyle, but, holy shit, is that a fucking tiger? Russ played as one would expect, with the barely focused aggression of 10,000 exploding stars.

And not a moment too soon. OKC came into Wednesday one back in the loss column behind the denizens of Smoothie King, who, not incidentally, happen to be playing their best basketball of the season.

The Thunder still need to beat the Pelicans back in Oklahoma City on Friday to keep the Pels from locking up the season series tiebreaker. Perhaps Kevin Durant will be available. But, even if he isn’t, OKC still has Russell to push it to the limit. Limiiiiiiiiiiiiiiit.

Woke Up an Optimist

Jason Gallagher: This song did nothing for me when I first heard it. Then I found out it was written about Durant and Westbrook and now I can’t stop listening.

They’ve been through everything together — from overachieving on the sunniest of days to fighting through the most violent of storms. Most locals still believe in Russ and KD, even though the worst possible outcome is the likeliest. The hope doesn’t rest on the coaching or potential trades, it rests on the shoulders of two guys — friends — who refer to each other as “brothers.” They’ll be immature along the way, of course. They usually are — especially Russ. But it’s that immaturity — that inability to restrain themselves from acting out their raw emotions — that brings out the amazing in this team.

God, I hope they never stop playing together.

The Hawks Are Not Cool

BREAKING: Our starting 5 will share East Player of the Month honors for January! pic.twitter.com/Fp1zsV684F

Andrew Sharp: I’ve had an unpopular opinion for months, and I’ve been holding it back from you, the readers. It’s time for that to end.

The Hawks are not cool.

The campaign to make the Hawks cool needs to end.

Kyle Korver is cool, Dennis Schroder is great, but everyone else could disappear from the NBA tomorrow and nobody would miss them. Jeff Teague? We have John Wall and Steph Curry. Al Horford? Imagine the exact same personality as Tim Duncan, but half the talent and twice the injuries. Paul Millsap? As exciting as a telephone pole. DeMarre Carroll and Mike Scott? They could start a D-League game this weekend and nobody would blink.

I get it. Atlanta likes the Hawks because anyone can enjoy a team that wins this much. Atlanta deserves this. And if you’re not from Atlanta, saying you “just love what the Hawks are doing right now” is a great way to prove you’re a smart basketball fan.

Count me out of what’s happening here. We’re giving entire teams player of the month now? This is not cool. If I wanted to see grown men fall all over themselves to worship B-list talent, I’d watch college basketball.

The other day, SportsCenter had a Hawks “pass counter” onscreen during a highlight package. Are you fucking kidding me?

I hope this bandwagon ends up at the bottom of a lake.

Interview with Hawks starters. I love the unselfish dynamic of this TEAM #ATLShawty – via @SportsCenter http://t.co/oUUkmgYcZF

For the record, the Heat played “team basketball” when they won 27 games in a row a few years ago, but nobody was falling over themselves to congratulate the Heat on the genius of their unselfishness. And you know why nobody said that? Because the Heat had players who were actually good. The Warriors play team basketball too. But it’s more fun to note that Steph Curry and Klay Thompson were sent here from outer space than turn into a JV basketball coach marveling at the sets they run.

Don’t get me wrong, the Hawks are absolutely a great team. Tough on defense and borderline un-guardable on offense. At least twice during last night’s Wizards game, a pass-pass-pass-wide-open-3 sequence made me stop and say, “Hooooooly shit they are good.”

But while we wait to see if their approach works in the playoffs — it might! — let’s take it down a notch. The Hawks can be good, and also the corniest team in the league. People talk about them the same way they talk about the St. Louis Cardinals. Every win is a testament to hard work, and humility, and culture. It’s fine if you’re into that sort of thing, but I’m not. I didn’t come here for pass counters and flat-footed Pero Antic jumpers.

Show me the best sport in the world. Show me Durant in God mode. Show me Giannis going 900 feet in two steps. Show me the reckless 26-foot Jamal Crawford step-back that falls anyway. Show me Kobe cursing out the Lakers front office on a secret cell phone video. Show me Anthony Davis flying in from half court. Show me Dion Waiters standing in the corner calling for the ball. Show me anything but the fucking Hawks.

[Refastens straitjacket, prepares for Hawks to win the NBA title.]

On the Other Hand …

The Hero They Need 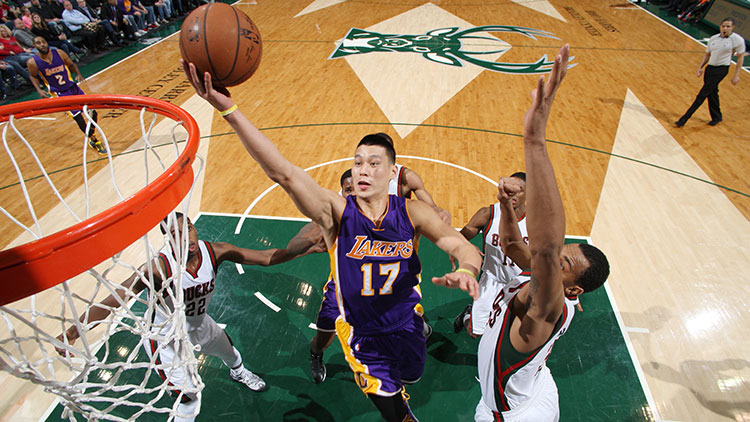 Danny Chau: On the night Linsanity turned three, Jeremy Lin got to relive a life it looked like he’d lost for good: He got to play for 30 minutes in a game for the first time in weeks. He got to play the hero again. But it’s been three years since he torched the Nets for 25 points, and being a hero these days, for the team he plays for, doesn’t mean what it used to.

For 35 games, the main attraction for Lakers fans was watching a living legend go through the worst shooting slump of his life. What’s down is up in Los Angeles. With Kobe Bryant out for the season, there is only one thing that gives this Lakers season any meaning. They have to protect their claim as one of the five worst teams in the NBA.1

Unfortunately, against the Milwaukee Bucks, the Lakers played with a menacing competence that threatened to put a W on the board. Lin had made some legitimately incredible passes in the final period, and even his two blown layups in the span of a minute were Kobe assists. With 36 seconds left in the fourth quarter, Lin drilled a 3 that put the Lakers up six. There was a near palpable dread that Lin, who has earned the ire of Lakers fans for his wildly inconsistent play this season, had found a way to screw up even this tank job. The Wolves, who own the worst record in the West, had just won against the Miami Whitesides. A loss would cover crucial ground.

His 3-pointer ended up being one of four consecutive 3s made in the span of the last 57 seconds — the other three were by Bucks players. The game went to overtime, where, with less than a minute remaining, Byron Scott’s drawn play out of the timeout was letting Lin dribble right into an off-balance 15-footer five seconds into the shot clock. It was maybe his worst miss of the night, one in which he shot 2-for-12 from the field. That was the dagger. Lakers lose. Wednesday was a night of remembrance. Lin was a hero once. And, dammit, for a night, he was going to be recognized as one again.

Play of the Year (of the Week)