In Praise of the NHL’s Negative Value Guy 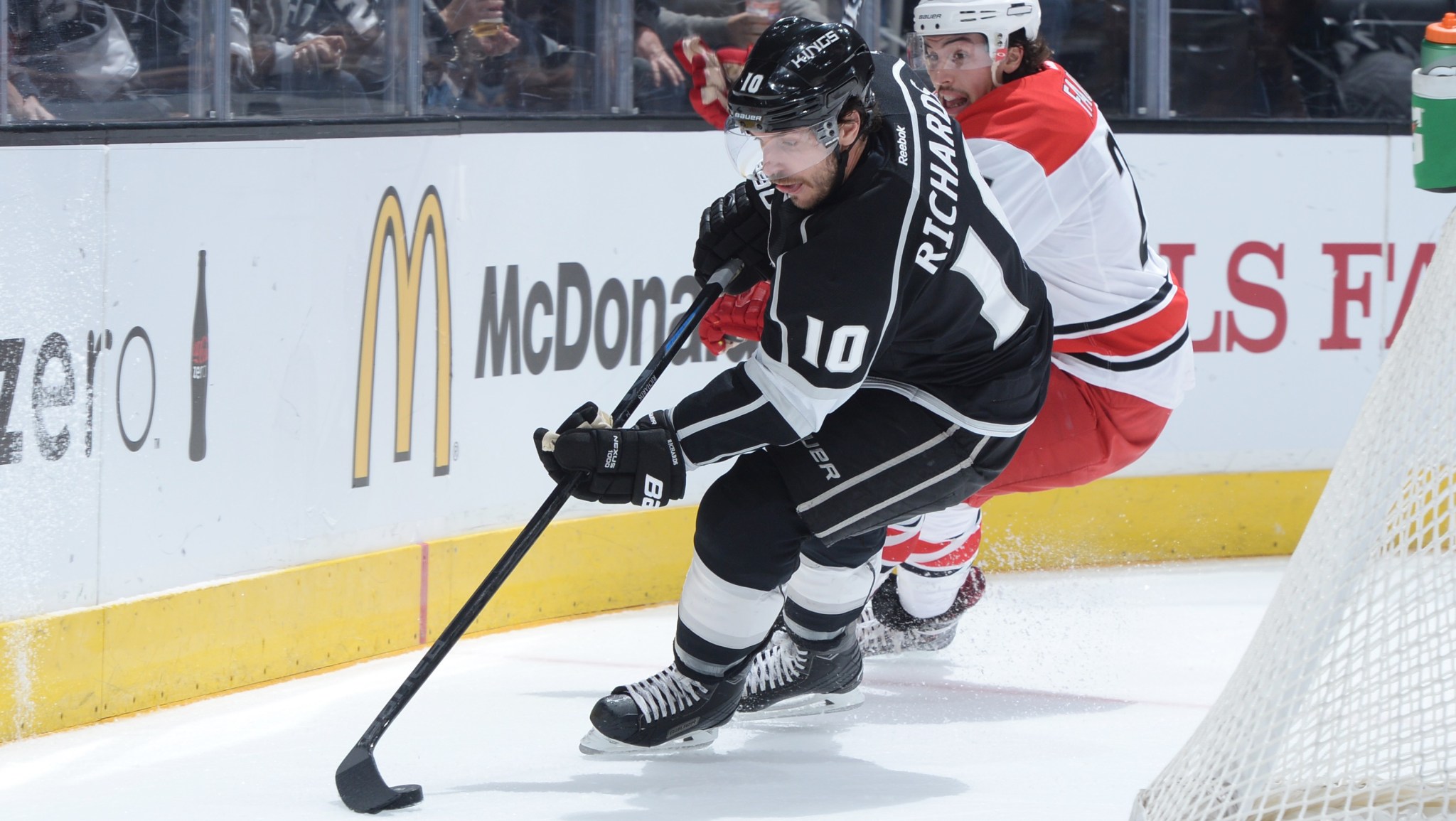 Or at least, he’s not a good asset, which these days is essentially the same thing. It’s no longer enough to judge players based on what they can do on the ice while letting the front-office accountants worry about who makes what and for how long. In a league that features a hard cap and guaranteed deals, a player’s value is inescapably tied to his contract.

None of what I just wrote is remotely controversial. On its own, it’s probably not even all that interesting. Every NHL fan understands this sort of thing on some level, and talk of contracts and cap hits permeates the discussion of any player. It’s why we all lost our minds when CapGeek went away — smart fans need this stuff to function. And it’s why we can have those fun arguments over whether you’d rather have Jonathan Toews and his monster contract or John Tavares and his bargain one.

But a funny thing happens when you start working your way down the list and follow this kind of thinking as far as it can go. As sports fans, we’re used to valuing players on a sliding scale from “really valuable” to “not valuable at all.” We’ll argue over who gets what label, of course, but the basic rules remain the same. A good player is worth a lot; a bad player is worth next to nothing; a truly terrible player may even be worth nothing at all.

Once a hard cap comes into play, things can get unintuitive. You start to realize that “no value” isn’t really the bottom of the scale after all. A player with an especially bad contract1 can’t really be said to be worth nothing, because that’s being too kind. He might actually be worth less than nothing. We’ve hit the floor and kept on digging, and down there we meet a relatively new specimen in the hockey world: the Negative Value Guy.

Again, this isn’t some sort of new concept — in other sports, fancy stats based on concepts like VORP (value over replacement player) and WAR (wins above replacement) have flagged players with negative value for years. But that’s based on what happens on the field, and those players tend to be rare, a type of outlier you rarely see sticking around for long. Hockey doesn’t have a widely accepted all-in-one value stat like that yet, but if it did we’d no doubt see the same thing: a handful of players kicking around the league who probably didn’t really belong based on their production.

I’d argue that once you start factoring in contracts and cap hits, we’re no longer talking about a handful of fringe players who dip ever so slightly into negative territory. There are lots of negative value guys, and you’ll find them on just about every NHL team. That’s because we’re no longer talking about a player’s value to his team in between whistles during a given game, but his value to his franchise as an asset.

Here’s one way to think of it: An NHL player is a negative value guy if he can be made available on the open market, at no cost, and nobody would want him. If that happened, we’d know that even “free” was too high a price to pay to acquire someone. That’s negative value.

And of course, that exact scenario plays out all the time. It’s called waivers, and it’s the way that NHL teams can make a player available to any other team in the league. Here he is, they say. If you want him, he’s all yours. You just have to assume his full contract.2

Sure enough, on most days during the season, a player or two hits the waiver wire. And in the vast majority of cases, the player clears. Those guys, at least temporarily, have negative value in the eyes of the free market. Around the league, 29 other teams take a look at a potential asset being offered up for free and say, “No thanks, you go ahead and keep him.”

A lot of those players are fringe NHLers whom fans have barely heard of. But bigger names occasionally go through the process, and we saw one example just two weeks ago, when the Los Angeles Kings waived center Mike Richards.

Richards is a reliable two-way player, one who’s won gold on the Canadian Olympic team and two Stanley Cups. He’s certainly not the player he once was — he scored 80 points as a 23-year-old in 2008-09, but his offensive numbers have been dropping steadily for five seasons. This year, he’d spent time on the Kings fourth line and was even a healthy scratch on some nights, so his days of making all-star teams appear over.  But on the verge of turning 30 and in his 10th NHL season, Richards is exactly the sort of battle-tested veteran with a winning pedigree over whom teams used to get into bidding wars. Even if his game isn’t what it once was, you’d think he belongs on an NHL roster.

And yet he cleared waivers. Richards may not be a bad player, but he comes with a terrible contract, one that carries a $5.75 million cap hit through 2020. That’s too much money and way too many years for a guy who contributes what Richards does. And in today’s NHL, that makes him a negative value guy.

He’s not alone. In addition to the many players who are waived each year, other negative value guys never hit the wire. Some can’t, because they have no-movement clauses that prevent them from being waived. But in other cases, teams don’t even bother, because the players still fill a role at the NHL level. They’re overpaid and unmovable, but teams are stuck with them, so they make the best of it.3

And that’s part of the point: Almost every team has guys like this. The negative value guy is no longer some sort of rarity. David Clarkson has negative value. So does Alexander Semin, and Vincent Lecavalier.4 Heck, for a long time it looked like Roberto Luongo had negative value, and he’s a Vezina contender. Negative value guys don’t all have the name recognition or résumé of a Mike Richards, but they’re on just about every roster around the league. Good NHL GMs occasionally have to gamble, and sometimes they lose. Having a few negative value guys in the lineup certainly isn’t a good thing, but it’s not the end of the world.

That takes an adjustment to hockey fan thinking, because it used to be that saying a guy was worth less than nothing was a mortal insult. Now it’s just a statement of fact, one that applies to a good chunk of the league. It sounds strange to say that a particular guy might be a useful NHL player while still carrying a negative value as an asset, but that’s where we wind up in a hard cap league.

And here’s the weird thing: While you may not be able to give a negative value guy away, that doesn’t mean you can’t trade him.

After all, teams can now retain salary in trades, and they can take back a bad contract or two in exchange. We used to ask how much it would take to land a certain player in a trade. Now, sometimes we end up asking how much it would be worth to get him off the books.

This has all created a weird new category of trades: the negative-for-negative deal. Would you rather have a guy with a bad deal for two more years, or a really bad deal for one more? Some GMs have figured this stuff out faster than others — Montreal’s Marc Bergevin has specialized in it, clearing long-term cap space with smart negative-for-negative deals in recent years. It’s another tool in a smart GM’s toolbox, and we’re seeing teams start to explore it. Mix in the siren song of “a change of scenery” fixing a broken player, and some of these deals start to look irresistible.

Once you can get past the negative-value stigma, this sort of stuff adds a fun new layer to trade rumors. The Kings tried to deal Richards before waiving him and couldn’t find a match, but that doesn’t mean they can’t revisit the idea over the next few weeks. How much salary would the Kings need to retain for Richards’s contract to start looking good to your favorite team? What kind of contract would they need to take back to make it happen?5

With a handful of exceptions in the cap’s earliest days, nobody has taken this to the logical extreme yet: the trade that sees a negative-value guy and a positive-value asset packaged together, with little or nothing at all coming back the other way. Forget the old-fashioned one-for-one deal — try to get your head around two-for-nothing.

Teams have already tried — the Flames reportedly offered to take Cam Ward off of Carolina’s hands if the Hurricanes included their first-round pick in the deal — but so far nobody has pulled the trigger. I think we’ll get there. And I think it will be great fun for hockey fans when these deals finally start happening.

So if your favorite NHL team has a negative value guy or two — and it probably does — don’t despair. It doesn’t mean what it used to mean. And it doesn’t even mean that you’re stuck with him, as long as your GM has the guts to get creative.

It’s time to embrace the negative value guy. He might be worth less than nothing, but he’s not alone, and he makes things fun. And that’s got to be worth something.