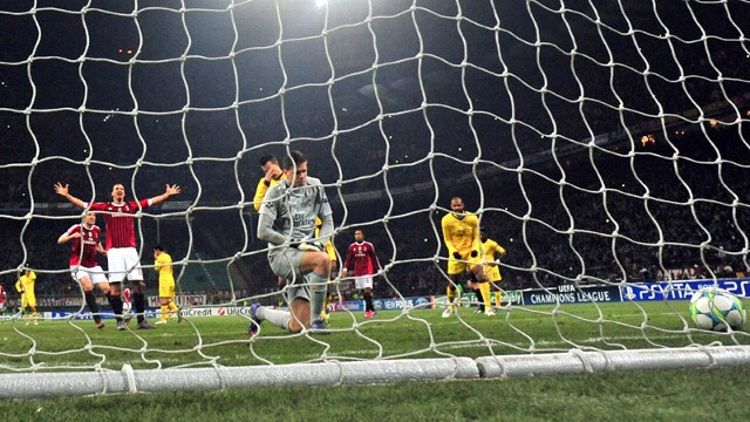 What’s the point of qualifying for Champions League, Arsene?

“I have always told you exactly the same, the priority is to be in the top four,” Arsenal manager Arsene Wenger said last month. He’s talking about finishing in one of the top four places at the top of the Premier League table, thus qualifying for Champions League. This “priority” has, in recent seasons, sometimes come at the expense of Wenger playing his strongest teams in much more feasibly winnable domestic competitions.

Why make the top four a priority? Well, it’s partly about money (being in the Champions League is a very lucrative opportunity) and it’s partly about stature (Arsenal are a big club and big clubs should play in Europe’s biggest cup competition). Regardless of the rationale, it seems like an increasingly joyless way to run your football club.

On Wednesday, A.C. Milan put 4 on Arsenal in the first leg of their tie at the San Siro. It might as well have been 12-0; the tie has been nuked from orbit, just to be sure. Yes, Arsenal have had some memorable European nights in recent seasons, but this Gunners side — as it is currently constructed — has next to no chance of winning the European Cup.

Wenger called the result a “disaster” and spoke ominously about the impact it would have on the rest of Arsenal’s Premier League season. But maybe not qualifying for Champions League would be a good thing for the club. Perhaps a season away from the competition, developing young talent away from the glare of the continent, and competing for the domestic trophies, would serve them well. One thing is for sure — this group of Arsenal players can’t suffer much more European heartbreak. At least this time, it wasn’t Barca that did the breaking.

How much will Messi’s shirt go for?

That’s because Barca was busy conducting one of its footballing clinics in Germany, beating Bayer Leverkusen, 3-1. Players for the German team weren’t just inferior to Barcelona, they were starstruck by them. Bayer manager Rudi Voller was less than impressed with two of his defenders, Michal Kadlec and Manuel Friedrich, who competed to see who could swap shirts with Lionel Messi at the end of the match. “I can guarantee that Kadlec and Friedrich will auction off their Messi shirts for a good cause,” the manager said. “What the pair did was a bit over the top.”

Was Zenit St. Petersburg-Benfica secretly the best tie of the week?

It was definitely the most exciting. Cold weather conditions, like those in northern Russia, usually produce cold football: lots of long, hoofed balls, sloppy dribbling, players wearing gloves and tights and snoods. But the “H was O” in St. Petersburg on Wednesday, as Zenit and Benfica played out a five-goal thriller. Zenit eventually won, 3-2, and the side’s equalizer, to make it 2-2, was one of the best team goals scored in the tournament this year.

Will Sir Alex Ferguson be satisfied?

Must have been a bit sad for Manchester United boss Sir Alex Ferguson to sit out the Champions League action on Tuesday and Wednesday. United have been a mainstay in the competition, winning the trophy in 1999 and 2008. This season United failed to advance to the knockout stage, dropping down into the less regal Europa League.

So is he wallowing in defeat? Come on, King Kong ain’t got shit on Fergie. The Scot has already thrown down the gauntlet for his side to win the Europa League trophy, while suggesting that the rest of Europe’s big boys are lucky to see United out of the Champions League. “I feel we had the ability to go all the way to the final,” he said. The only final they can go to now is for the Europa League in Romania. That will have to do.