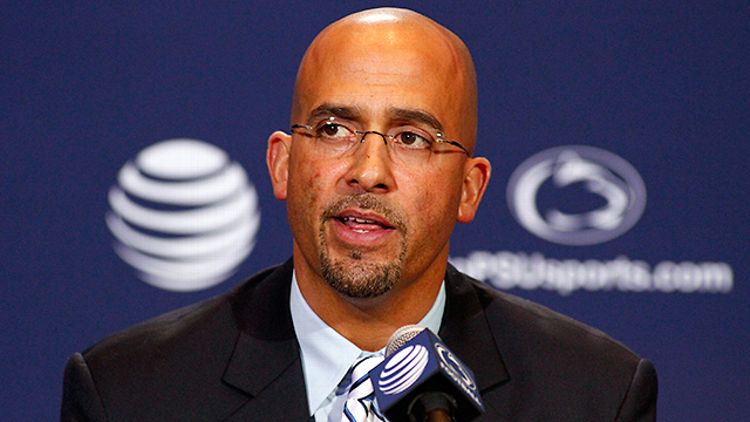 We’re not good at predictions. We keep telling y’all this, and then backing it up every time we make one. Seasons can turn on one freak injury, one breakout performance, or just one bad day, and trying to track the long-term viability of head coaching hires is even more fruitless than guessing how a game will go. As ever, there are too many moving parts to make anything more than a day care–educated guess about these things.

That said, we hope we’re not jinxing Penn State by pointing out that, from this far out, James Franklin looks like a home-run, slam-dunk, hole-in-one, why-aren’t-there-more-football-based-metaphors-for-this-situation hire to replace Bill O’Brien. That’s a curious thing to say about a guy who’s spent only three seasons as a head coach, but Franklin is walking into an unusual situation, and one with very specific needs.

Franklin is 41 years old, coming off his first head coaching gig, and taking over one of the nation’s most history-laden college football programs, but the Nittany Lions don’t simply need a good football coach. The next Penn State coach needs to be a keen recruiter who’s adept at Doing More With Less, as the program is scheduled to feel the ramifications of NCAA sanctions for years to come. But before that, he needs to be able to win the press conference, and be ready and willing to kiss all proffered rings and keep the booster set engaged. Who better to do that than the guy who was able to win games at Vandy, and whose personality has all but overshadowed the fact that we still haven’t seen the whole of his capabilities?

The next Penn State coach also, ideally, needs to arrive without an iota of scandal clinging to his boot heels; in this respect alone, Franklin seems a strange choice. No direct connections have been made between Franklin and the ongoing legal case of an alleged rape involving five now former Vanderbilt players, but it still came as something of a surprise that the Penn State administration would be willing to subject itself to the level of scrutiny associated with hiring a coach who draws sexual assault–related questions, however indirect, at his introductory press conference. (You can read the full text of Franklin’s answers regarding the case in Penn State’s transcript; PennLive also has a story up describing the vetting process.)

It may be awhile before we know what a True James Franklin Program looks like. He leaves Vanderbilt without having coached a team entirely composed of his own recruits, and the roster numbers to which he’d otherwise be entitled will be curbed at Penn State by the NCAA-enforced limitations. This actually may be a win for everybody, even in this respect. Franklin’s a young guy, and he may still be developing ideas about what he wants a True James Franklin Program to be.

He’ll get the time to figure that out, in his native state, on a stage big enough where filling a stadium isn’t a constant source of frustration; where his program has a high enough profile that he won’t have to needle Nick Saban for headline space; where he’ll get a one-of-a-kind marquee game against a BCS opponent to open the season; and where the school that let him get away becomes a division rival (first Maryland—Penn State game, so you don’t have to look: November 1, 2014, in State College).

More than even the Maryland game, though, the aspect of the new Penn State we’re most looking forward to has to be Franklin honing his latent talents for balloon-craft.

CJF says he won’t turn down a speaking engagement: “People ask us to blow up balloons in the backyard, we’ll do that as well.”

He’ll make you a dachshund, but never a giraffe. Neck too tall to be used just for feeding. Inefficient sleeping posture makes it a two-star prospect at best.