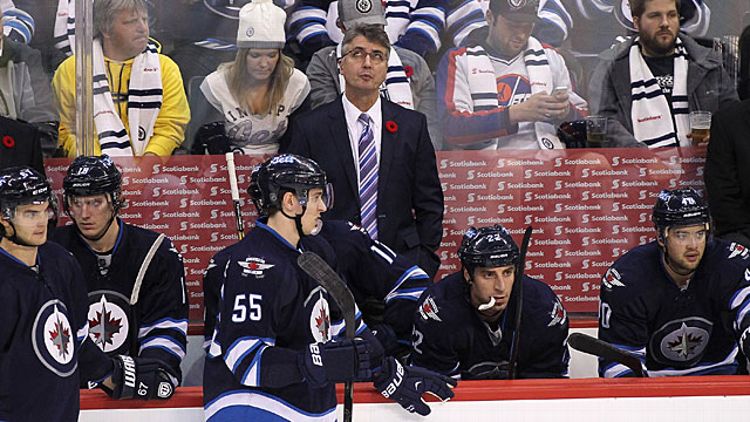 We didn’t have to wait long for the first firing of 2014, as the Jets announced Sunday that coach Claude Noel had been relieved of his duties and replaced by Paul Maurice.

It wasn’t especially hard to see this move coming; when even I’m getting predictions right, you know the writing was on the wall in great big letters. The Jets had yet to win in January, losing five straight while giving up 24 goals over that span, including Saturday’s 6-3 loss to the Blue Jackets. They missed the playoffs in each of Noel’s first two seasons, and have already been all but mathematically eliminated from this year’s race.

That’s made for a frustrating season in Winnipeg, and there have been signs that all the losing has been starting to wear on them. This is still a team that features some solid talent, including 22-year-old power forward Evander Kane, top pairing defenseman (sometimes) Dustin Byfuglien, leading scorer Bryan Little, gritty captain Andrew Ladd, and surprise U.S. Olympian Blake Wheeler. While none of those guys are exactly Hart Trophy threats, it’s a solid core made up of players that any team in the league would be happy to have.

So are the Jets really as bad as their record suggests? There’s some evidence that they may not be. The Jets were a terrible possession team in October, but have improved steadily since then and were actually playing reasonably well until the recent losing streak. They’re a top-10 team at generating shots, and the penalty kill has been good. And they’re one of the worst even-strength PDO teams in the league, which, at first glance, would seem to point to an eventual turnaround.

But that last stat may hold a bigger key, and it’s not good news for Jets fans. While a low PDO can be the result of a run of bad luck that should even out, it can also point to a different problem: lousy goaltending. And sure enough, the Jets’ team save percentage is barely north of 90 percent, which puts them in the same ballpark as goaltending wastelands like the Oilers and Islanders.

Most of that sits on the shoulders of starter Ondrej Pavelec, whose .898 save percentage ranks 42nd out of 47 qualifiers. And while that number is below his career average, it’s not exactly an outlier: He’s had only one season in his career that was better than .910. Since Pavelec became a regular starter in 2009, 29 goalies have played at least 150 games — and he ranks 28th.

So while Noel didn’t want to blame his goalie for the team’s woes, I don’t mind doing it for him. Pavelec certainly isn’t the entire problem, but he’s a big piece of it, and the franchise is stuck with him. Despite his uninspiring numbers, the Jets saw fit to give him a five-year extension before last season that runs through 2017.

The good news: Maurice is a veteran coach. And he certainly knows a thing or two about bad goaltending, having been the guy who coached the Maple Leafs during the Raycroft-Toskala era. He’ll make his debut behind the Winnipeg bench tonight, as the Jets host the Coyotes.

If the Jets wants to look for quick-turnaround inspiration, they can find it at the top of the standings. Less than two years removed from finishing dead last in the Pacific, the Anaheim Ducks are pulling away from the rest of the league.

The Ducks have won seven straight, which is already their third seven-game win streak of the season. They’re 19-0-2 at home, and have won 17 of their last 18. At 75 points on the year, they’ve opened up a 13-point lead on the Sharks in the Pacific and are now five up on the Blackhawks in the race for the Presidents’ Trophy.

The latest win came Sunday night, when they outlasted the Red Wings in a hard-fought 1-0 contest. It was an off night for the team’s big guns, but it didn’t matter — Jonas Hiller made 22 saves for the shutout, and Andrew Cogliano’s second-period goal held up as the winner. Another night, a different player stepping up, another win. Ho hum.

Ryan Getzlaf is getting some midseason MVP love. Corey Perry is second in the league is goals. Goalie Hiller is riding the kind of win streak that we haven’t seen in almost two decades. Dustin Penner may be one of the best free-agent signings of the offseason. And we haven’t even mentioned Nick Bonino or Cam Fowler or Teemu Selanne or … you get the point. They’re good.

How good? Well, this is an Anaheim Ducks post, so here comes the inevitable caveat about sky-high PDO and unsustainable shooting percentage and regression to the mean. If that all sounds familiar, it’s because we were saying essentially the same things last year, too. The Ducks are one of those teams whose underlying numbers say they shouldn’t be as good as they are. Sometimes that sort of thing comes back to bite you. But it hasn’t happened in Anaheim yet, and even if it did, the Ducks have banked enough points to all but be assured of home ice in the first round.

That seems like the worst-case scenario at this point. As for the best-case … well, let’s just say Ducks fans are already familiar with it.

It’s hard not to like the Dallas Stars. If you’re into the fancy stats, they rank as one of the league’s 10 best teams. If you’re a fan of old-school narratives, they’re a nice little rebuild story, radically re-creating the team under a new coach and GM. And if you prefer to just sit back and enjoy the games, they’re a heck of a fun team to watch, ranking among the top teams for both goals scored and goals given up. Even those new uniforms look sharp.

In fact, just about the only place where the Dallas Stars don’t seem to be appreciated is the only one that really matters: the standings. Thanks to a six-game losing streak, they’ve fallen to 10th in the Western Conference, eight points back of the last wild-card spot.

The most recent loss came Sunday night, as they dropped a 4-2 home ice decision to the Islanders. It was a game that the Stars led 2-1 with five minutes to play, only to see Kyle Okposo tie it at 15:44 of the third. John Tavares scored the winner almost three minutes later, and Brock Nelson added an empty-netter. Dan Ellis took the loss, outdueled by Kevin Poulin.

For the Stars, it was yet another step back in a disappointing season for a team that’s featured some strong individual performances. Team captain Jamie Benn has been excellent, earning a spot on Team Canada despite being left off the summer’s orientation camp roster. Teenage rookie Valeri Nichushkin has been a revelation, earning a somewhat controversial Olympic nod of his own. And Tyler Seguin has been among the league leaders in points per game, making the offseason blockbuster that brought him over from Boston seem like a major steal for rookie Dallas GM Jim Nill.

And yet the team as a whole continues to struggle, largely as the result of defensive lapses. Goalie Kari Lehtonen has been about what you’d expect — his numbers this year are virtually identical to the ones he posted last season — but that hasn’t been enough to bail out a leaky team defense. Some of that is due to the loss of defenseman Stephane Robidas, who broke his leg in November, and some is just the inevitable struggles of a young team learning a new coach’s system. But they’ll need to find a way to improve if they want to claw their way back in the race, since, at this point, it looks like there’s only one team — the Wild — that they have any hope of catching.

They’ll get a chance to gain some ground this week. After hosting Edmonton and Boston for a pair of midweek contests, they travel to Minnesota for a key Saturday-night showdown.

• That Islanders win in Dallas was the team’s fourth straight, and seventh straight on the road. They’ve climbed back to the fringes of the playoff race, seven back of the last wild-card spot, though they’d need to pass six teams to get there.

• The Oilers faced a pair of tough weekend games against the Penguins and Blackhawks and earned a split, beating Pittsburgh on Friday and then losing to Chicago on Sunday night, despite “scoring” this comical goal. Meanwhile, GM Craig MacTavish outlined his vision for the team in an extensive interview that’s well worth a read.

• The Canucks earned a tough win Friday, getting 30 saves from Eddie Lack to beat St. Louis 2-1 and snap the Blues’ seven-game winning streak. The schedule doesn’t get any easier this week, as they’ll head out onto the road to face the Kings and Ducks.

• The Senators earned a shootout win over the Predators to move within two points of a wild-card spot. They’ve earned points in six straight.

• The Penguins are running away with the Metro, but the battle for the division’s other playoff spots is shaping up as a fun one. The Caps, Flyers, and Rangers are all jostling for second and third spot, with the Devils and Hurricanes right in the mix too. And don’t look now, but for the first time in months a Metro team is also holding a wild-card spot.

• The Canadiens got a pair of goals from Andrei Markov, including the OT winner, in a 2-1 home win over the Blackhawks. That continued a lose-one, win-one pattern that they’ve been following for their last six. That’s been good enough to keep them in the mix for first in the Atlantic, where they’re currently three back of the Bruins.

• Speaking of Boston, they handed the Sharks a rare home loss Saturday when Tuukka Rask outdueled fellow Finnish Olympian Antti Niemi in a 1-0 Bruins win. That kept the Bruins two up on the Lightning for the division lead.

• The Sabres gave new GM Tim Murray the first win of his tenure, beating the Capitals 2-1 in a shootout Saturday. It was Buffalo’s first road win in more than two months.

• And finally: No, we’re not doing a section on the Maple Leafs this week, either because I can’t bring myself to talk about it, or because I’m going to write an 18,000-word column about this whole mess sometime soon that will be submitted in all caps and make frequent use of the blink HTML tag. Besides, the Leafs won Sunday night … in a shootout, despite getting out-shot by a wide margin, against a bad team that played the night before. They won! That means they’re good again, right?