What Alex Rodriguez’s 162-Game Suspension Means for the Yankees, His Future, and More 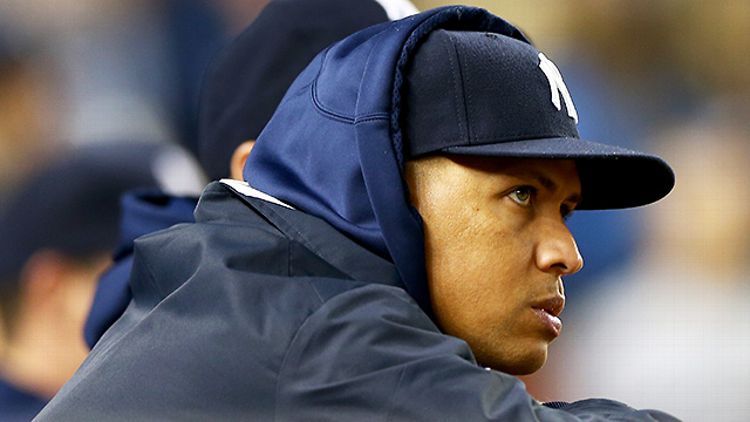 Alex Rodriguez dominated the weekend headlines, seeing his suspension reduced from 211 games to 162 on Saturday, then serving as Anthony Bosch’s human punching bag on Sunday’s 60 Minutes.

Let’s focus on what happened Saturday, because while independent arbitrator Fredric Horowitz “reduced” the ban, he still upheld the longest suspension in MLB history for performance-enhancing drug use.

The ruling carries far-reaching effects for several parties, including MLB, Rodriguez, and the Major League Baseball Players Association. Still, with Rodriguez’s case likely resolved, the New York Yankees become the most affected party. Let’s examine some of the repercussions for the Yanks and everyone else.

Can the Yankees Now Afford to Go Get Masahiro Tanaka?

It’s fine to discuss the weighty stuff about PEDs, namely the future of cheating and punishment in baseball, but right now, this is the big question. It’s been two years to the day since ESPN’s Jayson Stark published this terrific primer explaining the gigantic financial rewards the Yankees stood to reap if they could duck under the $189 million luxury tax threshold in 2014: $40 million on the conservative side, and potentially more. Horowitz’s slightly convoluted ruling held that the Yankees would recoup 162 days worth of A-Rod’s 2014 salary, but not a whole season’s (183 days) worth. That’s $22.13 million saved, with Rodriguez keeping $2.66 million in salary, plus a $3 million bonus. Rodriguez was scheduled to count $27.5 million against the Yankees’ payroll this season, based on the average annual value of his 10-year, $275 million contract. That means the Yankees will save $24.34 million against the luxury tax limit in 2014.

So can the Yankees take that extra $24 million and land Japanese pitching phenom Masahiro Tanaka while still staying under the $189 million cap? Unlikely.

According to Yahoo’s Jeff Passan, who polled Yankees execs before A-Rod’s suspension, New York would have been on the hook for about $178 million in luxury tax commitments if A-Rod’s entire luxury tax number got refunded for 2014. Others have floated a figure closer to $183 million. Add the $2.66 million in luxury tax relief that the Yankees did not get as a result of Horowitz’s ruling, and, depending on which projection you buy, the likely luxury tax number nets out just under $181 million or just under $186 million. Either way, that would leave no way for the Yankees to get Tanaka at the expected market price and still sneak under $189 million.

Here’s the other problem: Aside from pitching, the Yankees have two gigantic infield holes to fill with A-Rod out and Robinson Cano now in Seattle. The team has made some under-the-radar moves to try to address this, adding former Ray Kelly Johnson and longtime Oriole Brian Roberts to the major league roster, and signing once-promising A’s and Tigers prospect Scott Sizemore to a minor league deal. The Yankees can hope that Johnson’s lefty power plays well with the short porch in the Bronx, that Roberts somehow fights off years of injuries as he approaches his late-30s, and that Sizemore (still only 29) taps into the offensive potential that saw him post a .342 on-base percentage with 11 homers in 110 games three years ago, but none of these players are championship-quality talents. Even with the additions of Brian McCann, Carlos Beltran, and Jacoby Ellsbury this offseason, the Yankees probably can’t afford to start subpar players at second and third while also carrying a potentially over-the-hill Derek Jeter and an aging Mark Teixeira; right now, the Yankees have one of the worst projected infields in the league.

Even if the Yankees didn’t have to worry about filling other holes, they wouldn’t have enough money to stay below the $189 million cap while landing the services of a 25-year-old pitcher who’s the most sought-after commodity left on the market by a mile. If they do make moves to beef up the infield — whether by adding Mark Reynolds, Michael Young, or someone else — landing Tanaka while staying below the cap would become impossible.

The alternative is for the Yankees to instead sign Ervin Santana or Ubaldo Jimenez to a multiyear deal. Neither pitcher will come cheap, but the supposed price tags could get depressed enough by the attached draft-pick compensation to allow the Yankees to add one of them plus another infielder while still spending less than $189 million.

Even then, the Yankees would probably need some magnanimous team to take, say, Ichiro and his $6.5 million 2014 luxury tax off the books to allow the Yankees to add quality pitching help other than Tanaka. Not impossible, but still a tough proposition.

Should the Yankees Even Bother Trying to Spend Less Than $189 Million?

It’s easy to argue against it. According to the Wall Street Journal’s Brian Costa, the Yanks lost nearly $60 million in ticket revenue alone in 2013. It turns out fans don’t have much interest in watching half-decent, very old, kind of dull teams play for 81 games, even if those teams wear pinstripes. Though adding McCann, Beltran, and Ellsbury figures to help the Yankees a lot, the team lost one of the five best players in the league in Cano. There are questions about CC Sabathia and the previously reliable Hiroki Kuroda following a shaky second half last year — and those are the Yankees’ top two projected starters right now. And of course, there’s the always fierce competition in the AL East. The Red Sox are the defending world champions; the always tough Rays could be better this year with a full season of Wil Myers and some organic improvement for talented young pitchers like Chris Archer, Matt Moore, and Alex Cobb; the Orioles are coming off an 85-win season that tied them with the Yankees; and the Jays probably won’t be that bad again in 2014.

The Yankees have never been shy about spending big, and now might not be the time to start. Maybe the team should stop getting so cute with the luxury tax, embrace the nine-figure profits it’ll make every year thanks to its wildly lucrative relationship with the YES Network, and build a team that will get fans excited again and contend for an AL East crown. If that means paying Tanaka $100 million or more, OK. And if the Yankees don’t want to rely on either David Phelps or Michael Pineda (who hasn’t pitched in the majors since 2011) to make 30 starts, maybe they should sign Santana, Jimenez, or Matt Garza as well and turn a suspect rotation into what would instantly become one of the AL’s deepest.

Right now, embracing their Evil Empire, spend-like-the-sun’s-about-to-explode roots might be the best path for the Yankees.

Is There Any Chance the Yankees Will Have to Pay A-Rod in 2014 After All?

Not likely. Horowitz’s ruling was frustrating because it didn’t make public exactly what the findings were in this case, other than MLB’s nebulous charges of obstruction, along with direct PED-related violation(s). Rodriguez’s attorneys said they intend to appeal the ruling in federal court. That route will probably prove fruitless, however, for reasons that FanGraphs’ Wendy Thurm explained in her excellent recap of the A-Rod saga:

Horowitz’s decision is final and binding under the terms of the CBA and JDA. Collective bargaining agreements are governed by the federal law known as the Labor Management Relations Act. Under that statute, judicial review of an arbitrator’s decision is very limited. Courts are not authorized to review an arbitrator’s decision on the merits, even if one of the parties argues that the arbitrator made factual errors or misinterpreted the CBA. A court may intervene only when the arbitrator strays so far from his authority that he “dispenses his own brand of justice,” as the Supreme Court wrote in a recent opinion.

What Kind of Precedent Does This Set for MLB?

The Joint Drug Agreement states that PED suspensions should be carried out as followed: 50 games for a first offense, 100 for a second, and a lifetime ban for a third. So in suspending A-Rod for 162 games, the league has chosen a number that isn’t codified in any collectively bargained document. Then again, this isn’t the first time the commissioner’s office has made up new rules on the fly. It happened six months ago when Ryan Braun got suspended for 65 games after being linked to the same Biogenesis investigation that nabbed A-Rod. The league has claimed there were extenuating circumstances in both cases, with Braun lying about his PED use and Rodriguez allegedly attempting to buy evidence from Bosch, head of the now defunct Biogenesis clinic. (Never mind that MLB paid off Bosch in the end, and also promised to help shield him from the charges that awaited him in the scandal.)

But rules are rules, and right now there don’t seem to be any firm ones for baseball’s drug offenders. While the JDA’s three-strike structure is supposed to govern future decisions, the reality is that MLB has now established a precedent that could enable the league to levy whatever penalties it wants on players, depending on how bad it considers the offenses.

Bud Selig and his eventual successor seem to have unlimited power to go after whomever they want, in whatever manner they see fit.

What About MLBPA’s Role in All of This?

There are two ways to categorize the union’s actions, or lack thereof, in the A-Rod and Braun cases. You could say that Rodriguez and Braun were so clearly guilty of both PED use and various forms of bad behavior that even their union refused to put up a fight (Braun eventually acquiesced to MLB’s suspension, while A-Rod has obviously not). Or you could argue that the players’ association has been derelict in its duty, and that this is just the latest example of a union that’s been pushed around by the league, and now lacks clear leadership following Michael Weiner’s death in 2013.

The question now is whether the union will push back, forging the possibility of labor strife in 2016. As Ken Rosenthal of Fox Sports wrote:

The owners could try to take advantage if the players show increased flexibility on drug testing. Management also has negotiated restrictions on domestic and international amateurs and a cap on the posting fees for Japanese players, and no doubt is eyeing the final frontier — major league salaries.

That last part is the scariest, but also arguably the silliest. In 2003, player salaries ate up 62 percent of MLB’s total revenue; by 2012, that figure had plunged to just 42 percent. There’s nothing necessarily nefarious at play, and skyrocketing TV contracts are the main culprit. Still, that 58-42 split is already the most owner-friendly among any of the four major American team sports. If the owners try to add to the money they’ve taken out of domestic and international amateurs’ pockets, and to the power they’ve yanked from the union on drug matters, then the players’ association would have every right to fight back.

So, Will A-Rod Play Again?

He wants to, even vowing to report to spring training in just over a month’s time. But delusions aside, Rodriguez isn’t going to play this year, he probably isn’t going to play for the Yankees again, and right now the smart money’s against any other team signing him after that. New York owes Rodriguez a total of $61 million for the 2015, 2016, and 2017 seasons. While it’s conceivable that A-Rod might have something left in the tank when he returns from his suspension, he’ll turn 40 in 2015, and injuries have already begun ravaging his body and limiting his playing time. Barry Bonds hit .276/.480/.565 in 126 games for San Francisco in 2007, then never played again. A-Rod’s not nearly that good at this stage of his career, and he’s probably a bigger PR problem (real or perceived) now than Bonds was then.