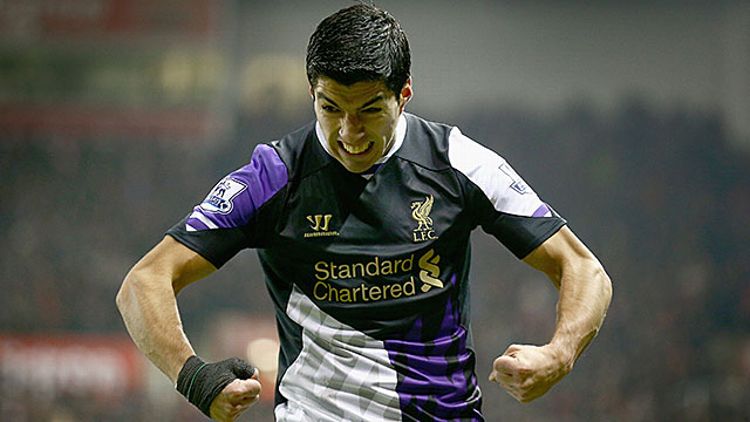 Winners and Losers from Stoke-Liverpool, the Craziest Match of the Year

Brett Koremenos: Stoke fans. Tony Pulis advocates (if there is such a group) will point out that his much-decried methods produced a long, comfortable stay in the top flight for Stoke, but such “success” came at the cost of aesthetically pleasing football. The tension created by small margins — the typical result of Pulis’s conservative, defense-first approach — versus the euphoria found in an exciting, free-flowing match like yesterday are two distinct experiences derived from watching the sport. After years of brutal, unwatchable results, Stoke supporters finally got a chance to see the difference.

Liverpool probably don’t have a tight enough back four to hold up under the pressure that comes with playing only two in the middle (see Stoke lighting them up with goals), but HOLY CRAP is it fun to watch them play with two strikers.

Ryan: Brendan Rodgers had this reaction to Sturridge’s goal (via 101GreatGoals) …

… and then he called Raheem Sterling’s possible dive/definitely controversial fall in the box “a Spanish penalty.” Rodgers is notorious for making up new phrases and inventing new positions for players (inverted false nine) to make himself sound like the Stephen Hawking of football management. He’s just a dude in a suit, standing on the sideline. But he is unintentionally hilarious. Spanish penalty!

Koremenos: Charlie Adam. Joining Liverpool in the summer of 2011 as part of Kenny Dalglish’s ill-conceived “buy British” Liverpool overhaul, Adam lasted just one season. When new manager Brendan Rodgers came in, he made it clear that the immensely disappointing midfielder had no future in his side. It’s probably an understatement to say Adam found extra enjoyment from his superb strike in the 45th minute yesterday finding the back of the net.

LOSERS
Mike L. Goodman: Steven Gerrard. Yes, he scored a penalty, but he was also the deepest midfielder in a Liverpool trio that was incredibly ineffective after having been quite strong in his absence. If you were wondering how Charlie Adam got the time and space to launch his left-footed rocket for Stoke’s second goal, it’s because Gerrard decided that it would be a good idea to run to his right and fall down. Way to go, Steve!

Koremenos: Jack Butland. An own goal, nightmarish defending, a penalty kick from Steven Gerrard, the return of Daniel Sturridge, and lots of Luis Suarez. Butland won’t have many fond memories of his first Premier League start.

Cheik Tiote and the Goal That Wasn’t

Goodman: You wouldn’t know it from Sunday, but Cheik Tiote is actually really, really bad at kicking a football when attempting to score a goal (don’t feel bad; given the frequency with which he tries it, Tiote is equally in the dark). So it’s especially ironic that he was the player that launched the fine effort at Newcastle that sparked the offside debate heard round the weekend when it was disallowed.

Arguing over rules minutiae is just about the least fun thing ever (it’s so not fun, in fact, that everybody on Twitter seems to do it all the time), but in the aftermath of Newcastle-City, it’s worth taking a minute to acknowledge exactly how muddled the FIFA rule book gets in this situation. As briefly as possible, being flagged for offside entails two things: first (obviously), being in an offside position, second (incredibly confusingly), interfering with a play or an opponent.

In fact, the definition of interfering with an opponent was so vague that FIFA updated it last summer. Now the relevant part of the rule reads as follows:

“[I]nterfering with an opponent” means preventing an opponent from playing or being able to play the ball by clearly obstructing the opponent’s line of vision or movement or challenging an opponent for the ball.

This left Mike Jones having to very quickly decide two things on Sunday. First, did any of the offside Newcastle players (and there were at least three) CLEARLY obstruct Joe Hart’s vision? And second, if they did, did that prevent Hart from being able to play the ball? The answer to both questions is no. Probably. But that’s after a day’s worth of viewing and pondering. In real time I have no idea how a referee is supposed to accurately judge both parts of that rule. It’s another one of those situations where FIFA makes the referees’ job as hard as possible.

But hey, everybody talks about it, the aggrieved fan base blames the referee, and nobody really bothers to ask whether the rules make any sense. FIFA wins, referees lose, and Newcastle really lose. Not only do they not get the call on the goal, but Tiote gets some positive reinforcement, which he desperately doesn’t need, for continuing to take potshots that end up in Row Z.

Koremenos: Facing off against a Swansea side looking to dominate possession, David Moyes paired Adnan Januzaj up top with with striker Danny Welbeck. Meanwhile, the club’s most creative player, Shinji Kagawa, started out wide on the left. The idea was for Welbeck and Januzaj to press high up the pitch and disrupt Swansea’s ability to control the ball while Kagawa would drift centrally when United had possession.

But if we have learned anything from Kagawa’s time at United, it’s that his wide play is less than inspiring. In the first half, Kagawa spent a lot of time tracking back on defense instead of creating from the center of the park, and United’s attack seemed disjointed. Especially in his system, it’s a no-brainer — regardless of opponent — for Moyes to employ Kagawa centrally if he is going to maximize his impact.

Thankfully for United fans, Moyes came to his senses during the break and swapped Januzaj and Kagawa in the second half. A more settled Kagawa produced chances both for himself (he was denied a goal by Leon Britton’s outstanding defensive effort) and others (Chris Smalling blew an assist by missing a sitter), while generally looking like the player United thought they had acquired two summers ago.

O’Hanlon: Over the weekend, Adam Johnson netted a hat trick in a massively important Premier League game in London for a team traveling down from the north.

Had I read that sentence to you a week ago, you would’ve said, “Wait, I thought he wrote about North Korea. He plays soccer?” Had I corrected you and said, “No, the English Adam Johnson,” you would’ve laughed and said, “Yeah, the first scenario was more believable.” Had I read that sentence to you, I don’t know, three years ago, you might’ve nodded your head and been like, “Whoa, he doesn’t typically score that many goals, but OK!” Had I corrected you and said, “Well, he was playing for Sunderland against Fulham, and both teams are in danger of being relegated,” you, considering your familiarity with Pulitzer fiction winners, would’ve compared it to a moderately sad story line from A Visit From the Goon Squad.

It’s not surprising that Johnson doesn’t play for Manchester City anymore, as young players get overpriced and overvalued, especially the English ones who don’t have a move beyond “cut back to my left foot.” What’s surprising is — bear with me here — that it is already surprising that Adam Johnson played a good game while on a bad team. Players wash out from big teams all the time. But Johnson played 26 Premier League games for City, two years ago, when they won the title. Now he’s not even the first choice for a team with 17 points through 21 games. (Before Saturday, he hadn’t played a full match since before Thanksgiving.) He skipped the “be a good player on a decent team for a season, then maybe try something overseas, and then come back and hang around the bottom of the league for a few years” part of the story. Although, Johnson now leads Sunderland in goals, assists, and key passes per game, but that might say more about the team than the player.

“In the last few weeks and months I felt like the door [to the World Cup] was almost closed on me but now I think if I keep playing like this you never know,” Johnson said after the game. “I might make a late shout for the plane.” He went on, after being asked about Theo Walcott’s recent injury: “I was gutted for him, but if you can gain off someone else’s misfortune, you have got to try and take it.”

Sorry, I’m all out of literary jokes.