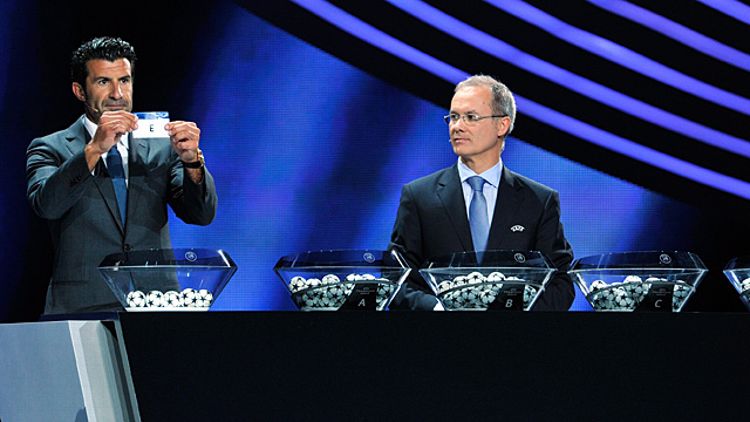 It was a banner year for Groups of Death in 2012. Both Euro 2012’s Group B, featuring Holland, Germany, Denmark, and Portugal, and the UEFA Champions League’s Group D, featuring Real Madrid, Manchester City, Ajax, and Borussia Dortmund, had the deepest and strongest talent pool in their respective tournaments. That Group D was a particular historical anomaly, as it featured an unprecedented four domestic champions, three which represented the top three leagues in Europe. The two teams that emerged from Group D, Borussia Dortmund and Real Madrid, both reached the semifinals.

There is no group in this year’s draw that compares to last year’s Group D. But there are a few that look deeper and stronger than the rest, so let’s see if we can’t find ourselves a worthy group to call this year’s Group of Death.

The Group That Would Be the Group of Death

On first glance, Group F looks like the most competitive group in the tournament. For the Champions League, UEFA draws teams from four pots to create the seeding system for the tournament. Pot 1 has the teams with the strongest historical record in continental play, while Pot 4 has the teams with the weakest records. UEFA ranks teams using a relatively crude metric, which leads to the imbalances between groups.

Serie A runner-up Napoli was the strongest side in Pot 4 of the draw, meaning that when it drew into Group F, it was destined to be among the most challenging. That it drew alongside Dortmund, the strongest side in Pot 3, only densified the talent level in Group F. The Pot 1 team in the group, Arsenal, has advanced out of the group stages of this tournament for 10 consecutive years. Finally, the Pot 2 team, Olympique de Marseille, placed a solid second in Ligue 1 last season and has an illustrious history of continental success.

However the perception of strength in Group F slightly outweighs the talent within it. Arsenal was one of the two weakest sides to emerge from Pot 1. While the North London club can field a strong starting lineup, its lack of first-team depth will make playing in multiple competitions a challenge. And while another team might choose to run out a reserve side in the domestic cup competitions, Arsenal’s extended trophy drought means manager Arsene Wenger will be hard-pressed to sacrifice what is supposed to be a relatively easy path to silverware.

Could Arsenal get out of this group? The team matches up well with group favorite Borussia Dortmund, but this is not an Arsenal side that can be penciled in for a deep Champions League run.

Marseille, like Arsenal, is a club with a stronger history than present. Marseille’s presence in Pot 2 is largely based on its success two seasons ago when, placed in a very similar group to this one, it knocked off Borussia Dortmund to emerge from group play alongside Arsenal. Marseille then surprised a reeling Inter Milan in the first knockout round. That was not a great Marseille team, and this team is not even that good. Much like Arsenal, Marseille currently lacks depth, and with a second superclub joining the French top division in Monaco, Marseille may have to prioritize its domestic campaign over its European one. A more sophisticated club ranking metric developed by Infostrada Sports ranked Marseille the second-weakest team in Pots 1-3. While Marseille doesn’t seem like cannon fodder, this year it is despite it’s history and reputation.

What makes Group F a Group of Death candidate is the strength of its Pot 3 and 4 teams. Napoli is a rebuilt side, and has looked strong in Serie A under new manager Rafa Benitez. Though Paris Saint-Germain poached top scorer Edinson Cavani from the Italians, the savvy additions of former Real Madrid players Gonzalo Higuain, Raul Albiol, and Jose Callejon have strengthened the team, and Benitez’s history in the Champions League features consistent overachieving. That said, Benetez’s new-look Napoli has yet to face elite competition.

In this group, only Borussia Dortmund (whose fans can be seen above getting in the Champions League spirit at a match against Malaga last season) seems capable of winning the tournament. Dortmund remains a great team, even after losing Mario Goetze to Bayern Munich. Jurgen Klopp has reloaded his midfield for the third consecutive year, this time promoting Marvin Ducksch and Jonas Hofmann from the team’s academy, and adding Henrikh Mkhitaryan from Shakhtar Donetsk. Dortmund will be a heavy favorite to advance out of this group, with Arsenal and Napoli fighting for that second spot. Is this our Group of Death though? I’m not sure. Neither the elimination of Arsenal nor Napoli will represent the elimination of a potential tournament finalist, and Marseille is a pretty weak fourth team for a Group of Death. Let’s dig deeper.

Groups B, D, and H all have a pair of marquee names headlining their draw, but only one of those groups is deep enough to be considered a potential Group of Death. Group H has Barcelona, Milan, Ajax, and Celtic, which would have been the Group of Death for much of the latter half of the 20th century. This year, though, Milan is the third-best team in Italy, Celtic almost lost to the champions of Kazakhstan, and Ajax seems doomed to become a feeder club to the elite teams of Europe.

Group B features two titans in Real Madrid and Juventus, along with a third quality club in Turkish champions Galatasaray. However, its Group of Death bona fides suffer when one looks at FC Copenhagen, which is one of the two weakest teams remaining in the tournament. As Andrew Downie of the Christian Science Monitor said when discussing potential Groups of Death during the 2010 World Cup, “No self-respecting Group of Death would be caught dead with North Korea in it.” Copenhagen is a little too North Korea for Group B to qualify as anything other than a tough draw for Galatasaray.

That leaves us with Group D, featuring Bayern Munich, Manchester City, CSKA Moscow and Viktoria Plzen. Put another way, Group D has the reigning European champion, a Premier League title contender, the reigning Russian champion, and the reigning Czech champion, which, using Infostrada’s metrics, was the second-strongest team in Pot 4 behind only Napoli. Bayern Munich is the tournament favorite, having upgraded its squad after winning last year’s trophy. The only stumbling block for a Bayern repeat, funny enough, is the addition of manager Pep Guardiola. As Guardiola moves the German champions from a 4-2-3-1 to a 4-1-4-1 similar to what he ran at Barcelona, there have been some growing pains. Manchester City, despite its lackluster performances in the past two tournaments, is capable of winning the tournament. CSKA was excellent last season, while Viktoria Plzen defeated Napoli in the previous Europa League, and won its second title in an underrated Czech league last year.

Currently, Group D is our Group of Death clubhouse leader, but it is still an unconvincing Group of Death. Not only does a Group of Death need to be bereft of also-rans, it also needs to necessarily eliminate a contender for a deep run in the tournament. And while CSKA is good, it isn’t Champions League semifinal good. So let’s look in one more place.

If we’re going to spend this much time weighing what may or may not constitute a Group of Death, we might as well stop for a second and face the macabre reality of how one might die. One could perish naturally, peacefully, having reached old age, surrounded by loved ones at the Amsterdam Arena against Barcelona. One might soar like Icarus too close to the sun (or Bayern Munich) and fall calamitously back to Earth, before dying from trauma related to impact. One could suffer an honorable death, fighting bravely on a battlefield, perhaps down to 10 or even nine men, destined to be remembered with honor around the great tables of Valhalla. Or there’s poison; a man can always be brought down in his prime without warning.

So, I would like to submit one final group for Group of Death consideration: Group A, featuring Manchester United, Real Sociedad, Shakhtar Donetsk, and Bayer Leverkusen. Despite having only one marquee name (Manchester United), this group is as strong and deep as any other group in the tournament. Real Sociedad had to hold off Valencia last season to qualify for the Champions League, and just dominated a solid Lyon team to qualify for the group stages. While it’s easy to think of La Liga as a duopoly, there is quality talent throughout the upper half of the table. Ukrainian champions Shakhtar Donetsk made a run into last season’s knockout stages, and while it lost top scorer Mkhitaryan to Dortmund, it added Brazilian winger Bernard, who was deeply coveted by the likes of Arsenal because he can do things like this:

Shakhtar is an elite team capable of making another run into the knockout stages. German third-place finishers Bayer Leverkusen has opened the Bundesliga season by continuing a stellar run of form that saw the German side go unbeaten in its final eight matches of last year. This was the only team to knock off Munich in league play last year, and by all indications they are more dangerous this year.

That leaves Manchester United, which, despite the end of Sir Alex Ferguson’s reign, remains one of the top five clubs in the world. Simply glancing at Group A would give one the impression that the Red Devils will advance easily to the group stages. However, there are no free points in this group, no side that can be expected to roll over. Every team that United will face is stronger than the FC Basel side that knocked the Red Devils out of the 2011 Champions League in the group stage.

All that said, while Group A looks to be in many ways the most exciting group, who aside from Manchester United is capable of making a deep run in this tournament? While any of these teams could make the quarterfinals, a semifinal appearance for even Shakhtar would be a surprise.

So Is There a Group of Death?

While Group A will be surprisingly competitive and Group F is deep and strong, Group D is the closest to a Group of Death in this year’s tournament. That said, none of these groups are set up to necessarily eliminate a title contender, which means that unlike last year, we enter the group stages of the UEFA Champions League without a true Group of Death. Instead we have a trio of groups that will offer consistently competitive matches, and no teams that will be left lamenting that a random draw doomed them to an early exit.