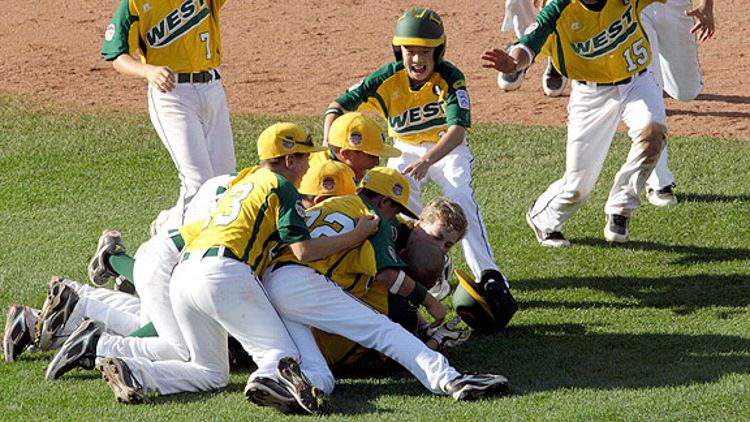 On Saturday, Shane Battier broadcast a complaint via Twitter.

“Why does the Little League World Series stop becoming a double elimination tourney at the American and foreign champ games? Makes no sense,” he tweeted.

My first reaction when I saw this tweet wasn’t to wonder why Battier, a professional basketball player, cared about fair play in youth baseball. Instead, I nodded my head, and felt a tiny bit vindicated. I’d been annoyed about the same thing all day, and thank god for Twitter, because where else could I find a venue for addressing the unfairness of something so … small?

On Aug. 21, Mexico and Japan met in round-robin play in the international division of the Little League World Series. Both teams were undefeated, and the game they played turned out to be one of the best of the entire tournament. Little League games are six innings long, but this one was tied and went into extras; Mexico prevailed in the seventh with a walk-off hit.

On Saturday, they met again. Japan had fought its way back through the losers’ draw, leaving just two teams in the international division. Japan jumped out to an early lead and won with relative ease. Mexico had now split their two games with Japan, and neither had the two losses necessary to be eliminated from the double-elimination tournament.

Last Wednesday, Montana and California met in round-robin play in the American division. Both teams were undefeated, and the game they played turned out to be one of the best of the entire tournament. Little League games are six innings long, but this one was tied and went into extras; Montana prevailed in the seventh with a walk-off hit.

On Saturday, they met again. California had fought its way back through the losers’ draw, leaving just two teams in the American division. California jumped out to an early lead and won with relative ease. Montana had now split their two games with California, and neither had the two losses necessary to be eliminated from the double elimination tournament.

The two narratives are almost carbon copies, and the injustice that befell Mexico and Montana was possible because the Little League World Series is not just a double elimination tournament; it’s a modified double elimination tournament. (“Should be called modified nonsense,” quipped Battier in another tweet.) The format is a new wrinkle this year, and here’s how the LLWS media guide explains it:

In other words, two teams in the same division can split a pair of games, and the one that advances to the overall championship is dictated by an arbitrary decision to make the second game more important. It’s a brutally unfair system, and Montana and Mexico have every right to feel cheated out of a chance win the tournament.

What makes the situation even more aggravating is how easily it could have been avoided with a third game. The LLWS even builds an off-day into the schedule before the American and international championships. Why not hold the first game on that open Friday, and play the second and deciding game, if necessary, on Saturday? Or, as an alternative, why not revert to the previous format, with two pools of four teams in each division and a guarantee that the American and international championship games would at least be contested between new teams? The reason can’t be attributed to television; In past years, all three championship games — international, American, and overall — have been held on a single weekend.

The fatal flaw in the modified double elimination format isn’t lost on other institutions. The College World Series, for instance, requires the “if necessary” game to ensure that a team won’t be eliminated with a single loss.

I asked Patrick Wilson, the vice president of operations for Little League Baseball and Softball, about the rationale for the new format. He said it reduced erratic scheduling, when too many games occurred on one day and not enough on another. It also eliminated the need for a numerical tiebreaker in the group stages, when three teams might finish with a 2-1 record, but only two could advance. That particular outcome struck me as far less egregious than this year’s troubles, but Wilson didn’t see the change as choosing between the lesser of two evils.

“Every year, we evaluate the tournament and all other aspects of the World Series,” he said. “We were well aware that the repeat game was a possibility, but we looked at the costs and benefits and made a decision. We made sure that the coaches were aware of the situation. They knew where they stood.”

He told me that I was the first member of the media to contact him about the new format, but he’d received “a small handful” of e-mails — less than 10 — from fans. He did say Little League officials would “absolutely” re-evaluate the format this year, as they did every year, and there could be a policy change when next year’s details are released around February.

Montana’s manager, Gene Carlson, called the format “a little bit strange,” but was taking the loss in stride. “It would’ve been nice if they had to beat us twice,” he told me. “But I don’t have any regrets. We weren’t expected to be here, let alone in the championship game. We were just happy to get as far as we did.” He confirmed Wilson’s view; they knew about the format coming into the tournament, and it was up to them to plan ahead.

Carlson’s reserve is admirable, but the fact is that this year’s tournament is unequivocally not baseball. The modified format wouldn’t be tolerated at the university level, and it might well spark a revolt if it was instituted in the majors. Why should Little League be any different?