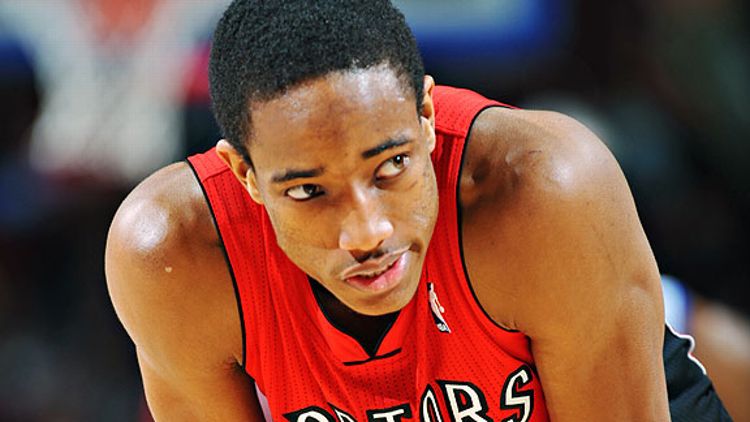 As part of our coverage of the NBA lockout, Grantland’s Jonathan Abrams checked in with DeMar DeRozan, the high-flying guard of the Toronto Raptors, to see how he is spending his new-found free time. DeRozan talked about still playing in summer leagues, his performance in the dunk contest, and Drake vs. the Game.

Grantland: It seems like you’ve been involved in nearly every Pro-Am game this summer. Is that how you’re staying busy?

DeRozan: “Yeah, just hearing a lot of pros playing in it and just getting a chance to play, especially with the lockout and everything going on. Having a chance to play consistently in front of fans in a different environment is definitely a cool thing.”

DeRozan: “I think he was pretty close to playing, especially when he came and played with us about two weeks ago in the Drew League, and saw how intense it was … I think he was definitely close.”

Grantland: In the back of your mind, do you ever think about what would happen if you got injured in one of these games?

DeRozan: “I don’t look at it like that at all. I just go out there and play. You can get hurt doing anything nowadays. But if you take the approach ‘I may get hurt in this game,’ it probably won’t turn out as well.”

Grantland: Have you had a chance to talk with your new coach, Dwane Casey?

DeRozan: “I talked to him a week before the lockout when they hired him. I got a chance to sit down with him and everything. He’s definitely a good guy. I can’t wait to start working with him. He was always a great coach. I got the chance to work with him the past two summers out in Las Vegas.”

Grantland: I’ve heard rumors that you had some more interesting dunks up your sleeve than you got the chance to show in last year’s dunk contest. True?

DeRozan: “I still want to show people how I was going to do it and everything. I had two more dunks that I don’t think people have seen before that are definitely creative. Hopefully, I’ll get the chance to show people. Next couple of weeks, I’m just going to go in the gym and probably do them and tweet them out, so people can get a chance to see them. A lot of people ask about them, so I’ll probably just do that.”

Grantland: Are you still upset over your premature elimination from the dunk contest?

DeRozan: “Nah, it’s over with now. I enjoyed myself and being a part of it, especially because it was back home. It was cool. The whole experience was great.”

Grantland: Would you ever do another dunk contest?

DeRozan: “I think I’m done with it now. I did it two years in a row. I had fun while I was doing it. I’m just going to leave it at that and be a spectator from now on.”

Grantland: How old were you when you met Brandon Jennings for the first time?

DeRozan: “I think I was in sixth grade when I first him. Since then, we’ve had a great connection on and off the basketball court.”

Grantland: Who wins in a one-on-one game between you guys?

DeRozan: “It’s going to be a good one, but I’m going to go with myself. I’m winning that one.”

Grantland: What about getting a one-on-one tournament of NBA players going during the lockout?

DeRozan: “Any idea, especially basketball-wise, with the pros is a great idea. It’d be cool, one-on-one, two-on-two tournaments. People just want to see us out doing something.”

Grantland: If every NBA player is in, who wins a one-on-one tournament?

DeRozan: “That’s a tough one. We’re going to have to battle that out. I don’t know. I think there would be a few fights before someone wins.”

DeRozan: “That’s tough. Drake’s my homie, but at the end of the day, I’m riding with my man, the Game.”