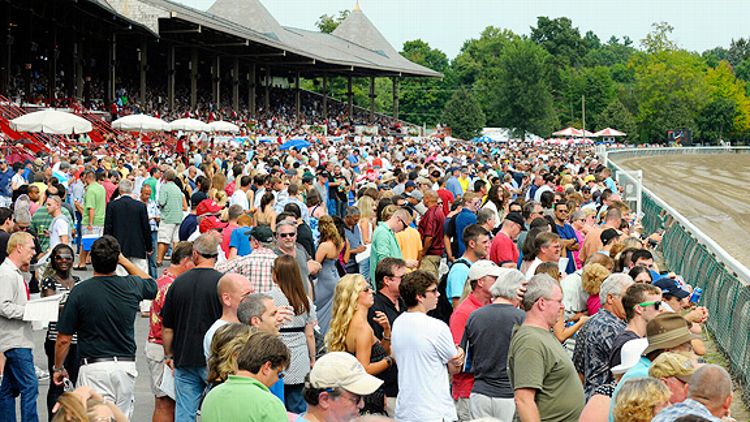 Elisabeth Donnelly thought horse racing was just a land of silly hats, Lilly Pulitzer dresses, and gambling … until she headed to Saratoga this summer to discover the appeal of the race track — beyond the burger stand.

Mary Ryan has been the morning announcer at the Saratoga Race Course since 1976. She is best described as “ageless.” While horses took to the track for a morning workout earlier this month, Ryan kept up a stream free-ranging patter: “I mentioned Storm Cat. He’s either passed away or been pensioned for stud duty … here comes Two Months Rent. And he’ll certainly make over two months’ rent with today’s race. There’s a minor break in equine traffic at the moment …”

She punctuated her syllables like Oprah on a giveaway episode. “Bill Mack Bill Mott won yesterday’s Ala-BA-ma! We have several FEE-male! trainers at the meet.” Ryan’s enthusiasm was in marked contrast to the morning crowd, mostly made up of young mothers with children dangling from their limbs and grey-haired bettors in white pants and crisp jackets. Tourists took their turn at the clubhouses’ box seats, a place where a strict dress code still reigned — ABSOLUTELY NO SHORTS OR DUNGAREES/GENTLEMEN SUITS OR SPORTS JACKETS REQUIRED/LADIES DRESSES SKIRTS OR SLACK OUTFITS — once the races start.

This is my second time at Saratoga. I had the chance to go once last summer, mostly on a mission to get a burger from the newly opened Shake Shack. I found the track to be overwhelming, like a county fair or a classic rock concert, where fans spent all day baking in the sun, making bets and drinking beer. It was crowded and hot. My burger was delicious.

But on an empty Sunday in August, a week before this year’s Travers Stakes, it was far easier to navigate. Tourists, families, and racing enthusiasts watched the horses work the track. Fans staked out patches of land with coolers and camping chairs. There were posters for an upcoming karaoke event, with the proceeds benefiting the Permanently Disabled Jockey Fund and a sign “saluting the winner of the first two legs of the filly Triple Crown — It’s Tricky.”

I passed a building where a rainbow of jockeys’ silks peeked through the window. It was dedicated to “the keeper of the silks,” former jockey-turned-silk washer Louis “Louie” Olah, according to a plaque outside, which read: “The little man in the colors room colored our lives with joy.” Twelve headshots of jockeys took up another wall. One stuck out. With his long eyelashes and smooth, unlined skin, he appeared to be the youngest of the crew.

At 8:30 a.m., the horses left the track, and the harrows raked the turf. Ryan signed off: “The track is temporarily closed, so HOOOOOOOLD your horses!”

It was pouring when I returned. The ten races slated to run had to be rescheduled. The track conditions changed to “sloppy” and “yielding.” Most of the races slated for the inner circles’ two grass tracks are moved to the outlying dirt track. During a break from the downpour, I met up with Richard Migliore, a former jockey who retired last year. His career spanned 30 years, with 4,450 wins and a slew of injuries. He has twice broken his neck.

Strolling around the race track grounds with “The Mig” is like walking with a small-town mayor. Every jockey waves and smiles at him as they’re escorted out onto the track. Men ask for his autograph.

Migliore, hustled through the crowd to get to the clubhouse, heading to the press room on the top floor. “Lightning freaks me out,” he explained. “I have a lot of metal in me.” The press room is quiet and convivial, with the hum of fingers typing away at laptops and taking in the spectacular view of the track and the finish line. We had a clear view of the first race.

Migliore said the sloppy track conditions mean that most of the day’s races will result in a spread-out field. “The ones that can handle it, they go on,” he said. “The horses that don’t, you see them straggling in. A lot of it is, mentally, if they have confidence in their footing.”

Here is the scene from the “horse crossing,” where inebriated spectators watch a parade of jockeys and horses:

Tispy Girl no. 1 replies, “Excuuuuse you!”

Tispy Girl no. 2 tells Tipsy Girl no. 3 that her dress is bunched up at her butt.

A child on a man’s shoulders asks: “Why are people who are not tall on horses?”

The pinnacle of the track is the placing judges’ booth, which hangs over the finish line, with windows that provide a bird’s-eye view. Three men greeted me — Marshall Cassidy, a former announcer with a rich voice, Stephen Foster, the head clocker and official timer, and Ralph Theroux Jr., a former jockey agent who grew up with horse racing. They are responsible for the order of finish, judging photo finishes, and providing information on the race to the stewards. The stewards deem it official, but the judges make it official.

They can figure out dead heats. Their hardest day was some years back, when all the jockeys and horses were outfitted in pink silks to fight breast cancer. They have the best seat in the house.

Theroux described their job as a “three-man ballet that takes up three minutes.” The red light outside their booth starts blinking, announcing to jockeys that the race is imminent. When the bell rang, I saw them dance. Retired placing judge Sentell “Sonny” Taylor Jr. comes in, keeping watch over the video monitors. Theroux and Cassidy have their binoculars up. They have their own language: “Three, four, eight, two. Two and eight on the bottom. Eight and two on the bottom. One in the red coat is coming, go! Three, eight, one, four. Good, that’s all. He’s getting wobbles but he’ll make it. Three, one, eight, and a photo finish.” I follow the men to the computer station where they photograph the horses at the finish line, a result that’s “accurate up to three tenths of a decimal point,” according to Theroux. “Anything less than half a length, you go to the photo.” In the photo, the horses, four and five, are clear, and everything else behind them is a blur. “Four beat five by a nose,” Theroux announced.

I take in the last race of the day surrounded by race-goers who paid $3 to spend the day at the track. There was a thrill to being in the mix of a crowd like that. We have a grand view of the horses and jockeys kicking up mud. Every half hour or so, there will be a few magic minutes, when athletes — jockey and horse — vie for position in a race, and a crowd of people — drunks, children, tourists, gamblers — will cheer, loud and lusty, without any distractions.