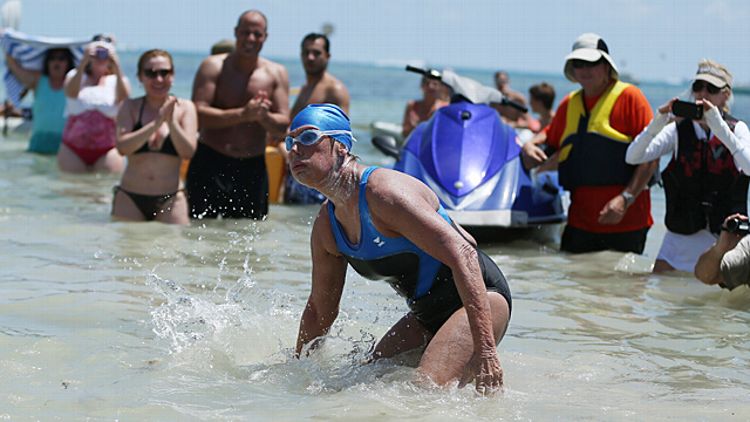 Who is Diana Nyad? Only the first person to swim from Cuba to the Florida Keys without using a cowardly shark cage. It was a journey of about 110 miles, and it took her 53 hours. Also? She’s 64, this was her fifth and final attempt, and she almost died when she tried it last year. She staggered onto the shores of Key West yesterday at 2 p.m., her lips swollen, looking about as confused as you’d be after swimming for 53 hours, and managed to stay upright long enough to give a victory speech:

There’s only one thing to say about someone like that, who made her first attempt to do the swim in 1978 and never quit trying, despite jellyfish, shark threats, exhaustion, asthma attacks, and dehydration. And that thing is this: She’s a badass of legendary proportions. She’s a badass of history.

Sometimes, though, you can only determine exactly how badass somebody is by comparison. To provide a scale, here are 25 badass situations that still aren’t as badass as Diana Nyad’s swim.

7. A shark riding a jellyfish that is itself riding Rambo.

8. A shark riding a jellyfish riding Rambo on a frozen football field.

11. The same as above, except the jellyshark named “Saddam Hussein” is coached by Nick Saban.

12. And Nick Saban is riding a shark.

15. The shark’s moonwalk is his fifth-most impressive story.

16. Because the shark can talk.

17. So we’ve got Rambo riding a jellyfish on a frozen North Korean football field, tackling a mythical jellyshark named “Saddam Hussein” that is coached by Nick Saban, whose talking shark “Neil Armstrong” will only tell the story of his moonwalk if you haven’t heard his four better stories.

19. When I say “Ray Lewis,” I don’t mean the football player, but the jellyfish who explodes near his enemies.

20. And he’s riding Abraham Lincoln. The real one, not an animal with that name. By all rights, Lincoln should be riding him, but Lincoln is selfless to a badass degree, so he’s all like, “Hop on, little fella.”

21. Lincoln has traveled through space and time to fight Kim Jong-un.

22. Kim Jong-un is there to try to keep Rambo from tackling “Saddam Hussein,” the mythical jellyshark. He has his reasons.

23. The situation now is that Rambo is riding a jellyfish (named “Ichabod,” since we haven’t covered that yet) on a frozen North Korean football field, and out of the corner of his eye he sees Kim Jong-un charging at him in a desperate attempt to keep him from tackling “Saddam Hussein,” the mythical jellyshark that has just called a play-action quarterback keeper (ignoring the advice of Nick Saban and his shark “Neil Armstrong”), but before Kim Jong-un can reach Rambo, Abraham Lincoln hurls “Ray Lewis” the exploding jellyfish at him, causing a huge badass explosion, and in the midst of that explosion Rambo hits “Saddam Hussein” so hard that it breaks up into its two component elements, a jellyfish and a shark, which immediately die because they are sea creatures that can’t breathe out of water.

24. And Nick Saban throws his clipboard to the ground in a cold rage as the fire burns around him, thinking that this whole trip has cost him a ton of recruiting time.

25. And Rambo and Abraham Lincoln high-five, and ride “Ichabod” and “Neil Armstrong” the talking shark back to America. “Can I catch a ride?” asks Saban. “Nope,” they say, and high-five again. And as they leave, “Neil Armstrong” launches into his no. 1 all-time story.

And none of that — none of it — is as badass as Diana Nyad.