Greinke May Be OK, But That Doesn’t Mean the Dodgers Are 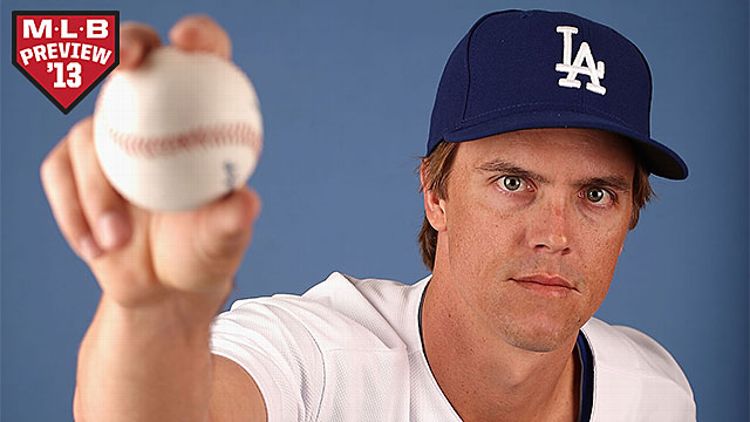 The news started filtering in late Monday morning. Zack Greinke, the Dodgers’ $147 million winter pickup, the biggest signing of the offseason, and the biggest signing ever for a right-handed pitcher, was scratched from his start, and would be flying to L.A. to have his elbow examined. Just like that, the promise of a potential World Series run this season appeared to go up in smoke.

Hours later, we got the update. Greinke wasn’t headed for Tommy John surgery. He had an inflamed elbow, one that would warrant two or three days of rest followed by a return to a progressive throwing program and a return to the mound in the relatively near future. That report calmed a lot of jangled Dodgers fan nerves. But the Greinke scare also underscored what figures to be a recurring theme in 2013: Even with a $220 million payroll, the Dodgers’ season could be hanging by a thread.

The problems start with injuries. Greinke sloughed off his recent elbow soreness, telling the Dodgers he’d dealt with similar minor pain in the past, but had never missed a start as a result. Still, Chad Billingsley is nursing a sore groin, adding yet another concern for a pitcher who has what the wonderfully named blog Mike Scioscia’s Tragic Illness calls a ticking time bomb of an elbow. Former closer Javy Guerra has a sore groin of his own, adding to the injury concerns that ate into his 2012 season. The Dodgers do appear to have ample pitching depth, with two of the team’s seven starting pitchers likely ticketed for the bullpen, barring a trade. But that depth could be fleeting because of Billingsley’s health concerns; offseason signee Hyun-Jin Ryu potentially being no better than a fringe starter or bullpen arm according to ESPN.com’s Keith Law; another former closer, Kenley Jansen, coming off surgery to repair a heart ailment; plus who knows what might be lurking in Greinke’s elbow.

It gets uglier in left field, where Carl Crawford and the remaining five years and $102.5 million left on his contract is still experiencing elbow (and forearm) soreness seven months after Tommy John surgery. If Crawford’s not ready for Opening Day, his likely replacement might be Skip Schumaker, a 33-year-old banjo hitter with no power, little speed, and limited defensive value. Behind him is a motley crew of veteran scrubs, including diving-into-first champion of the world Nick Punto and the regrettably overpaid Juan Uribe. At second base, Mark Ellis has missed 30 games or more in each of the past five seasons, with 52 games missed last year.

These issues, along with questions over Luis Cruz’s ability to produce as an everyday starter for a full season, doubts over Andre Ethier’s ability to hit lefties, and concerns that the best days of Adrian Gonzalez and Hanley Ramirez are already behind them, could make the Dodgers NL West underdogs against the defending World Champion Giants. This might seem crazy given the size of the Dodgers’ payroll. But L.A.’s potential shortcomings remind us that baseball wealth brings three looming pitfalls.

The first roadblock is limited roster space. Even with seemingly infinite money, teams only have so many slots to fill. The Dodgers were cautiously optimistic about Crawford’s health earlier this winter, projecting an outfield of Crawford, Ethier, and Matt Kemp. Given the lack of DH in the National League and the presence of Gonzalez at first, that left no room for the Dodgers to sign, say, Nick Swisher … or Josh Hamilton, Michael Bourn, or any other similar free agent. The Dodgers could have spent money elsewhere, but dropping millions (much less tens of millions) of dollars on middle-relief pitchers or part-time players will get you very little for your investment.

Los Angeles might’ve been able to upgrade a more important position like second or third base, except money’s not all that valuable if there’s nothing left to buy. With the Greinke purchase bringing the team’s starting pitching count up to seven and the outfield at the time looking full, there was more or less nothing out there for the Dodgers to pursue. More and more, we’re seeing teams lock up their best players before they can sniff the open market, leaving thin free-agent classes like the one we saw this winter. Even looking ahead to potential trade scenarios raises some early doubts: If Mark Ellis proves too gimpy to hold the starting second-base job, the alternative is likely a mediocre fill-in, given the Dodgers’ likely desire to leave the spot open for a potential Robinson Cano signing at season’s end. Third base? The only quality third baseman who appears to have a decent chance of getting traded in the foreseeable future is Chase Headley, and you wonder if the Padres would hand their rivals an All-Star–caliber player, or if the Dodgers have the elite prospects to reel in a player of Headley’s stature. If Crawford’s injury persists, you could perhaps close your eyes and dream of, say, nabbing Giancarlo Stanton from the Marlins … but the Dodgers have nothing to offer Miami, short of building Jeffrey Loria a second $634 million stadium where he can store his art collection.

Finally and most fundamentally, spending more money than any other team and flouting the luxury tax in a way even the Yankees don’t seem inclined to do (next year anyway) can provide a great competitive advantage, but only if the Dodgers’ player evaluation is sound. There are reasons to wonder if it is. Small reasons, such as handing a three-year deal to a mediocre player like Uribe for little reason other than a post–World Series glow, or gifting another three-year contract to an unimpressive relief pitcher like Brandon League. And bigger reasons, such as the way the team evaluated Gonzalez before pulling off last year’s megablockbuster. You can live with absorbing bad-to-terrible contracts for Crawford and Josh Beckett if Gonzalez is a true star player. But Gonzalez’s sharp drop in 2012, combined with the uncomfortable reality of player decline often whacking players after they reach the wrong side of 30, make you wonder if the quarter-billion-plus the Dodgers spent to pull off the deal might’ve been a reaction to a shrinking talent market in free agency, and a mistake in reading Gonzalez’s performance trends. With Allen Webster and other quality young talent gone via the trade route, the Dodgers have fewer avenues to fill roster holes, be it by promoting from within or trading top prospects for veteran help.

There are some Plan Bs out there. There’s Yasiel Puig, the Cuban outfielder signed for $42 million who’s got lots of raw ability and even has some wondering if he could answer the bell as Crawford’s replacement, especially after his .452/.438/.645 start in spring training. Of course if we’re going to fixate on 32 plate appearances, it seems only fair to add that Puig has struck out eight times and walked zero times this spring, and that he has only 95 career minor league plate appearances, none above Class A.

On the pitching side, Kyle Lohse is, incredibly, still out there. But the Dodgers would have to give up the 19th pick in the June amateur draft to get the 34-year-old Lohse, who’s coming off the best season of his career and is a prime regression candidate. In a recent conversation, one team executive pegged the value of a draft pick just outside the protected top 10 as being worth as much as $25 million if it hypothetically went up for auction, with picks a little further down still cresting into eight figures. If Greinke’s injury does run counter to Monday’s diagnosis and prove to be serious, maybe the Dodgers consider that kind of sacrifice. But if team president Stan Kasten was serious when he vowed to see the Dodgers become a scouting and player development powerhouse as well as a financial juggernaut, then probably not.

Even the Dodgers’ vaunted financial advantage could take a big hit. The team’s rumored TV deal with Time Warner Cable, said to be worth more than $7 billion, recently hit a snag. But the Dodgers’ attempts to shield most of the deal’s proceeds from becoming revenue-sharing money for smaller-market teams could be in jeopardy. As the New York Post’s Josh Kosman explains:

Guggenheim Partners and other owners of the team could lose as much as $1 billion of Time Warner Cable’s cash to Major League Baseball’s revenue-sharing plan because of the way the deal is structured, sources said.

Under the unusual 25-year deal, Time Warner Cable is guaranteeing SportsNet LA, the team’s new regional sports network, $4 a month from every eligible Los Angeles–area household — whether its pay-TV provider carries the new RSN or not, according to a source.

Because the cash is guaranteed regardless of how successful (or not) SportsNet LA becomes, MLB may treat it more like cash from a stadium naming-rights deal and force the Dodgers to share it with the other 29 MLB clubs, sources said.

In fact, the deal, hammered out in late January, has not yet been submitted to MLB for approval, sources said.

Very few other teams during the next 25 years can expect to count their local TV money in terms of billions, let alone the $7 billion or more potentially coming the Dodgers. But losing a full $1 billion of that windfall would still dent the Dodgers’ financial situation, even if the net result might be going from unlimited budgets to merely gobs and gobs and gobs of cash.

No one’s feeling sorry for the Dodgers, not with arguably the best pitcher in the National League in Clayton Kershaw, one of the league’s best position players in Matt Kemp, several other big names, billions in TV revenue likely on the way sooner or later, and an ownership group willing to shoot the moon to win. But for 2013, given the team’s slowly growing list of question marks and potentially stiff competition from the Giants and various wild-card contenders, it’s conceivable we could see this season end the way the last three in a row have already: with the Dodgers playing golf in October.