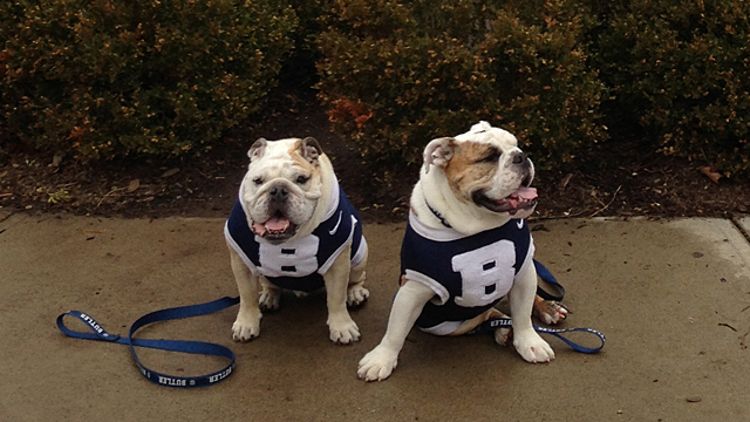 At 8:48 on the morning of January 24, 2013, Indianapolis fell to its knees. One of the town’s biggest celebrities had just announced his retirement on Twitter. Civilians reeled and the local media sprang to action. In just six weeks, Blue II, the eight-year-old English bulldog serving as Butler University’s living mascot since 2004, would pass the collar to Blue III, the one-year-old English bulldog handpicked to succeed him.

“You would have thought we shut the power off in Indy, it was such big news,” Michael Kaltenmark tells me. Butler’s director of web marketing, Kaltenmark is the man behind Blue II’s Twitter account and the rest of his robust web presence. He’s also the dog’s owner, or as his own Twitter bio puts it, Blue II’s “father.” Those dual roles mean he has escorted Blue, as everyone calls the dog, both on official appearances and pee breaks since he was only eight weeks old. In their nearly nine years together, they’ve forged an indelible bond as Blue has gone from beloved campus mascot to a national icon that appeared at consecutive Final Fours. “I feel like Blue and I blazed a trail,” Kaltenmark tells me.

A year ago Blue got a brother. Nicknamed Trip, Blue III immediately moved into the Kaltenmark home and began learning the way of the mascot. By the start of the 2012-13 basketball season, he was ready to share duties with his mentor.

Two days ago that ended. Senior night for four of Brad Stevens’s Bulldogs was the same for one of Kaltenmark’s. He’ll still hang around campus and make official appearances until May, but Saturday’s win over Xavier was Blue’s last home basketball game, and home basketball games are what Blue does best.

“My oldest son is retiring today,” Kaltenmark told me. Here’s a diary of that day.

Indianapolis’s local NBC affiliate seems empty early on Saturday morning. That’s OK; Kaltenmark knows his way around. He and the dogs are regulars on the local news circuit, where Blue and Trip get close-ups and compliments while Kaltenmark gets called Klatenmark. In the studio he squeezes the stars into their custom-sewn Nike jerseys, which are so form-fitting they should be sold to insecure dogs as Spot Spanx. Or Spand-Rex.

With a dog on either side, Kaltenmark waits for his cue. An old pro, Blue waits too. But Trip is antsy. First he barks, then he rolls, then he presents his belly for a rub. “He’s the equivalent of a 7-year-old kid,” Kaltenmark says, bending down to kiss Trip’s fat, folded-up forehead. When Trip pulls on his leash Kaltenmark scolds him, then immediately asks for a kiss. Trip obliges, slurping Kaltenmark’s face, which could win him second place in a Jay Bilas look-alike contest, with his sleeping bag-size tongue.

Nicole Misencik, WTHR’s meteorologist and resident dog interviewer, squats next to Blue and live TV begins. The dogs are angels until they’re not. Trip lets out a grunt. Blue responds. Trip responds to that response until the segment devolves into a cacophony of barks. “After they’ve heard me talking long enough they just want me to be quiet,” Kaltenmark says when the cameras are off.

Before bathing at a local dog spa, Trip tries to intimidate a golden retriever who barely notices. It’s hard to seem tough when you look like Jabba the Hutt but sound like a bichon with a cold. In the water Trip is calm. For him, bath time is a good time. But not for Blue, who finds a purple rubber chicken to occupy himself as he’s getting clean. He liked the already-beakless bird, and on the way out decides it should accompany him home. Celebrities can be so entitled.

Blue and Trip are as much Kaltenmark’s dogs as they are Butler’s. To Everett, Kaltenmark’s 2-year-old son, they’re brothers. “Did you give Trippy a hug?” Kaltenmark’s wife Tiffany asks her son after we walk in the door. He hasn’t, so he does, bending at the waist to wrap his arms around the dog’s head. The embrace is quick but Trip reciprocates, pushing his toddler-size melon back up at Everett. “I view them pretty much as offspring,” Kaltenmark says of the dogs. He would almost certainly say the same about Everett.

The dogs take turns getting rubbed by Tiffany. It looks like any interaction between dog and master until Kaltenmark mentions she’s a physical therapist. Her petting isn’t petting, it’s massaging. And it explains why Trip replaces Blue between her legs the moment the old-timer walks away.

With a long night ahead, Blue and Trip settle in for a few hours of napping, barking at the construction workers outside and getting their heads rubbed. “They tire pretty easily,” Kaltenmark says, “but it doesn’t matter how much I work them, they’re always ready to go when the lights go on.”

At center count in an empty Hinkle Fieldhouse, Blue and Trip pose for the first of today’s many photos. But before the shutter clicks, Kaltenmark must get them to sit still as he runs out of frame.

“Sit and stay,” he repeats walking away from Blue, who does neither. He’s not defiant in his defiance, just a happy lug trying to stay next to his best friend. Off to the side Trip hears a squeak from the photographer’s ladder and responds by sending his ladylike bark bouncing around the empty arena. When Blue finishes the pup is up. “Sit and stay,” Kaltenmark repeats, walking away from Trip. He listens for a nanosecond, then bolts for the camera lens 12 feet in front of him. It probably looked like a Snausage from his angle.

Next, it’s Kaltenmark with both dogs. With the past on one side and the future on the other, he beams. His three-piece suit is smeared with patches of fur and slobber, but like the leash in each hand, that’s part of the uniform. With Kaltenmark’s arms around them, the dogs sit and stay without being told.

Kaltenmark walks the dogs by the students waiting to be the first fans in Hinkle. “Big day today,” one calls out. Another is holding a pillow in the shape of the retiring mascot. Another hands Kaltenmark a bag of homemade dog treats. Another snaps a close-up of the six-inch string of drool hanging from Trip’s sloppy maw. The dogs allow themselves to be petted, but they don’t stop for it. They may be cute, but they’re here to work. As usual, that means making appearances. Today’s is with a group of local Girl Scouts at the campus gym.

The 45-second walk to the Bulldog Club takes 15 minutes, as Blue and Trip pose with dozens of fans in Hinkle’s hallways. Some people ask permission first. Others ask which dog is which (Trip’s the thicker one), how much they weigh (58 and 61 pounds), or what Blue will do in retirement (not a lot). Occasionally, someone asks something memorable. “One person asked me if there was an electric fence that kept the dogs on campus and they just roamed around all the time,” Kaltenmark remembers.

For the next 31 minutes Blue and Trip hold court in Hinkle’s alumni club. That means more pictures for them and near-anonymity for Kaltenmark, who comes alive when a woman suggests Blue should lose weight. “These are some of the fittest bulldogs you’re ever going to see,” he tells me.

Blue takes the court with Kaltenmark for his last starting lineup. Setting up at the end of the human tunnel players form to high-five the starters, Blue gets a head pat from the guys who helped make him famous. The cheers rendering his bark inaudible are mostly for the players, but Kaltenmark knows some are for Blue. “There are people who come for the game and there are people to come to see the dogs. They’re part of the show,” he says.

For the last time in his career, Blue scuttles across the court to grab a body-length rawhide bone from the student section. Now the cheers are unmistakably for him. He walks off the court and up 20 or so stairs to his seat, bone still in mouth. It is the last time Blue would perform those hallowed pregame duties. Ever the professional, he shows no emotion.

It’s halftime, or showtime for those who’ve come to see Blue. He takes center court, followed by Kaltenmark and Trip. The collar, a fancy strip of blue leather covered in silver embellishments, is taken from Blue’s neck, put onto Trip’s, and the transition is complete. Blue is mascot emeritus, Trip is mascot mascot and neither looks to know the difference.

Kaltenmark does. Before taking the court he told me he wasn’t sure how he would respond to the rush of emotions. “I have a feeling I might lose it,” he said. And while I can’t confirm the dryness of his eyes, I know that when Hinkle rose to its feet for one final salute to Blue, and Kaltenmark lifted the hulking mascot four feet off the ground to survey the adoring crowd, I got a little misty.

This is Blue’s last time in front of Hinkle’s home crowd, his second family over nine seasons. Just a mention of the word Hinkle gets him to do that cute sideways head thing dogs do. But if he ever walks on this court again it’ll be as a legend, not a star. The logo in the middle of the court, his face for nearly a decade, is now someone else’s.

It’s not off to doggie Boca for Blue, though. He’ll still come to work with Kaltenmark and Trip every day. He’ll still get pictures taken of him when he walks campus. He’ll still let students pet his head for good luck on their finals. But it’ll be done for fun, not work.

The second half is still to come and postgame fan meetings are planned, so there’s still more posing and petting and even a little play-by-play work to do, but this is a diary of Blue’s last day on the job, and his job here is done.

Adam K. Raymond (@adamkraymond) writes about sports, pop culture, and politics from his apartment in Indianapolis.

Greinke May Be OK, But That Doesn't Mean the Dodgers Are