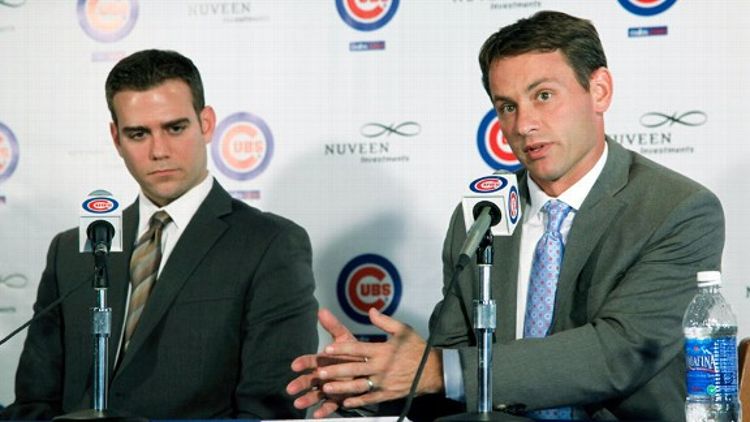 They’re coming off two straight fifth-place finishes, with very little premium young talent. They have virtually no chance of winning next year. Yet when the Chicago Cubs’ top player operations jobs came free, they became two of the most coveted positions in years — enough to woo not one, but two sitting GMs to the North Side.

So now that Theo Epstein and Jed Hoyer are running the show in Chicago, what can they do to turn the Cubs’ fortunes around? Here are five moves we’d like to see them make right now:

1) Sign Grady Sizemore. If the only major league team Sizemore has ever known won’t even give him $9 million to play out a one-year option, you know he’s not quite right. Knee injuries have turned a former top-10 MLB player, a five-tool threat at a premium position, into a gamble. If you’re the Cubs, it’s exactly the kind of gamble that’s worth taking. One of my favorite moves of Theo Epstein’s tenure with the Red Sox was signing John Smoltz to a one-year, incentive-laden for the 2009 season. Smoltz turned 42 that year, and was dealing with multiple injuries, but he was just a year removed from a dominant season as a starter at age 40, with a Hall of Fame track record.

Sizemore doesn’t turn 30 until August, and has enough skills (notably impressive power and instincts) to make up for the loss of speed he’d deal with even in a best-case, post-injury scenario. Top prospect Brett Jackson might be ready to take over the starting center-field job on Opening Day … or he might not. Sizemore could serve as a bridge to Jackson and a replacement for Marlon Byrd once his contract’s up after next season. Or he could slide in alongside Jackson right away and make Byrd half-decent trade bait to fill other needs. The Cubs’ revenue stream isn’t that far behind Boston’s, so Epstein and Hoyer should take advantage: take a shot on mid-priced lottery tickets that lower-revenue teams wouldn’t dare sign, starting with Grady Sizemore.

2) Explore a long-term contract with Matt Garza. The former Twins and Rays starter shined in his first go-round in the National League, riding weaker competition and concurrent skills progression to a career year. Garza established career-bests in strikeout rate, ERA, FIP, xFIP, and home run rate, while posting the second-best walk and groundball rates of his career. Garza and his agent Nez Balelo have to wonder if an arbitrator might rule against his mediocre (and undeserved) 10-10 record last year, and how his superficial numbers might look in 2012 in front of a weak Cubs team, so there’s incentive on their part to get a deal. From the Cubs’ perspective, the staff that once boasted three stars in Kerry Wood, Mark Prior, and Carlos Zambrano figures to have none of the above next year, with Ryan Dempster the only likely better-than-average option in the rotation (Dempster fired 200-plus innings for the fourth straight season in 2011, while Garza and Dempster combined to throw 10 quality starts last year in which they took the loss). Garza’s made 126 starts during those same four seasons, turns 28 later this month, and the price for free-agent starting pitchers keeps surging. A four-year deal with a high average dollar value could keep the Cubs away from the type of monster commitment that can handcuff a payroll, while Garza hitting the open market again before his 32nd birthday could be appealing on his end, too.

3) Avoid signing Albert Pujols or Prince Fielder. Sizemore doesn’t figure to cost much, and Garza’s still two years away from free agency so it’s a different scenario. On the other hand, Pujols’ potential red flags range from concerns about his age to his asking price, and Fielder’s build and limited skill set raise concerns about other players of similar pedigree. More than anything, the timing isn’t right. The Cubs probably aren’t one player away from winning a pennant, even if that one player could be worth seven-plus wins like Pujols was last year (Fielder bashed 38 homers and knocked in 120 runs in 2011, but was worth just 5.5 wins above replacement due to the high offensive standards of other first basemen, his lousy defense and lousier baserunning). Other premium free agents will come along when the Cubs are better positioned to make a strong run at a title. Best to steer clear of $200 million investments until that time arrives.

4) (Keep) spending over slot in the draft. The Cubs already have a recent history of being aggressive on draft day, shelling out big bucks for the likes of Jeff Samardzija and many others. If anything, Epstein and Hoyer can and should accelerate that trend. Plenty of small-revenue teams have built winners through drafting and player development. But so did the Red Sox, whose nucleus consists of homegrown talent like Jacoby Ellsbury, Dustin Pedroia, Jon Lester, Kevin Youkilis, Jonathan Papelbon and Daniel Bard, along with other top players like Adrian Gonzalez acquired via trades of in-house prospects. At a certain point, a revenue-limited club will stop bidding on an elite draft prospect, even while understanding full well the value of that commodity. The Cubs should have no such problems.

5) Find a manager who can complement and propagate the organization’s philosophy. The Rays found that manager in Joe Maddon, someone with the right temperament to lead a clubhouse full of young, untested players, but also the analytical mind to embrace advanced analytical concepts and the intellectual flexibility to listen to others’ ideas. Epstein could tap his old friend Terry Francona to follow him to Chicago. Maybe he goes after Mike Maddux or Dale Sveum as has been rumored. Maybe another yet-unnamed candidate fills the role more ably. But the goal should be to find someone who’s more than a name hire or a reputation hire. It might well be someone who’s never managed in the big leagues. If the Cubs find their own Maddon, someone who can grow into the job just as the next generation of Cubs stars grow into theirs, they’ll have hit their target.