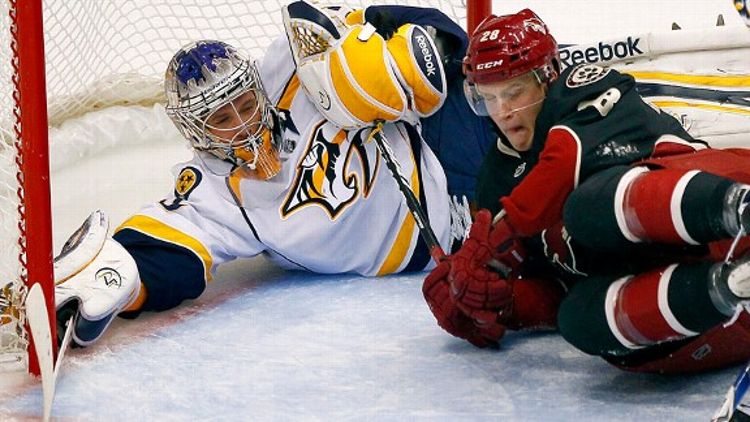 “SLASHVILLE,” screamed the cover of The Hockey News‘s “Money Issue” that arrived in my mailbox just yesterday. “Suter. Weber. Rinne. Who Would You Kiss Goodbye?”

Like a multiple choice test, we can now eliminate at least one of those answers. The Nashville Predators, a team closely-watched around the league this season as it figures out how to handle a tangle of two top defensemen and a stalwart goaltender who are all on the verge of some form of free agency, began to unravel yesterday when they came to terms with goalie Pekka Rinne on a 7-year, $49-million deal.

It was a pretty sweet 29th birthday present for Rinne, who was drafted by Nashville in the eighth round in 2004. He has been part of a conveyer belt of goalies identified-by and developed-within the Predators’ defense-first system championed by coach Barry Trotz and bolstered by legendary goalie coach Mitch Korn (who once worked with Dominik Hasek during his glory days with the Buffalo Sabres.) The Finnish netminder celebrated his birthday and new windfall with a 35-save shutout over the Phoenix Coyotes, his third blanking of the season.

Reaction to the deal has been mixed. On the one hand, Rinne is by most definitions one of the league’s best in breed — he earned second in Vezina Trophy (best goaltender) voting last season and placed fourth for the Hart (the league’s MVP) and so far has started every game for the Preds. On the other hand, goaltending can be a fickle position, that’s a whole lot of dough, and Nashville’s own status as something of a goalie factory almost ends up working against it — can’t they just churn out a new, cheaper model?

But with Ryan Suter and Shea Weber, unrestricted and restricted free agents after this season, watching how this all plays out, getting Rinne nailed down was as much a sheer show of commitment as anything else. The Predators are not a team who are facing salary cap restraints, but nor are they a team with a bottomless pocketbook. Dealing with Weber and Suter will be a difficult task and no one would be surprised if they can’t end up affording all three players. But they’ve inched closer, at least. One down, two to go.

Other goalie news from around the league:

It’s been a rough go for Jaroslav Halak this year, but this stop on Edmonton’s Taylor Hall was a beauty. Ho-ly jumpin’ indeed.