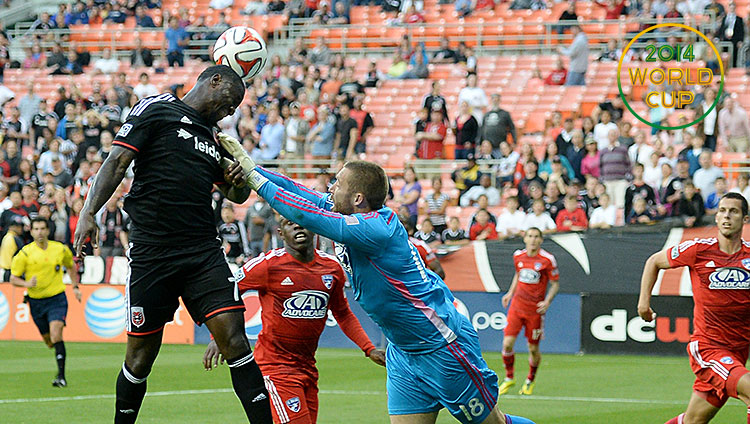 In my day, I was the most dangerous striker you ever played against. It’s just that my day was in April 1982, in an interschool game, when a would-be thunderous shot fluked into being the most exquisite chip over a sun-blinded keeper in his own six-yard box. My teammates spent the rest of the game passing to me in fresh, awed expectation, and I’d prod the ball back to them carefully, trying to look mercurial and dangerous.

In my next game, flush with newfound confidence, I played a perfect no-look pass in the first five minutes, before peeling off for the expected return offering. It didn’t come, I didn’t do anything else, and since then my form has dipped. That said, once I start scoring again, I know I’ll never stop. For I am streaky and it’s just a matter of time …

If there’s one thing strikers are supposed to know about, it’s timing their run. Not just in games or individual plays, but also when it comes to the more nebulous proposition of “rounding into form at the right time” — or, as the last week has shown, hitting a scoring streak just as the national team coach is hovering over a list of names with a ballpoint pen.

Therein lies the rub for Johnson. Since moving from Seattle to D.C., and securing a designated player wage in doing so, he has done lots of little things right, according to his club coach, Ben Olsen. But he hadn’t scored a goal since his arrival. And really, after a succession of strikers who’d perfected the art of not scoring for D.C. last year, that had the potential to make Johnson something of an expensive redundancy.

Yet I’m quite ready to believe that, having now scored, EJ will go on to do what his assistant coach Chad Ashton had hopefully suggested he might do in a pre-breakthrough interview during Saturday’s game, which is to go on and score goals “in bunches.”

His change in fortune came too late, though, to force his way into the the USA squad for Brazil. Instead, Chris Wondolowski was called up. Wondo, you may remember, hit a rich vein of international form with a flat-track bully act in the Gold Cup last summer, where he broke his international scoring drought by stealing Belize’s and Cuba’s lunch money.

Crucially, he followed that up by grabbing goals against South Korea and Mexico this year. That international hot streak, and Wondolowski’s natural qualities as the kind of poacher you might want to throw into a tight game against fatigued opposition, was apparently enough for him to get the nod over Johnson in USA coach Jurgen Klinsmann’s provisional 30.

Johnson had had his own run of form at a time roughly correspondent to Wondolowski’s — he’d gotten vital World Cup–qualifying goals and Gold Cup goals, and until this year, could legitimately point to those goals coming against sterner international opposition than Wondolowski had managed to score on. Johnson had even gone on a neat tear of form in MLS more recently than his San Jose rival. (Wondolowski later revealed he spent much of 2013 playing with a foot injury that saw his prodigious 2012 scoring rate fall off.) But Johnson’s 2013 hot streak ended with Seattle’s late-season implosion. As the Cascadian postseason inquests started, Johnson was on his way to D.C., with a stumble in momentum he’s only now recovering from.

And that’s a shame, because the overall arc of Eddie Johnson’s renaissance, since his return from Europe, has definitely trended consistently upward. He picked a bad time to hit a plateau, and the wrong coach to do so with. One result of Klinsmann’s insistence on relying on players in form, and his belief that the benchmark is European club competition, has been that MLS- or Mexican-based players in contention have little room for error. They need to be in peak form for their clubs to be considered (ask Herculez Gomez), or at the very least, they must emphatically seize the limited international opportunities they get.

The latter has been the case for Wondolowski, who hasn’t come close to his 2012 MLS form in domestic play, but who has carpe-diem’d his way into the provisional squad with decisive interventions when it counted. When he met Michael Bradley’s cross to give the USA the lead against Mexico last month, it felt like a pivotal moment in his favor.

It reminded me of watching a pre–World Cup game in Amsterdam in 2002 and seeing a line of England players waiting to turn home a David Beckham cross at point-blank range. Among them, at the back post, was Kevin Phillips, poised to score his first international goal in a series of frustrating cameo auditions. But instead, the ball went to England debutante Darius Vassell, nabbing a draw for England, and taking a step toward the squad Phillips would never come close to again.

Having almost literally jumped the line, Vassell had hit that crucial streak of form, momentum, call it what you will. Whatever it is, like an away goal, it seems to count double in the period between qualification being confirmed and tournament play starting. Wondolowski has hit it, too. So when Johnson rose at the back post on Saturday night, I thought of that Wondolowski goal against Mexico last month. Cruel as it is to miss out, you’ve got to time your run.