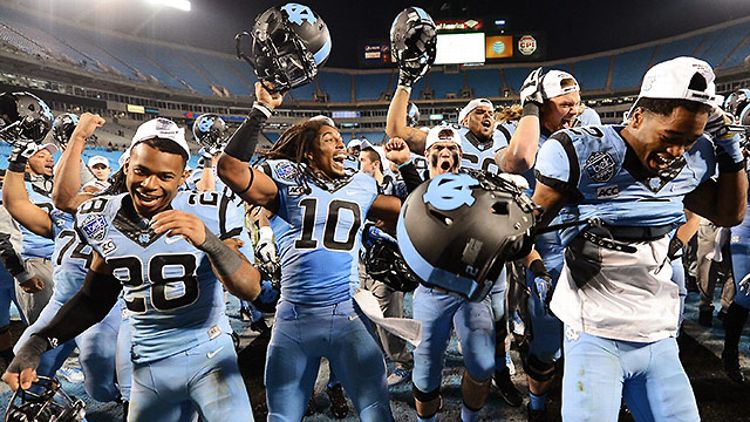 On today’s itinerary: hitting the high points of the weekend action, glancing over the glut of bowl game goodness headed our way today, and exhausting our remaining supply of Belk puns.

• Military Bowl: Marshall 31, Maryland 20. How sure are we that Maryland, and not Marshall, is the school leaving its current conference for the Big Ten?

Oh Doc Holliday. Fourth and inches punt from inside the 50. So sad.

That’s the Thundering Herd making sweet, fluttery eyes in your general direction, Jim Delany, and don’t act like you aren’t flattered. In other notable Military Bowl events: Were you aware that Rakeem Cato could levitate?

You laughed at the hypnotist show the Herd and Terps were taken to earlier in the week, but look at that stat line, and also at how Cato’s feet are CLEARLY not touching the ground. “Today, we just weren’t able to get off the field on third down, defensively,” Maryland coach Randy Edsall said after the game. Unlike some people.

• Texas Bowl: Syracuse 21, Minnesota 17. Look who’s back, and we are happy about it! Look who else is back, and not for the better! The Golden Gophers scored their first offensive touchdown since their November 9 victory over Penn State, on a 20-yard connection from Mitch Leidner to Maxx Williams in the fourth quarter. A second touchdown pass followed about two and a half minutes later, along with a successful two-point conversion to hand Minnesota its first lead of the game. That lead held until almost the final minute of regulation time, when Terrel Hunt’s 12-yard scoring dash — set up by this monstrous punt return — put the game away for the Orange. For his troubles, because Texas Bowl, a hat:

• Fight Hunger Bowl: Washington 31, BYU 16. So, about the notion that Washington might show up listless following Steve Sarkisian’s departure for USC:

Friday night in San Francisco felt like nothing so much as a series of good-byes to players whose talents we’ve admired: Keith Price, one of the Weeble-est quarterbacks of his generation, who threw one final touchdown pass to Austin Seferian-Jenkins before exiting the field with a rib injury; ASJ himself, who announced his intent to enter the NFL draft following the game; Kyle Van Noy, whose last collegiate outing included a highlight-reel hit on Bishop Sankey; and maybe Sankey himself, who ran for two scores, recently received a third-round draft grade, and has not yet divulged his plans for 2014. Happy trails, all. • Pinstripe Bowl: Notre Dame 29, Rutgers 16. They lit the Empire State Building for this thing, did you know? Onlookers would have been better served by simply projecting Louis Nix’s in-game Twitter feed on the walls:

Just like we planned….make the game look close during the first quarter.

Cincinnati responded to this compliment by thoroughly dishonoring the name of #BelkCats, allowing North Carolina to score on a 78-yard kickoff return and an 86-yard punt return, and permitting five sacks of Brendon Kay, one for a safety. That 86-yarder was Ryan Switzer’s fifth punt return for a touchdown this season, tying the FBS single-season record. In unhappy news: Tar Heels offensive tackle James Hurst, who set the program record for career starts (49) with his appearance Saturday, was knocked out of the game with a left leg injury in the first half, which North Carolina later reported as a non-displaced fibula fracture. • Russell Athletic Bowl: No. 18 Louisville 36, Miami 9. Your bowl is his home. Welcome to the Schnellydome:

Teddy Bridgewater, a low-flying redbird on so many radars since Louisville’s October plummet from the ranks of the undefeated, began the evening by getting downed for a safety on his first dropback. He completed 35 of his 45 attempts, for 447 yards and three touchdown passes (this was a favorite), and whatever the hell this was, while adding a rushing score. He probably stayed in the game longer than he should have. We were petrified he’d get hurt in a blowout. We also didn’t want him to stop, ever.

We should speak also of Louisville’s defense, which enjoyed the advantage of playing a Miami squad sans Duke Johnson, but still went around doing things like this. The Canes finished with 174 yards of offense to Louisville’s 554, with just 14 of those 174 coming on the ground, despite 28 rushing attempts.

So long and get paid, Teddy. Until next time, RAB Twitter. Take us home, Louisville tackle Jamon Brown:

With Devin Gardner nursing a broken foot, the Wolverines turned to freshman backup quarterback Shane Morris, who made his first start without generating headlines for bad reasons, which is actually a pretty OK outcome considering his youth: Morris was 24-for-38 for 196 passing yards and an interception, plus 43 rushing yards (mostly thanks to this). Wolverine adherents have a lot more to howl about concerning K-State’s Tyler Lockett and the boys in maize and blue tasked with stopping the Wildcats’ star receiver from doing things.

Michigan now enjoys a transitive loss to North Dakota State, if you’re into that spiteful kind of math, and opens next year’s regular season against Appalachian State. The previous sentence is a compound sentence for no reason at all. There’s also a real-math consequence to this loss, displayed in the following Notre Dame statement, which the Irish tastefully refrained from releasing until the morning after the game:

Football Bowls and Where to Find Them

• Armed Forces Bowl: Middle Tennessee vs. Navy. Only one of the three service academies wound up bowl-eligible this season, so Navy will be counted on to defend the honor of our armed forces’ football units in this appropriately named postseason contest. The Mids’ chief obstacle to doing so will be the Middle Tennessee State Blue Raiders, a team that is middling (SORRY) at stopping the run — which is just a wee bit of a problem, as running is pretty much all Navy does. Good luck bottling (LIKE A SHIP) (SORRY AGAIN) quarterback Keenan Reynolds, who has scored 29 rushing touchdowns this season, which, if he were an entire team, would tie him for 32nd nationally. According to Navy’s research, only two players have recorded 30 or more rushing scores in a single season: Barry Sanders in 1988 and Montee Ball in 2011.

The Armed Forces Bowl kicks off at 11:45 a.m. ET on December 30, with coverage on ESPN and WatchESPN.

• Music City Bowl: Ole Miss vs. Georgia Tech. Speaking of Teams That Run a Whole Bunch and the Defenses That May or May Not Be Interested in Workable Solutions: Georgia Tech rolls into Nashville wielding a triple-option offense schemed up by the guy who turned Navy into perennial Commander-in-Chief’s Trophy toughs to begin with. That’s unwelcome news for the Rebels, whose defense is nothing to write a Hard Rock Cafe postcard home about. Fortunately for Ole Miss, Tech’s defense should also be vulnerable to the attentions of quarterback “Dr.” Bo Wallace and his merry band of downfield threats, as long as the Rebels can keep Jackets defensive end Jeremiah Attaochu from tugging on Wallace’s stethoscope too often. Vegas likes Ole Miss by about a field goal at the moment, but we’re giving the edge to Tech, based on the seething rank jealousy permeating GT’s sideline over how close the Rebels came to having Admiral Ackbar as a mascot.

The Music City Bowl kicks off at 3:15 p.m. ET on December 30, with coverage on ESPN and WatchESPN.

Sweet mother of Puddles, are we ever giddy for a game that looks like such a cakewalk for a list of reasons so long it has circled the globe, crossed the international gremlin dateline, and sneaked back up behind you. Don’t turn around.

Marcus Mariota says he’s healthy. Byron Marshall is back. The Ducks’ defense can handle the Longhorns. Oregon can and should win this one paddling away, earning a multi-score victory to sweeten the end of one weird-ass season.

Should ain’t will, though. Teams lose bowl games for dumb reasons. It happens all the time, and you can’t pull one intangible thread in this year’s Alamo Bowl without snarling at least a couple of others. Is the differential between Oregon and Texas surmountable because this is Mack Brown’s final game? How does Nick Aliotti’s retirement move that needle? Is the team that was bored with the Rose Bowl going to care if it loses the Alamo Bowl? Is it OK if it doesn’t?

It is, because these kids give us enough of themselves, and to ask that they also feign contentment seems uncomfortably feelingsbally. All we ask is that this game not be a sleepwalk. Whoever wins. This is Texas. Let’s see some heels kicked up, whatever happens.

Brown got Mark Helfrich a present. There is no reason to suspect these are poisoned.

The Alamo Bowl kicks off at 6:45 p.m. ET on December 30, with coverage on ESPN and WatchESPN.

• Holiday Bowl: No. 14 Arizona State vs. Texas Tech. It’s been a tale of two seasons for both Tech and ASU. For the Red Raiders, the two seasons have been Weeks 1-8 (seven wins, no losses, 41 points per game) and Week 9-present (zero wins, five losses, 49 points allowed per game). For the Sun Devils, the two seasons are Everyone Except Stanford (10 wins, one close loss to Notre Dame) and Oh, Yeah, Stanford (two losses, including a 24-point drubbing in the Pac-12 title game). Fortunately for ASU, our crackerjack research unit has determined that Texas Tech is not Stanford. Probably. Here, enjoy Kliff Kingsbury befriending a dolphin:

The Holiday Bowl kicks off at 10:15 p.m. ET on December 30, with coverage on ESPN and WatchESPN.