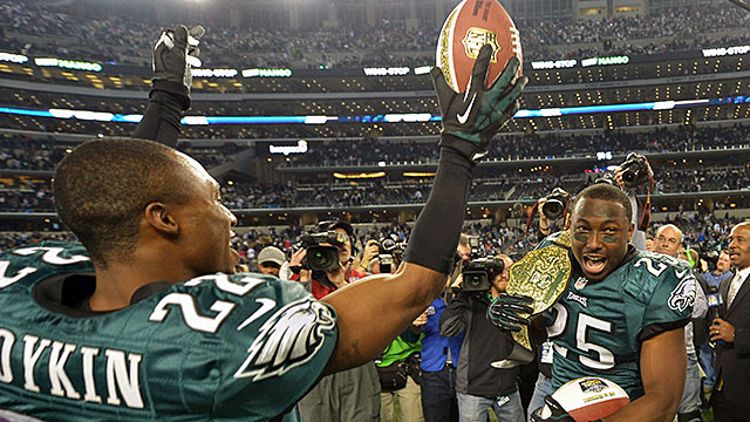 So to celebrate the title game in Texas last night, Chris Ryan (an Eagles fan forever worshiping in the church of Chip Kelly) and I (a Cowboys fan forever battling the demon Jerry Jones) decided to recap the final game of the regular season.

Do You Believe in Kyle Orton Miracles?

Andrew Sharp: Almost nothing on Twitter is worth preserving for history, but everyone should remember that one time the Cowboys pinned the hopes of the franchise on Kyle Orton. OUR TIME.

And it was awesome.

For about eight weeks I’d been expecting a play-in game in Week 17, knowing deep in my soul that this season would end in the most heartbreaking way possible. This is how things work when Tony Romo is your favorite team’s quarterback. Horrible, heartbreaking endings happen to Romo as a rule, so eventually you just start planning for it. Throw in Jerry Jones and all the awful karma he adds to everything, Jason Garrett and his allergy to common sense, and a defense that hasn’t had a good secondary since Bill Clinton was president, and there’s more than enough reason to bet against the Cowboys in any big game. Week 17 was always going to end with the Eagles winning a play-in game.

But subtract Romo and the cloud of doom that comes with him, throw in Orton and rock-bottom expectations, and … who knows!

This went from being the classic game that Tony Romo and the Cowboys lose, to a game for which everybody counted Dallas out six days before the opening kickoff. I swear this actually made it all more fun.

Four other memories from the Kyle Orton Era.

• It was the time the Cowboys drove me crazy enough to not just accept Kyle Orton as my favorite team’s starting quarterback, but embrace him with open arms. This is a new high/low of Cowboys insanity.

• After Cris Collinsworth spent a solid five minutes breaking down a play clock screw-up that screwed Dallas, Ol’ Gunslingin’ Kyle Orton made it all irrelevant with a 32-yard touchdown to Dez Bryant to bring them within two. THE MIRACLE WAS HAPPENING.

• Kyle Orton played well, regardless of the avalanche of jokes that came at the end. He made all the throws, kept Dallas in the game, and you couldn’t have asked for much better from any backup in the NFL. Fuck the haters.

• But yeah, just when Orton was ready to lead them to a game-winning field goal and I let my guard down … It ended the way all the other big Cowboys games do. Everything is horrible.

But Orton? That was fun. He’s cool with me forever.

Chris Ryan:
Let’s briefly review the year in Cary Williams. He came to Philly as a free agent from the Super Bowl champion Baltimore Ravens. He signed a three-year, $17 million deal and promptly distinguished himself by missing some OTAs because he was “picking out sconces” for his house, attending his daughter’s dance recital, and getting some dental work done. When the friendly Philly media/fan horde flipped out, Williams said, “It’s just funny. I mean, fans, I love y’all, but jeez, give me a break … If I was a guy that had three kids with three different women and I was a womanizer, you’d be reporting that. Now I’m a guy that wants to go see his girl’s recital and I’m a bad guy. Like, come on, man.”

Once he did show up at camp, he started a fight during a scrimmage with the Pats, and defended his actions by more or less calling the Philly defense soft (“[I]t definitely would have been a different situation if it was in Baltimore. It wouldn’t have been a fun practice for the Patriots, I can tell you that”).

When the Riley Cooper situation went down, he was among the few Eagles to not sing “Kumbaya” from the hymn book, getting into a practice altercation with Cooper. Three months after that, Williams was still cool on Cooper, stating, “I mean he’s playing OK, I guess.” But a month later things began thawing out (“We are working on our relationship and hopefully we can build a trust and a relationship that goes beyond professionalism. Maybe we could hang out a couple times during the year or in a couple weeks”). That’s OK, because he still found time to be pissed at Bruce Arians (called him a crybaby). He also got benched during the Vikings game, got pissed because he had to watch some Steelers film in a defensive meeting (“I hate Pittsburgh, to be honest with you”), and made a key offensive play call in the snow game against the Lions (“You don’t get a head coach or a defensive player telling a head coach, ‘Hey, this is a great possibility if we run this particular route.’ But Chip believed in me, and it’s crazy”).

He played some OK football for most of the season, and last night he played some great football. He covered Terrence Williams and Dez Bryant like a blanket and when the season was on the line and Kyle Orton (a.k.a. The Boilermaker a.k.a. Late-Period Val Kilmer) was staring down the Eagles defense, as the Cowboys tried to go for two to tie the game, late in the fourth quarter. Everybody in the stadium knew they were going to Dez, save maybe Jason Witten, and when they did, Cary Williams was there to say, “These are the sconces I have chosen.”

Appreciating and/or Praying for Jason Witten

Sharp: Almost anytime someone brings up to Jason Witten it’s to talk about how underappreciated he is on the Cowboys. People say this so often during Dallas games that I’m not sure it’s possible for him to actually be underappreciated.

Sunday afternoon was Tony Gonzalez’s last game, and plenty of people saw the end of his career as “sad” because he deserved a better ending than what he got in Atlanta this year.

Later on Sunday, Jason Witten limped off the field during the middle of the third quarter, and I realized that this happens almost every game. It feels like Witten has played the last five years this way, hobbling on and off the field but somehow making huge plays in the meantime. He’s the most consistent player the Cowboys have had in 15 years. When it’s over, he’ll go to the Hall of Fame, and people will give him all the same praise he’s gotten for the past decade, and even rival fans will pay their respect. He’s not underappreciated. But if it was sad seeing Tony Gonzalez stuck with the Falcons this year, watching another Cowboys season get pissed away last night made me a little sad for Witten, too. These Cowboys endings have been his life for a decade now. Isn’t that worse than Tony Gonzalez? It feels worse. Anyway, Witten finished with 12 catches for 135 yards Sunday night. Win or lose, Jason Witten’s always awesome. But we all knew that.

Kyle Orton Is a Rorschach Test

Sharp: One other highlight from the Orton Era: searching Twitter after three hours of Kyle Orton in HD on national television.

Kyle Orton looks like the type of dude who’d wear jorts under his uniform instead of a jock.

Kyle Orton looks like the guy talking to himself at the laundromat on Christmas Eve.

Kyle Orton looks like the bad guy in Money Train

For the record, he looks nothing like the bad guy from Money Train, but there’s never a bad time for a Money Train reference.

Ryan: When the Eagles put up the plate of spaghetti with clams, Chief Keef, and Wesley Snipes combo of play cards, that means they’re doing this.

The Definition Of Insanity

Sharp: Nope. Can’t be real. Not a chance.

Jason Garrett’s not a bad coach, but he’s not good, either. We have enough evidence here. He’s the thinking man’s Wade Phillips.

Nothing makes it look dumber to be a sports fan than people like Jerry Jones having the power to control your happiness.

But here we go. One more year. #OURTIME.

Can the Cowboys lose four Week 17 play-in games in a row?

Ryan: As an Eagles fan, one of the most unexpected pleasures of this season has been the emergence of the most fearsome running attack in the NFL. My childhood was full of terrible memories of watching everyone from Joe Morris to Emmitt Smith trample the Philly defense and eat up the clock, all while Bryan Westbrook caught screen pass after Andy Reid screen pass, and got treated like the invisible man come the fourth quarter.

I didn’t expect things to change under Chip Kelly. I expected him to move the ball from one end of the field to the other, into the end zone, as quickly as possible. I expected our defense to be a bunch of Grail Knights praying for death in a cave somewhere, due to the amount of time spent on the field.

Well, imagine my delirious pleasure at watching the Eagles run game become a thing over the course of the season. And imagine my ecstasy as the Chip conducted an 11-play, nine-run, 60-yard, fourth-quarter drive that lasted more than five minutes and put the Eagles up. Three yards and a pile of dust. Exactly what we all thought Chip Kelly was bringing to the NFC East.