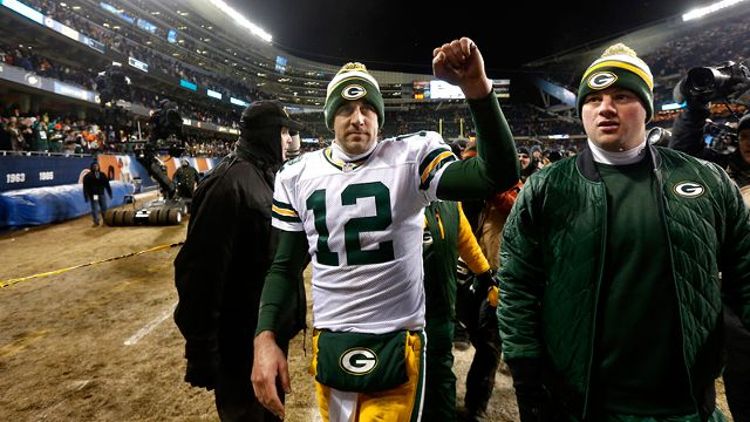 Packers: Aaron Rodgers wasn’t particularly Aaron Rodgers–like, Eddie Lacy looked hobbled, the Packers’ defense continued its horrendous stretch, and Green Bay still went into Chicago and won. After the game, Rodgers said it was great to be back, and at Soldier Field, no less.

He enjoys going on the road in one of the oldest rivalries in sports, and why not? Rodgers has owned the Bears to the point that everything up to the soul-crushing throw to Randall Cobb felt like a formality. The two picks — including a Jay Cutler–esque one in the red zone — and the few badly thrown balls weren’t typical Rodgers, but he did more than enough when it counted.

There were some folks on Twitter yesterday who seemed very serious that San Francisco’s decision to go for the win against Arizona, which means a trip to Green Bay next week instead of to Philadelphia, was the wrong one. The Eagles have been the better team all year, but if Rodgers really does make a 7.5-point difference in every game (the line flipped from Bears -4.5 to Packers -3 when it was announced that he would play), Green Bay’s season looks a lot different.

The Packers are still horribly flawed and trot out a defense that’s been equal parts decimated by injury and unwatchable, but no team wants to see that offense now that it’s back close to full strength. This may be the pain of a Bears fan taking over, but I’m not sure there’s a more terrifying guy to have on the other sideline than Rodgers. And now the NFC has to deal with him for at least one more week.

Chargers: They needed some help — from the Bengals, from the Jets, from the officials, and from Ryan Succop — but the Chargers are the winners of that AFC 6-seed scenario no one really understood. That everything broke San Diego’s way yesterday and it still needed a few minor miracles to beat the Triple-A Chiefs may be reason enough to believe that a playoff trip won’t mean much, but of all the teams vying for that final spot, the Chargers really did have the most compelling case.

San Diego has wins over three of the other five AFC playoff teams — including one over the actual Chiefs back in November — and it actually made it a game against first-round opponent Cincinnati earlier this month. Coming into yesterday, San Diego was 13th in DVOA compared to 15th for Pittsburgh, 19th for Miami, and 23rd for Baltimore. And the Chargers’ offense is the best single unit from any of the four teams. The Chargers may not beat the Bengals, but there’s certainly a chance.

Either way, it’s a nice reward for a quietly impressive first season for Mike McCoy, who continues to prove he can make it work with just about any quarterback. In the past three seasons, McCoy has overseen offenses led by Tim Tebow, Peyton Manning, and Philip Rivers. All three teams have gone to the playoffs. McCoy said before the season began that he expected Rivers to complete 70 percent of his passes, and people laughed. In the end, they were right; going 22-of-33 yesterday, Rivers ended the year at 69.5 percent. He also threw for 32 touchdowns and almost 4,500 yards and is making a well-deserved trip to the Pro Bowl. With a bad defense decimated by injury, McCoy, Rivers, and that offense still put together a first season anyone should be impressed with.

Four offensive touches, 85 yards, and two touchdowns that were the only points Minnesota managed all game. That makes it five consecutive weeks that Patterson has gotten in the end zone for the Vikings, and that touchdown run may have finally been enough to seal his “Player Everyone Is Going to Be Too Excited About in Every Fantasy Draft” title next summer. He earned it.

Rex Ryan: It feels like Black Monday may get especially gruesome this year, but we already know that Ryan is safe. The news reportedly was given to Ryan earlier this weekend, so a win that kept Miami out of the playoffs was just a bonus.

The Jets’ offense is a complete disaster, but that’s not all Ryan’s fault. This is a team lacking a single real difference-maker on that side of the ball. Few coaches could go 8-8 with this team, and fewer could take a defense featuring no stars outside of the defensive line and turn it into one of the 10 best units in the league. Plus, we’re all better off when Rex Ryan is a head coach in the NFL.

Panthers: Without a botched snap from the Falcons on their final drive, it’s very possible we’re talking about Carolina putting up a Week 17 dud and losing out on a bye just one week after the franchise’s biggest win in almost a decade.

Luckily, a center got confused, and we only have to worry about Cam Newton fist-bumping adorable children and Greg Hardy continuing his season of dominance (another four sacks and eight hits on the quarterback yesterday).

Texans: Houston’s loss yesterday guaranteed it the first overall pick, so it wasn’t the game or its performance that was bad. It was every quote that came out of the locker room when the game was done.

Andre Johnson "I'm glad what we went through is over. I wouldn't wish a season like this on anybody."

#Texans' J.J. Watt: "It's the most frustrating season I've ever personally been a part of." #NFL

Duane Brown: "I want to erase this season from my memory. It's been a nightmare all-season long."

Joe Flacco: The Ravens averaged 3.8 yards per pass yesterday, which, on the bright side, is 0.7 yards more than they managed on run plays this year! Baltimore’s offense should have come with a disclaimer this season, and yesterday may have been the low point in a year with nothing but.

Flacco had to throw 50 times for his 192 yards, and Ray Rice continued the stellar run-into-the-line-and-fall-down work he has done all year. It turns out that trading Anquan Boldin, losing Dennis Pitta for most of the season, and getting considerably worse play from an offensive line have negative effects on a team’s offense. No worries, though. Flacco has about five years and $100 million more to turn this around.

Rob Chudzinski: A few people in Cleveland apparently decided waiting until Black Monday was a little too long, so the rumblings about Chudzinski’s firing started yesterday morning and ended with Chris Mortensen’s report yesterday afternoon:

Rob Chudzinski will be fired by the #Browns, per league sources.

Pro Football Talk noted that the firing makes Chudzinski just the 14th coach in the past 30 years to be fired after his first season. It happened last year with Mike Mularkey, but that also came after changes in both the front office and ownership. The Browns cited a lack of improvement in the second half of the season as the reason for the move, but a quarterback tandem of Jason Campbell and Brandon Weeden doesn’t exactly lend to a lot of improvement. Cleveland’s season came off the rails when it lost Brian Hoyer — a 28-year-old quarterback on his fourth team. That’s the state of the Browns right now.

Reports have already started to come out about Cleveland’s disapproval in the job Chudzinski did this year and the lack of accountability demanded of players, and we’re sure to learn more as both sides try to get their stories out in different ways over the next few days. No matter how it actually gets settled, nothing will make it any easier on Browns fans today. Now a franchise without a quarterback is again without a head coach. Since Bill Belichick left Cleveland, the Browns have had seven head coaches. Their combined record sits at 77-163.

Dolphins: Miami got the break it needed yesterday with Baltimore losing to the Bengals, and it still didn’t matter. After beating the Patriots at home to take the inside track for the final wild-card spot in the AFC, the Dolphins dropped back-to-back games against the Bills and Jets and will now enjoy next weekend on the golf courses of North America.

Ryan Tannehill’s three-interception game was probably his worst of the season, and there’s a chance he still hadn’t emotionally recovered from the beating he took against the Bills a week ago. Losing Brian Hartline early in the game certainly didn’t help, but I’m not sure it would have mattered. This is a Miami team with a lot of problems, and the late-season mini-collapse may be enough to bring about some changes.

I asked Dolphins owner Stephen Ross about keeping or firing anyone: "We're going to look at everything."

Tannehill’s development and the job Joe Philbin has done are probably enough to keep him safe, but this was another offseason of curious decisions by Jeff Ireland and the Dolphins’ front office. Brent Grimes turned out to be something of a steal, but Miami’s other big moves included a huge-money deal for Mike Wallace, a big contract for below-average linebacker Dannell Ellerbe, and trading up in the draft to pick a guy who happens to play the one position where the Dolphins are already deep. All of that is enough to leave holes elsewhere (offensive line, the defensive backfield), and those holes were glaring over the course of the year.

Chris Conte: The central part of the Bears’ defensive collapse this year is how they played against the run, but Conte will forever be its symbol. I can’t remember the last time a Chicago athlete was loathed like the Bears safety is now, independent of how much that person gets paid. Major Wright hasn’t been much better opposite Conte, but it seems that whenever there’s a particularly embarrassing mishap to be had, Conte winds up right in the middle of it.

Whether it’s a horrendous pass interference penalty in the end zone, or a horrible missed tackle in the open field, or biting on a route in the flat while Cobb streaks down the seam for a season-ending touchdown, Conte was there this season. The Bears’ offense played well enough to win yesterday, but as soon as Green Bay converted its second of three fourth downs on that final drive yesterday, it was clear that Chicago was setting up to lose this game in the most devastating way possible. We will never forget you, Chris Conte. Thanks for the memories.