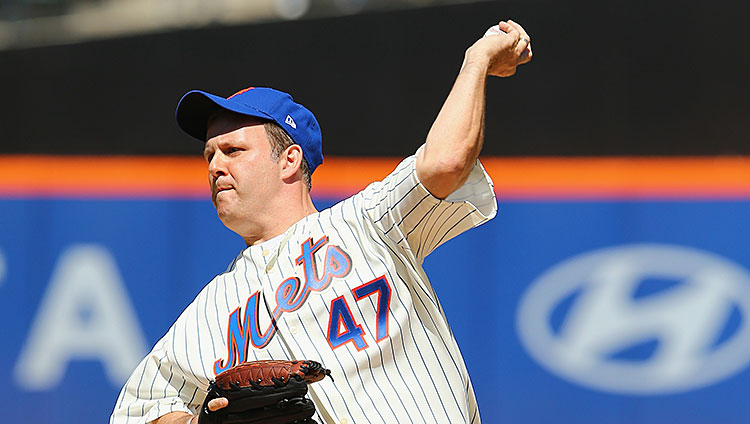 I’m not ashamed to say I cried for two straight days in the spring of 1982, when my favorite Mets player, Lee Mazzilli, was traded to the Texas Rangers.

I’m not ashamed to say that, rather than treat a potentially strangulated hernia, I chose to attend Games 3, 4, and 5 of the 2000 World Series. My cousin Jimmy laughed as I urinated all over myself, and the unfortunate dude next to me, at a Shea Stadium urinal. If the Mets were playing the Yankees for baseball’s grand prize, I had to see it. (Note: I didn’t actually see it end. As soon as I saw Bernie Williams circle under Mike Piazza’s deep fly, I tore out of Shea, becoming the first loser on the 7 train. Because if you don’t see the final out, the whole thing didn’t happen, right?)

I’m not ashamed to say that, as a teenager, I spent countless hours stalking legendary former Mets infielder Buddy Harrelson, outside a batting cage he owned in my neighborhood.

OK, maybe that one I’m a little ashamed of. But, as you can see, throwing out the first pitch before a Mets home game was kind of a big deal in my life. That’s why, back in June, after making plans to be in NYC for eight days at the end of the summer, I gave my agent, James “Baby Doll” Dixon — who claims to have strong ties to Citi Field brass — a call.

Me: Baby Doll, I’m looking at the schedule and the Mets are home seven of the eight days I’m in New York.

Baby Doll: Yeah, so what? Do you want to go to one of the games, baby?

Me: Actually, baby, I want to see if you can get me to throw out the first pitch before one of those games.

Baby Doll: And what am I supposed to tell them when they say, “Sal who?” I’m kidding. I’m kidding, baby.

Baby Doll ends many of his biting proclamations with “I’m kidding. I’m kidding.” But deep down, those around him know he’s not kidding … either time.

I have no delusions that I’m anything higher than a W-, maybe V-list celebrity. But I also know that the Mets play 81 home games and Jerry Seinfeld probably isn’t available to throw out the first pitch before every one of them.

As I see it, my celebrity Mets fan Klout score puts me firmly in between Snooki and Mr. Met’s stepbrother.

But for this to happen, I needed Baby Doll to come through. So I pulled out the big guns.

Me: Sorry, baby. I thought you said you had some pull with the Mets organization. I guess that’s not the case.

Baby Doll: [Pause as he inhales a Marlboro Red and a Dunkin’ Donuts small coffee at the same time.] Let me see what I can do, baby.

One surefire way to motivate Baby Doll is to take his braggadocio to task. My suggesting he wasn’t as big a shot as he claimed was devastating to him. It was reminiscent of the scenes in Back to the Future when Biff calls Marty McFly a chicken. That sort of thing forces Baby Doll to spring into action.

So I put it out there, and sure enough, about a week later, he called with good news. The Mets had put me on the docket to throw out the first pitch on Monday, August 18, versus the Cubs.

It turns out I’m a lot more famous than I thought. Either that or my cousin Jimmy agreed to replay the fiasco on his show for nearly three million people, the night we got back from hiatus. Either way, it was happening and I was very excited. Throwing out the first pitch was all I could think about for the next two months. But I had to figure out a plan. Just throwing it was boring. I needed to make a splash somehow.

I narrowed it down to a handful of scenarios:

A. Attempt to pick off an imaginary runner at first base and toss the ball into the stands. Funny enough. But I’m not sure anyone would know what the hell was going on.

B. Never throw the ball. Instead, shake off the catcher until some douche bag in a headset forcibly removes me from the mound. In my mind, a Bad News Bears/“Let them play!” moment would ensue; but in reality, the result would probably be lackluster.

C. Walk out with a prosthetic arm, throw the ball, let the prosthetic arm fly into foul territory, and writhe in pain on the mound. This had great comedic potential, but it was surely in bad taste. Besides, I had already experienced the devastation of Bill Parcells allegedly telling Cowboys personnel that I wasn’t permitted to attend Dallas Cowboys training camp (thanks to a Media Day prank for which I dressed like and pretended to be Carolina Panthers kicker John Kasay), so I couldn’t risk having my favorite baseball team write me off as well.

D. Really give it a try. Throw it, and then follow the pitch with a celebration mimicking Mets closer Jesse Orosco after striking out Marty Barrett to end the 1986 World Series.

D!!! That was it. The truth is, I really wanted to try throw the ball and throw it well. Not to mention, a wild post-pitch celebration excuses a horrible toss. If I ended up pulling a 50 Cent/Baba Booey, I could convince everyone it was intentional, so long as I followed it with foolish jubilation.

The plan was in place. I had a lot of help preparing.

To loosen my arm, my cousin Jonathan, an excellent high school/college baseball player/musical theater enthusiast in his own right, bought me a heavy baseball (nine ounces instead of the 5.25-ounce official Major League baseball).

I received an avalanche of advice. My childhood friend Louis, whom I once traded a Lou Piniella autograph for a Mets team trading card (my father is still backhanding me in the face for that one), said to remember just two things: “Take it and throw it.”

My friend Darren, who somehow coaches every single sport at my former high school (and even invents some), said, “Whatever you do, don’t aim it.”

My buddy Joey urged me not to shit myself.

All sound advice. Now I just had to go out there and do it. The only thing I knew for sure was that I was throwing it from the mound, not in front of it. I’m a grown man, not Babe Ruth’s 94-year-old sister.

Also, I wasn’t going to lob it in, forcing the catcher out of his crouch for a ho-hum throw. I was going to throw as hard as I could. This was never going to happen again, so I needed to make it count.

So, now it’s the day of the event. In my mind, a crowd of 35,000, waiting with bated breath to see me perform. But when I took the field, I looked up to see about 600 people filing into the stands. Many of them were kids from a summer camp. At around 12 years old, none of them would be familiar with Jesse Orosco’s celebration. I was off to a great start.

A few minutes before showtime, I got to meet backup Mets catcher Anthony Recker, who would be on the receiving end of my pitch. I feel bad for the second-string backstop. For the most part, catching one ceremonial toss from dopes like me is the biggest part of this poor bastard’s day.

Much to my surprise, Recker was built like a Norse god. Worse yet, he was wearing camouflage for Military Monday — a promotion where the Mets thank our servicemen and women. All of a sudden, this seemed much more important. I felt like I was going to war with Thor.

Luckily, I didn’t have a chance to think about it. The public address announcer introduced me to the crowd, wisely avoiding my last name altogether: “Cousin Sal from Jimmy Kimmel Live!” I gave the obligatory tip of the cap to the dozens who were actually pretending to be interested in this spectacle.

I got settled on the mound. Took a deep breath. And although he hadn’t given me even one signal, I shook Recker off five times before agreeing on a pitch. I reared back and fired. The ball crossed the plate low and bounced into his glove.

I immediately switched gears into celebration mode, jumping higher than I’ve ever jumped, pounding the mound with my fists, and then I took off, meeting Recker halfway between the mound and the plate, jumping into his arms. Kudos to him for carrying my fat ass for what seemed like eternity but was probably only three quarters of a second.

Luckily, Baby Doll was able to capture the blessed event. I recommend taking a Dramamine or two before viewing his award-winning sideways iPhone cinematography. To be fair to him, it’s hard to record while juggling a pack of cigarettes, three phones, bronzing cream, and a bottle of cologne.

My favorite part was how supportive Baby Doll was of me after the fact.

“What are you worried about? It was definitely a strike, baby.”

But if you listen to his conversation with my father on the video, he’s clearly disappointed with the pitch. That’s what makes him the best agent in Hollywood/Manhasset-adjacent.

If I had to, I would I rate the pitch a 7 on a scale of 1 to 10. I threw with respectable velocity (some stupid app says 51 mph). I didn’t quite reach the catcher’s mitt, but it still crossed the plate. Low and a tiny bit outside. A pitch almost every right-handed-hitting 2014 Met would have swung on and fanned at.

It was over. Such a relief. All that was left to do was to take a group picture with the friends and family who were good enough to support me. While about two dozen of us posed for the not-so-thrilled Shake Shack employee who had to wait for us to get our shit together, my 9-year-old son Archie turned to me and said, “Just think, Dad, all these people came out here to see you bounce a pitch to the catcher.”

I chuckled and then quickly informed him that comments like those were the reason I would always love his two brothers more than him.