20 Seconds With the President 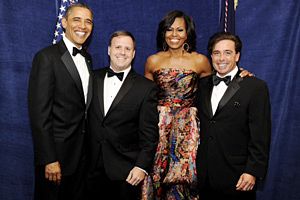 Suppose you were given the opportunity to spend 20 seconds with the President of the United States. Just you and him. A few of his handlers watching from a short distance, of course — provided they weren’t preoccupied with South American vixens. But your conversation is otherwise private. What would you say to him? Recently I was presented with this dilemma.

This past weekend, my cousin Jimmy Kimmel was given the once-in-a-lifetime, super-cool gig of roasting the president at The White House Correspondents’ Dinner. In my totally biased opinion, he did a terrific job.

He did an even better job coordinating his entourage. Jimmy traveled to D.C. with 14 friends/relatives/publicists/agents. He made Jay-Z look like a recluse. I like to think of him as Jay K. I was lucky and related enough to be asked to be one of the “pluses.”

Early on we were told that we would get to meet the president and his wife. All week I thought, What am I going to say to him? I’ll probably have about 20 seconds. Enough time to tell him what an honor it was — to shake his hand and to take a picture with a few seconds to spare. But what would I say to fill the gap to keep it from getting uncomfortable? Or maybe I could somehow make it more uncomfortable? So much to consider.

Perhaps there was something I had in common that would interest the president?

“Hey — you and I both had North Carolina winning our brackets. Tough one, huh?”

That’s stupid. Why would he care? Only 40 million other schmucks like me can make that claim.

What if I tried to make him laugh?

“I TiVo’d your appearance on The View last year. Still haven’t watched it. Please don’t tell me what happens.”

Meh. That could go either way. He might get it. Probably just think I was a weirdo.

I didn’t want to blow this opportunity. It would be wise to give this one some thought.

Flash forward to the big night. About an hour before the dinner, Jimmy’s entourage is escorted across the Hilton Hotel through a comical maze of security stops. It was the equivalent of walking through 15 airports at once without a whiff of a Cinnabon.

Finally — after several important people telling us we’re not supposed to be wherever we are — our entourage is led into a room full of friends and relatives of everyone appearing on the dais or about to receive an award that night. About 75 people total. We’re told that the president and Mrs. Obama will be joining us in a half-hour. We’ll have one shot at a picture — either alone, or in a large or small group.

So here we are. Thirty minutes remaining and I still haven’t figured out what to say. My friend Daniel is part of Jimmy’s entourage. Daniel is responsible for producing some watershed moments in late-night television. Some pretty crappy ones, too, but all in all he is a master manipulator in television and in real life.

Before last Saturday night, Daniel’s claim to fame as a producer was convincing Drew Barrymore during her 1995 Late Night appearance to flash David Letterman on his birthday.

This night — he would top that feat.

Daniel: Why don’t you take your picture with Baby Doll and tell Obama that he didn’t vote for him?

Baby Doll is James “Baby Doll” Dixon. He’s a tough-talking, tougher-smoking talent agent who represents, among others, me, Jimmy, Daniel, Adam Carolla, Sportsish Guy Simmons, and Stephen Colbert. Although no one would ever know it, because the only client he mentions in important company is Jon Stewart.

He’s a no-nonsense guy who is all nonsense. He owes his life to William Morris and his death to Philip Morris.

Anyway, we nicknamed him “Baby Doll” because he calls everyone else “Baby Doll.” And I mean everyone.

He’s one of the greatest characters I’ve ever come across. More important, he is probably my biggest prank target on the planet.

Years ago, when Baby Doll was bragging about how expensive his sunglasses were to a bunch of ABC affiliates while driving through Atlanta, I took the glasses right off his face and tossed them out the sunroof.

Once we were at a big meeting where a soda company attempted to woo my cousin Jimmy and convince him to become their next spokesman. As Baby Doll started to nod off, I chucked a bottle cap and hit him directly in the forehead. He called me a dick in front of a dozen suits as they stopped their PowerPoint presentation to witness the ensuing ridiculous back-and-forth.

Whenever he’s in town to take his clients out to eat, I’ll secretly arrange for the waiter to add a to-go lobster or two. Just to pad the bill. And God forbid the restaurant sells T-shirts. Thanks to me, and Baby Doll’s black AmEx card, everyone (including the busboys) goes home wearing one.

After each of these, and countless other scenarios, Baby Doll gives me a Joe Pesci/Goodfellas-esque tongue-lashing only to forgive me later on.

So you can see that convincing Baby Doll to forfeit his solo picture with the Obamas to take one with me was going to be a tall order. But I had to give it a try.

I knew if I convinced him and he had time to think about it he would change his mind, so I waited until we were about third in line to meet the Obamas. I approached Baby Doll and, utilizing my most deadpan hidden-camera acting abilities:

Baby Doll: Sure, Baby Doll — what is it?

Me: It would be an honor for me to take a picture with you and the president.

Baby Doll: Fuck that, Baby — I’m not wasting the picture. You’re just gonna do something stupid.

Me: No, Baby, really. I would love nothing more than to have a picture of us and the president on my mantle.

Baby Doll: Why, Baby — why can’t you just take one alone?

Me: It would just mean a lot.

Baby Doll: [Hesitating.] All right, Baby Doll — if it means that much to you. But no fucking around.

Me: Of course not. This is the president.

Way easier than I thought. I must’ve caught him during a weak moment. Just a day earlier during the White House tour I had shoved him into the Rose Garden, for God’s sakes. (No, really, I did.) What the hell was he thinking? Who cares what he was thinking.

The truth was, I hadn’t voted for Obama while Baby Doll had. But no one needed to know that. I was all set. Then came our turn …

Me: Hello, Mr. President. Sal Iacono — it’s an honor to meet you.

(I repeat a similar intro to First Lady Michelle Obama. Baby Doll does the same to both.)

Me [to President Obama]: I want you to know I voted for you, but my friend Baby Doll over here didn’t.

[We take the picture.]

President Obama [to Baby Doll]: Well — you still have one more chance.

Michelle [to Baby Doll]: Yes — you still have one more chance.

Baby Doll [Startled — having not heard what I said originally]: Excuse me?

[Everyone now staring at everyone else.]

Baby Doll [Now realizing what has happened]: Oh — don’t listen to this guy, Mr. President. I was the first one in my district at the polling …

Me [ushering Baby Doll away from the Obamas]: You heard them, Baby — you still have one more chance. Let’s leave these people alone now. They’re very busy.

And that was that. Baby and I walked away as the president and Mrs. Obama looked on amused and confused. Mostly confused.

I have to give Baby Doll credit. It took every nicotine-stained fiber of his being to not use the F-word or call me a dick in front of the president and his wife.

In retrospect — I really wish he would have.

NBC Comedy Recap: The Trial of the Greendale Seven