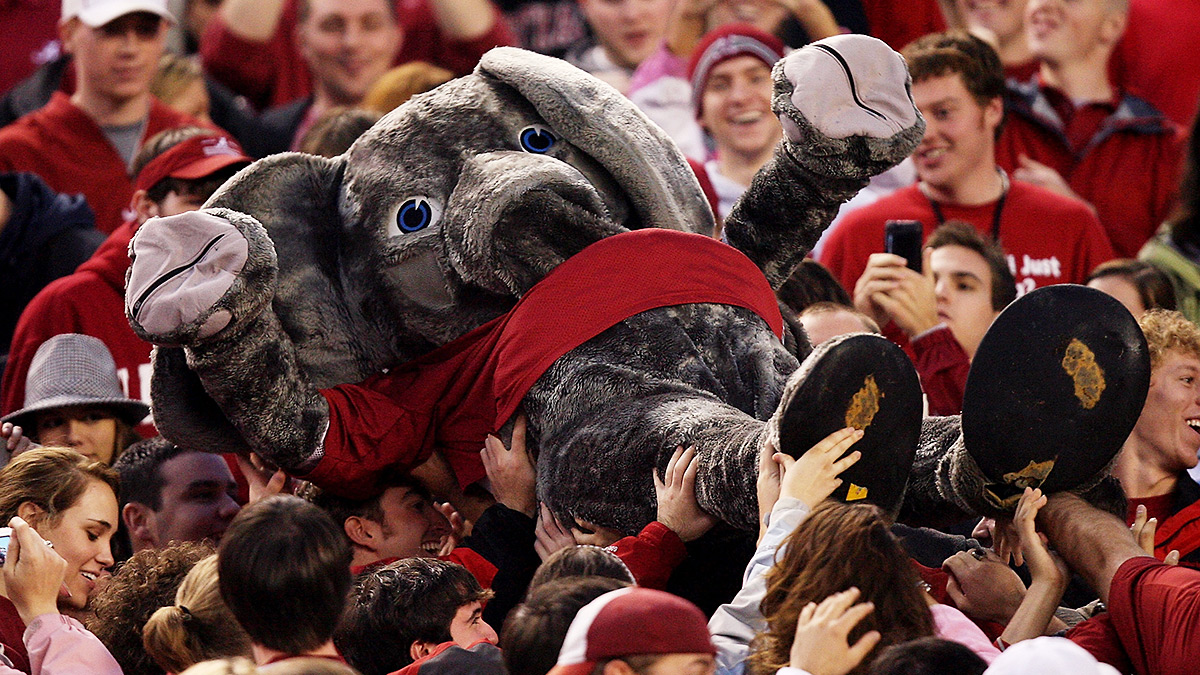 Count ’em: Five (5!) ranked-on-ranked games await your eager eyes and ears this Saturday — games that could make or break playoff bids, rework conference races, and bump squads out of the Top 25 entirely. With the onset of wall-to-wall weeknight games this November, we’ve already seen a flip atop one division following Tuesday night #MACtion.

Friday … see your family? Write your congressperson demanding that pizza be given equal time with chicken during the college football postseason? Or maybe just go to bed early. The implications of Saturday’s action could go completely off the rails. You’ll need your rest.

Your Saturday begins with a brutal contest: a kick taking place pre-noon local time, in temperatures projected to be in the low 20s,1 between ranked Big Ten teams that are pretty smash-bangy to begin with. With no. 8 Ohio State at no. 25 Minnesota (noon, ABC/ESPN3), we are generally interested in seeing how the Gophers perform in the first of several games against steeply upgraded competition (the Buckeyes, the no. 16 Cornhuskers, and the no. 20 Badgers round out their season), and specifically interested in watching OSU O-lineman Patrick Elflein’s innovative false-start reactions. And maybe it’ll snow! Snow game! Snow game!

This isn't the first time #Gophers have helped shovel for prepare a stadium for a game. Here is a pic from 1940! pic.twitter.com/mPzypeAhz3

Also on offer: no. 19 Clemson at no. 22 Georgia Tech (noon, ESPN/WatchESPN), featuring the return of freshman Tigers QB Deshaun Watson2 and a formidable challenge for somebody: The Tigers are allowing an average of 2.67 rushing yards per attempt, while the Jackets, currently riding a 10-game streak of 200-yard rushing games, are averaging 6.1 yards per carry. And down Gainesville way, don’t forget South Carolina at Florida (noon, SECN/WatchESPN), which will offer opportunities for both Will Muschamp and Steve Spurrier to speak into live microphones. So we’ve got that going for us.

Six of the seven teams in the SEC West currently reside in the Top 25, led by these two: no. 1 Mississippi State at no. 5 Alabama (3:30 p.m., CBS). It’s fair to wonder whether freshness will be an issue here; the Tide are coming off a body-blowful overtime win at LSU, while the Bulldogs feasted on UT-Martin in Week 11. (If it feels like we haven’t talked about Clangavania in a while, it’s because MSU hasn’t played a ranked team since October 11.) One specific fresh factor to watch: star Bama runner T.J. Yeldon, who was injured against LSU but is still practicing.

Back in the Big Ten: no. 16 Nebraska at no. 20 Wisconsin (3:30 p.m., ABC/ESPN3), a brand-new rivalry game featuring two good teams, a frankly pretty sweet new trophy, and a terrible, terrible name. WE LOVE FREEDOM. WE LOVE IT. But the great thing about Big Ten rivalry games — apart from the fact that the trophies usually resemble items pried off the wall of a Cracker Barrel — is the specificity. Floyd of Rosedale wouldn’t have such a strong sense of place were he named, say, JUSTICE PIG. Although that is a CBS television program we would watch. Anyway: The Badgers-Huskers series currently stands tied at 4-4.

The Deep South’s Oldest Rivalry resumes with no. 9 Auburn at no. 15 Georgia (7:15 p.m., ESPN/WatchESPN), and we have three words: TODD GURLEY BACK. Last week against Kentucky, Georgia scored first, and so quickly that we didn’t even get to see the beginning of the play as the station switched over from GameDay. This week, the Bulldogs should put up plenty of points on the Tigers, but hoooooweee can Auburn ever score back. Fire! Fire! Fire!

Staying in the SEC: no. 17 LSU at Arkansas (8 p.m., ESPN2/WatchESPN). The Bayou Bengals, straight off a soul-stomping home loss to Bama (and one hell of a dance party), will need every bit of their improved defensive line play to sustain push against the Razorbacks’ ground game. TRIVIA: Did you know this is a trophy game? Not many people do, and it sounds delightfully made-up: “For the 19th consecutive year, LSU and Arkansas will battle for ‘The Boot,’ a 24-karat gold trophy in the shape of the states of Arkansas and Louisiana that resembles a boot.” Also on the rivalry slate: no. 3 Florida State at Miami (8 p.m., ABC), which is somehow not marked as a home game on FSU’s schedule.3

There’s no midnight Hawaii game on tap this week, but there are a few late-night points of interest: San Diego State at Boise State (10:15 p.m., ESPNU/WatchESPN), where the Broncos would fall behind Colorado State and Utah State in the Mountain Division with a loss, and no. 6 Arizona State at Oregon State (10:45 p.m., ESPN/WatchESPN), airing past the bedtime of small children because of high probable gore factor.

That the powerful play goes on, and you may contribute a verse.

What Do We See in Rajon Rondo?