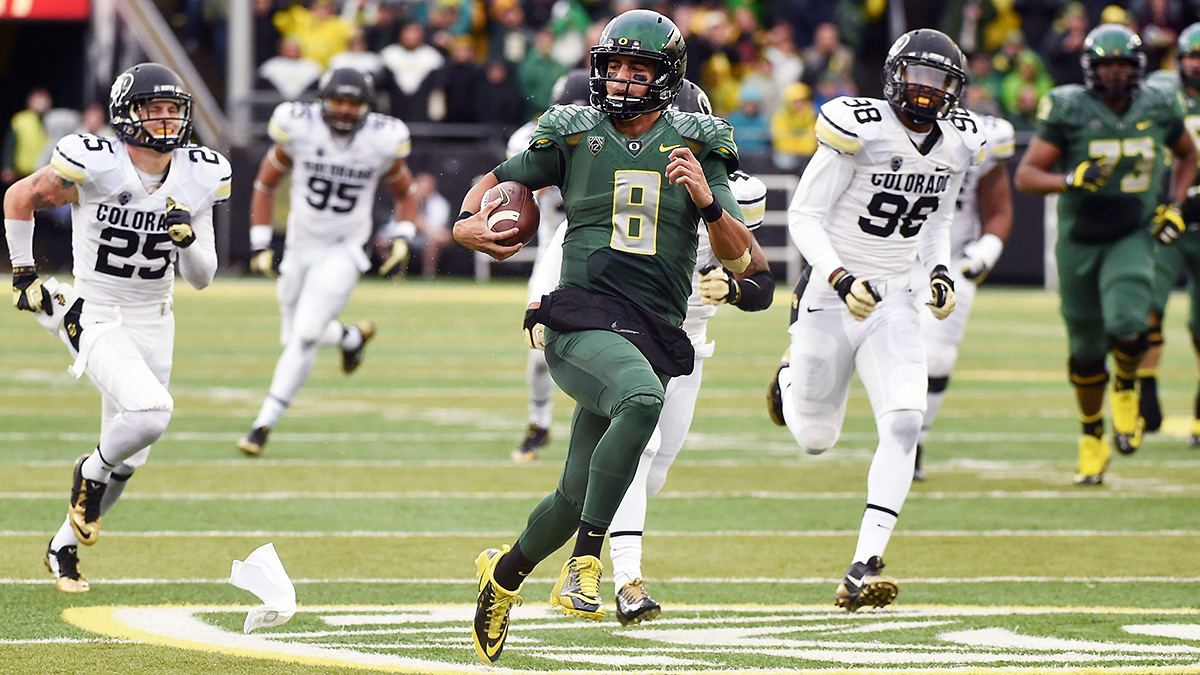 Among Oregon partisans, a popular counterargument to last week’s breathless championing of Melvin Gordon was that estimable Heisman pundits like yours truly should resist the temptation to overvalue Gordon’s record-setting performance against Nebraska at all costs, lest the sports world collapse in on itself from … I don’t know, too much positivity? Twitter user @Pojomofo81 summed this view up nicely:

@Grantland33 @mattborcas Ridiculous! Dont be wowed by the short term that make you jump to irrational conclusions #MariotaForHeisman

@Grantland33 @mattborcas Does a Heisman candidate run for 38 yards on 17 attempts against Western Illinois?

The main issue with this perspective is that it conflates the Heisman Trophy with the increasingly insidious concept of “MVP.” In reality, the absolute best thing about the Heisman is that it represents everything that the MVP and the discussion surrounding the MVP do not. While virtually every other sport fixates on qualities like “value” and “efficiency” without regard for the implications of a world in which athletes behave like robots, it’s comforting that college football’s most iconic award is so wonderfully, shamelessly idiosyncratic. Being the “best” player in a given season is the most important part of the equation, and maintaining that should be a priority.

Of course, Mariota remains the heavy favorite to claim the prize largely because he has been the best. The area in which he’s lacking, relatively speaking, is in generating those especially memorable or electrifying moments. That’s somewhat strange, considering how dynamic Oregon’s offense is. But seriously, the highlight of the dude’s season occurred in a Mark Helfrich press conference, in which Mariota was immortalized along with Jesus and girls as one of the things that actually matter at Eugene’s O’Hara Catholic School. (Just watch the video.)

If Mariota breaks a passing record or does something equally extraordinary against Oregon State, then wins a nail-biter over UCLA in the Pac-12 championship — as he’s already proven he can — he’ll promptly be overqualified for the Heisman. It’s that simple.

In a perfect world, the fact that Gordon’s single-game rushing record lasted for only one week wouldn’t affect his Heisman candidacy in the slightest. Samaje Perine’s 427-yard outing has nothing to do with Gordon’s 408-yard outing, and besides, Gordon’s came on fewer carries (25 compared to Perine’s 34) and against a much better defense (Nebraska compared to Kansas). There’s a strong case to be made that Gordon’s performance was actually more impressive.

All of Grantland’s Heisman Trophy goodness
Alas, our world is aggressively imperfect, and sportswriters are a notoriously fickle species. They’re the ones who get to vote on the Heisman, and I can’t shake the feeling that Gordon will be penalized to some extent for losing his record. While it’s unlikely that voters would ever openly cop to punishing Gordon for circumstances beyond his control, it’s still safe to say that a running back who can claim to be the all-time FBS single-game rushing leader is an exponentially more attractive Heisman candidate than one who can’t. And college football awards are a lot like dating: attractiveness matters.

That said, all is not lost for the Gordon campaign — far from it, actually. On Saturday, he pounded Iowa for 200 yards and two touchdowns (a relatively pedestrian effort by his standards), becoming the most efficient 2,000-yard rusher in FBS history. With Gordon amassing 2,109 yards through 11 games, Barry Sanders’s 2,628-yard single-season rushing record is well within reach, and Gordon must stay on pace to break it in order to win over undecided voters. This would require Wisconsin to reach the Big Ten championship, which means the Badgers need to beat a dangerous, Dilly Bar–fueled Minnesota team this weekend.

The Dropouts: J.T. Barrett, Dak Prescott, and Everyone Else

Tellingly, Bovada’s latest batch of Heisman odds included only Mariota (1/3) and Gordon (2/1), spelling doom for the once promising campaigns of Barrett, Prescott, Ameer Abdullah, Trevone Boykin, Amari Cooper, and others. Indeed, barring monumental collapses from our top two contenders, these other guys are pretty much out of the race, and there’s not much they can do about it. Part of this is a matter of opportunity — for example, with Ole Miss and Auburn both having three losses, the stakes aren’t nearly as high for Prescott’s and Cooper’s rivalry games as they were once expected to be — but most of it has to do with injuries, regression, or, in the case of Jameis Winston, having won the Heisman last year. Let’s hear it for our dearly departed Heisman aspirants, many of whom will be back again next year to vie for the weirdest award in sports.

Messi Money: Who Could Take the World’s Best Player Off of Barcelona’s Hands?