Charlie Strong and Accepting the Unreality of 110 Percent 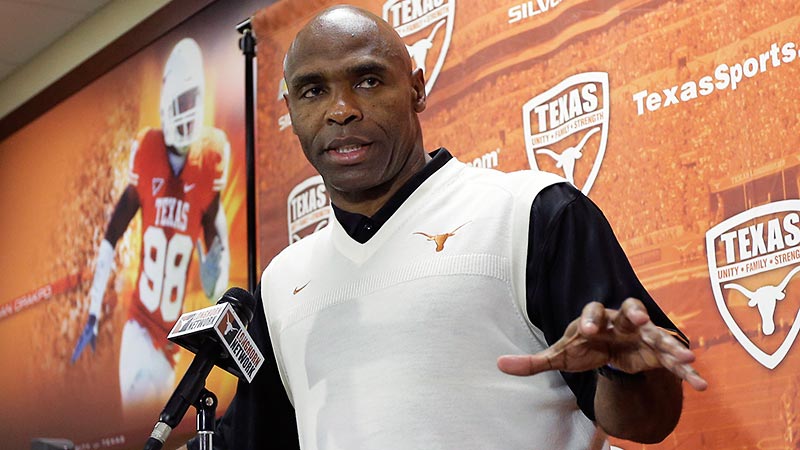 We flinched, actually flinched, when we heard Charlie Strong had the gall to put words to what sounded like an honest opinion about the Texas Longhorns newly placed under his care. Not for what he said or how he said it, but for the backlash that would surely follow. Only, what followed wasn’t that bad. Strong’s statement is being parsed, reasonably in some places, unreasonably in others. And that’s about it. We have yet to hear about any rising tide of radio callers demanding to know why, exactly, a newly hired football coach with some rebuilding work to do has the audacity to admit that his squad has a way to go before hoisting a national championship trophy. It’s surprising, and rare.

After all, would you be surprised to come across just such a FIRE STRONG movement on your radio dial? If you also flinched to hear such unflinching honesty from a coach, would you not just as enthusiastically have rolled your eyes had Strong guaranteed a playoff spot for the Horns in 2014? While Strong sharing his actual thoughts was as admirable as it was unusual given his profession, should he have stopped after the deeply boring and obvious “We have everything available, and I don’t know why we can’t be successful” part? Might the coachspeak sound bite be the most genial possible compromise available? If given the chance to play puppet master for your team’s press conference, what would you really want to hear from the men taking the mic? Do you even know?

This is the climate we’ve created for these coaches. And that’s not even taking into account the players, who are not so cushily compensated for the irritation of having their every word masticated on every available media platform. They tend to err in the opposite direction of sheltered speech, making the news simply for expressing confidence in their own well-documented abilities, getting derided as arrogant for flaunting discrete personality traits, and earning penalties in game situations for openly displaying joy over their successes. With some rare exceptions, saying interesting things doesn’t make these people’s lives any easier. Was this backlash-that-wasn’t a blip, or does it herald a bright new dawn of matter-of-factness?

Either way, we’re about done, or trying to be done, sniping at the odd coach or captain who gets in front of a live microphone and starts winging the we-played-like-a-football-team chestnuts (with the occasional exception for the “physical football” guys, because honestly). The easiest way to get by in these situations is to win, and be boring about it, and can we really begrudge anybody that? Because we’re not so different, you and us and the guys in the branded polos and pleat-front pants. We all just want to get through the day unscathed and get home to our families and our dogs and our Xboxes and our bourbon and our pizza rolls. And that makes us all fellow travelers on the journey to give 110 percent.