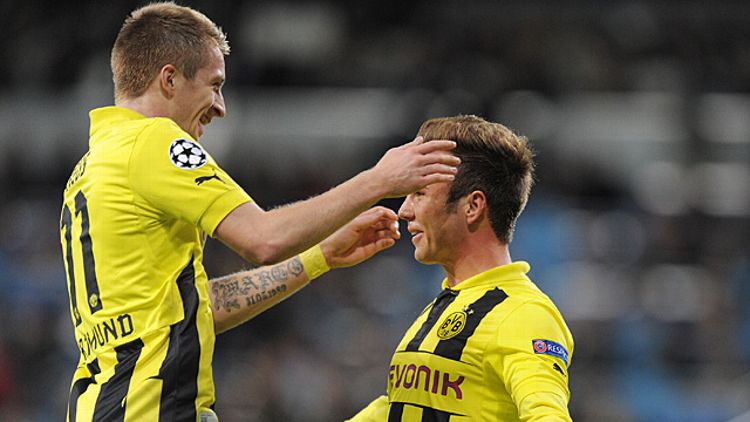 In Joe Posnanski’s recent profile of San Antonio Spurs head coach Gregg Popovich, there’s a quote from Bob Spear, Pop’s old coach from his playing days at Air Force: “A team could do anything as long as the players just kept moving.” The theory is the same in football: create and exploit space through motion, disrupt another team through pressing. Can Borussia Dortmund move enough so as to level themselves with comparably trained sides who also have effectively unlimited bank rolls? Is there room for a working-class Champions League winner in modern football? Or will Real Madrid’s well-funded talent prove to be too much in the Champions League semifinal?

How Did Dortmund Get Here?

The reigning Bundesliga champions were drawn into the Champions League group of death. Faced with the English, Spanish, and Dutch champions, Dortmund cruised through their group undefeated, securing Dortmund nine points at the Westfalenstadion. Dortmund dispatched Shakhtar Donetsk in the Round of 16. Malaga proved a stiffer test for the Germans in the quarterfinals. The first leg of their quarterfinal match with Malaga ended 0-0. Late in the second leg, after a fantastic Malaga goal and some questionable officiating, Malaga was up 2-1.

Then Dortmund did this:

And then Dortmund manager Jurgen Klopp spoke like this:

In an interview with El Pais (translated by the always excellent folks over at Bundesliga Fanatic), Jurgen Klopp spoke to the brand of football he’s interested in playing: “You have to go full throttle. We have called it full-throttle football. We wanted to ooze vitality. We would rather hit the bar five times than not shoot on goal four times. It’s better to lose.” This rare perspective in modern football, that style is substance, is invigorating. Klopp has implemented a system that matches his vision; Dortmund’s style combines constant pressure on the ball with one-touch passing.

Translation is a tricky issue with English and American perception of Klopp. In English interviews Klopp seems to omit entire ideas because it’s not worth slowing down his train of thought to express them. This lends Dortmund’s system an air of magic. But it’s clear that Dortmund’s system is born of rigor when examined. It’s no fun to make a thing that is fun. They put their players in this:

If you’ll bear with me while I, just for a sentence or two, put this matchup into American football terms, Klopp is the Chip Kelly to Jose Mourinho’s Nick Saban. Klopp speaks to wanting to win without amassing the best forces. When asked who the best player in the world is, Klopp grants that it’s Messi before saying, “I am not interested in who is the best but in who makes the most out of their own possibilities. Someone who I really enjoy watching is Swansea’s Michu. Nobody knew him and that’s where the thrill lies. Everyone knows the best and everyone knows who is best. But how is that fascinating?”

Dortmund, at the top of their game, are rapturous. Just watch this touch:

The Best Midfield Duo in the World?

Mario Gotze to Marco Reus to Robert Lewandowski. The above goal, despite the absurdity of Reus’s touch, is textbook Dortmund. Lewandowski gets many of the plaudits; he’s among the best strikers in world football, and is currently riding a 12-match scoring streak in the Bundesliga. But the heart of Dortmund lies in the midfield.

Dortmund’s no. 10, Mario Gotze, is 20 years old. Any discussion of the midfielder needs to begin with, oh my god, he’s 20. His youth seems incongruous with his skill set. Though Gotze has been tagged with the label of “German Messi,” Barcelona’s Xavi seems a more apt comparison. Gotze possesses vision and an elite passing touch. For Klopp’s system to work, intelligent passes have to move among the players without the brain getting too involved. Gotze seems to redirect action outside of time. In attack the ball moves through him on the pitch.

Reus, reacquired this season from Borussia Monchengladbach to replace Shinji Kagawa, is a versatile winger who can also slide centrally. Reus’s pace, close control, and positioning evoke Iniesta in a way that makes the comparison a natural one. While Reus is not as slippery as the Spaniard, he’s similarly versatile, and perhaps more effective playing as a freelancer. Because Dortmund fullback Marcel Schmelzer is comfortable getting forward and providing width, Reus is free to find space all over the field.

Klopp has made it clear both in interviews and in tactical deployment that neutralizing Real Madrid’s Xabi Alonso is his priority. In their group stage matches, Gotze was asked to press hard from his advanced midfield role; his ability to deny Alonso time on the ball left the role of distribution to Madrid’s center backs. Which led to Pepe … well, let’s take a look.

That’s an absolute horror-show interception, and it led to Dortmund’s first goal in their home tie. But it’s not an individual error happening in a vacuum; it’s the manifestation of a tactical exploitation. Madrid is at their most potent when they can move the ball from flank to flank. Alonso is uniquely adept at this from a deep position in their standard formation. If he’s pressured, the ball has to keep going back to players who are less precise, less capable. Pepe’s ball was only a meter off of where Mesut Ozil needed it, but that meter, with Dortmund’s pressure, is death.

The problem with this pressure is that space can open up behind Gotze in Dortmund’s formation. Depending on where Dortmund’s holding midfielders wind up in an attack, this has allowed quality no. 10s room to operate when passing moves break down. Against Schalke, who won both of their matches against Dortmund this season, Julian Draxler consistently had time to operate on the ball. This made Schalke incredibly dangerous as they were able to bring both of their fullbacks forward and use their speed on the wings to create chances. Similarly, in their 1-1 draw at Bayern in December, Dortmund prioritized neutralizing Bastian Schweinsteiger (using Jakub Blaszczykowski to press from the midfield in a slightly different formation), leaving Toni Kroos space in which to work. Kroos responded with a man-of-the-match performance.

Similarly problematic for Dortmund in this fixture is Madrid’s no. 10, Ozil. Let’s take a look at Madrid’s goal from the Champions League group stage match at Dortmund:

OK, that finish is outrageous. But working backward, Sami Khedira is able to dispossess Lewandowski in Dortmund’s third, quickly get the ball to Ozil. The German midfielder has enough space to spot Cristiano Ronaldo’s run, take an extra touch to set up his cross, and then deliver a ball that Ronaldo can one-touch into the net. And sure, no other winger in the world finishes that chance without a second touch (which would likely have given Dortmund time to close down). Unfortunately for Dortmund, this week they are once again up against the one winger able to finish that chance with one touch. For example, against Gala in the last round:

He is sitting on 11 Champions League goals so far, and with Messi battling a muscle injury, Ronaldo is the premier player in the tournament.

Additionally problematic for Dortmund is the questionable fitness of center back Mats Hummels. While Hummels is arguably the best distributor from the position in the world, he has uncharacteristically erred in positioning in big matches. With Die Mannschaft, he was almost single-handedly responsible for their exit from Euro 2012 as he was responsible for critical defensive errors in the run-up to two Italian goals in their semifinal match. Given that he is also fighting through fitness issues, expect Madrid to test his side of the pitch early to see whether a would-be strength proves to be a weakness in this match.

Wait, Is Dortmund an Underdog?

Kind of. With a wage bill one-third that of the remaining teams in the Champions League, they still seem a long shot to win the competition. Their depth does not compare to that of the other three remaining teams. They are currently sitting 20 points behind Bayern (and may have just lost Gotze to Bayern for next season). For Dortmund to win the competition, they would have to stage an epic upset in a final against either Barcelona or Munich.

Against Madrid, though, this tie, despite the financial disparity between the two clubs, should be rather even. While no Dortmund player has the capacity to affect a match the way Ronaldo can, it seems unlikely that Dortmund leaves the first leg of this tie without goals. The interplay of Reus and Gotze, and the scoring form of Lewandowsi, combined with Madrid’s lackluster road form and lack of fitness in defense suggests an open and exciting affair.