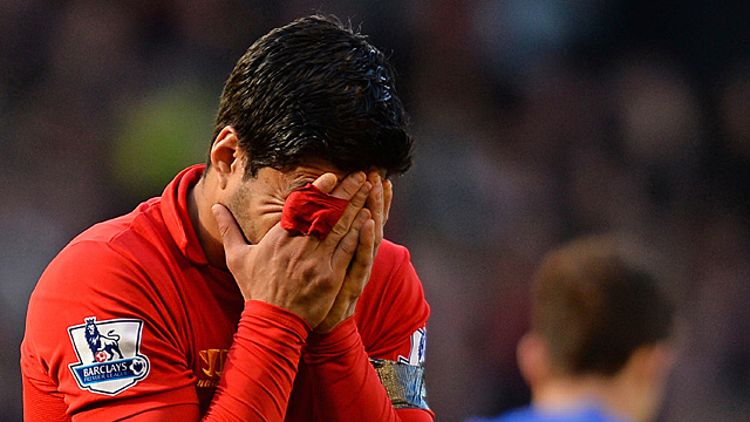 In the seventh minute of stoppage time, Luis Suarez somehow managed to get himself unmarked enough to flick a header past Chelsea keeper Petr Cech. It was the last touch of Sunday’s match between Liverpool and Chelsea and it brought the Reds to a 2-2 tie.

At some level Chelsea only has itself to blame for letting two über-critical points slip in the race for the Premier League’s “fourth-place trophy,” but Suarez shouldn’t have still been on the pitch. That’s because somewhere around the 70th minute, he bit Chelsea’s Branislav Ivanovic. It wasn’t accidental. It was like Suarez had emerged from a Jack London novel and been informed Ivanovic’s triceps was a Kobe rib eye.

It should be noted that Suarez is an adult human being.

If there is a mitigating factor — besides ones dreamed up by nut-job Liverpool fans — it’s that biting in soccer is not without precedent. That mitigation is kind of un-mitigated by the fact that the precedent is also Luis Suarez.

In November 2010, in what would turn out to be his last taste (ahem) of action with Ajax in the Eredivisie, Suarez bit PSV Eindhoven’s Otman Bakkal. Of course, he had a good reason. He was jet-lagged (yet unrepentant): “No, I do not regret what happened. Normally I always keep calm but I didn’t … I’m a little tired. This week I had to travel a lot.” He was banned seven games.

A presumably well-rested Jermain Defoe did bite Javier Mascherano in 2006. And while it’s pretty funny watching Defoe crawl toward Mascherano, it’s worth noting that nothing happened to Defoe for his “tiny bit of contact” (nothing beyond the yellow card he received in the match) whereas Suarez was charged with violent conudct by the FA on Monday.

Given all the violence intrinsic to sport and how easily it spills over outside the bounds of the games themselves in all kinds of ways, it’s kind of surprising there isn’t more biting in sports. Or maybe not. Most humans stop biting each other around the age of 3.

Sports’ most famous bite occurred in 1997 during the rematch between Mike Tyson and Evander Holyfield. Technically, it’s “bites,” and Tyson got a good taste of Holyfield’s right and left ears before the referee Mills Lane stopped the fight at the end of the third round. That’s a long clip of the first three rounds, but notice that, before the start of the third round, Tyson comes out of his corner without his mouthpiece before Lane sends him back to get it.

In April 1983, Tree Rollins of the Atlanta Hawks threw an elbow at Danny Ainge. In the melee that followed, Rollins bit Ainge on the hand. There is actually a bit of similarity to the weekend’s incident in that, like Liverpudlians and Suarez, the only people who didn’t thoroughly enjoy watching Ainge take one to the face lived in Boston. The biting is actually about the least interesting part of the clip. Brent Musburger alludes to the Celtics’ lottery pick, which would turn out be Len Bias, then is left momentarily speechless by a woman who would years later go on Greek TV to smash cans.

If there is any sport which seems to have more than the odd one-off biting incident, it’s ice hockey. But, apparently you can bite people in the NHL (and in the Stanley Cup finals, no less), have it get caught on camera, and still get away with it. Baffling.

That’s Dylan Hartley getting bit. He can’t get too mad (even though that sounds like him yelling, “Fookin’ hell”) because, while playing rugby for England’s national team, Hartley bit Stephen Ferris. But in rugby you can find internationals biting internationals; or if union isn’t your style, there are league players biting league players.

And depending on how much you want to expand biting and sport beyond the confines of the field, there was the Uruguayan rugby team that, after crashing in the Andes, was forced to eat teammates in order to survive back in the early ’70s.

It’s debatable whether there is any actual biting here, although the dog does seem to get a piece of either a player or the ball at around the 1:30 mark. Still, this clip is notable for four reasons: First, Awww … puppy. Second, the referees make zero attempt to stop the game and get the dog off the field for about five whole minutes. Even when there’s a stoppage in play, nobody does anything. That’s odd, right? Third, the wonderful match commentary features the type of good-natured racism that only Australians seem to be able to get away with. Around the 1:50 mark, the play-by-play guy notes that, since the ball came off the dog, it should be the Aussie’s possession, which seems like he’s implying that the Irish are dogs?

Finally, this is Gaelic football, and it’s just weird. The only explanation for it is 30 Irishmen turned up and nobody could remember if they were playing soccer, Aussie rules, or rugby, so they just played them all at once. When your nation’s recognized global stereotype is that of being drunks (and don’t get defensive; your best athletes pour Jack Daniels into their pee), you’re probably excused for your bizarre sports (e.g., Hurling).

Finally, and without commentary, is the above video. And it leads to the only takeaway that I can find. Bitees (and Uruguayan rugby teams) notwithstanding, biting in sports is actually kind of funny regardless of whether it’s humans or animals that are involved. Why it’s funny, that’s harder to discern. As noted earlier, people generally stop biting each other at a very young age. So maybe watching someone under duress regress to something so infantile somehow tickles us; maybe out of recognition that, despite knowing better, we might be capable of the same. I don’t know. I’m not a child psychologist. And Defoe probably had enough time to become conscious of his actions by the time he got to Mascherano and think about what he was going to do. Maybe he just didn’t want to lift his weight off his hands and fall on his face, leaving biting as really his only option.

So maybe there is nothing deeply psychological at work. As Tyson said about the Suarez incident “He bit someone. It happens.”