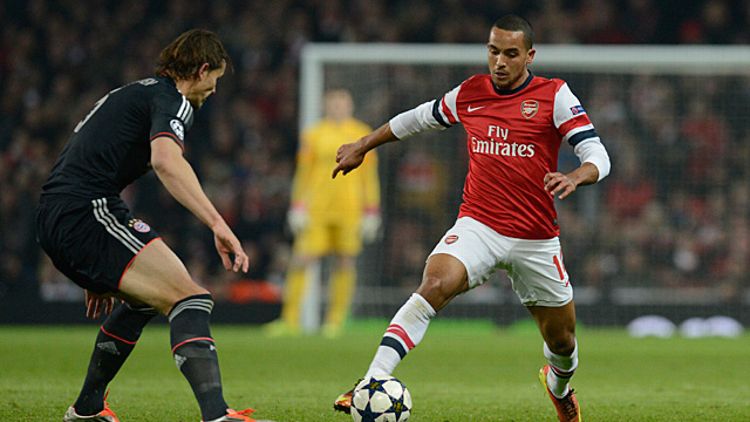 The English Premier League is down to one team in the Champions League. It has been more than 15 years since no English team made the Champions League quarterfinals, but that is the most likely scenario after Tuesday’s matches. Reigning champion Manchester City crashed out of the so-called “group of death,” Chelsea was unable to defend its title, and Manchester United received a very un–Manchester United dose of luck when Nani was given a questionable second-half red card in the second leg of their tie against Real Madrid, allowing the Madristas to storm back from a one-goal deficit and eliminate the Reds. So all that’s left for England is Arsenal. And Arsenal, your Champions League underdog of the week, is in a world of trouble.

How did they get here?

Arsenal qualified for the Champions League with a third-place finish in last year’s Premier League. They finished second in a competitive Group B, behind Schalke 04 and ahead of Olympiakos and Montpellier, securing advancement before the final round of matches.

Then the Gunners drew Bayern Munich. This was not a favorable draw. The Germans have been playing the best football in the world this season and lead the Bundesliga by 20 points. They have a plus-57 goal differential in league. Though Arsenal were not wholly outclassed in their first leg at the Emirates, the 3-1 deficit they face in the return leg is a fair indicator of the gulf between the two sides. With the Champions League road-goal tiebreaker in effect, Arsenal will need to win by three goals if they are to advance to the quarterfinals.

Is there a way back?

History suggests the answer is maybe. Last season Arsenal faced a much stiffer deficit in the Round of 16, falling behind AC Milan 4-0 at the San Siro. Back at the Emirates, Arsenal put in three goals in an electric first half, before tiring late in the game and losing 4-3 on aggregate. That effort, though, was the turning point for Arsenal’s season. The Gunners went on to edge out Tottenham for third place in the final week of the season. The difference between third and fourth was huge, as Chelsea improbably stole the final Champions League spot by winning the competition, beating Bayern in a penalty shootout.

Arsenal’s current form, however, suggests that the answer is no. In order for the North London club to advance, they have to score multiple times and avoid conceding multiple times (this in and of itself might not be enough, but let’s start here). So let’s break down the possibility of both of those things happening:

Arsenal’s offense thrives on possession; in league play, only a recent match away to Chelsea had anything resembling an even split of possession, and in their first leg against Bayern, Arsenal held 58 percent of possession. However, for Arsenal, possession and goal-scoring opportunities have not had a consistent correlative relationship. Looking at Arsenal’s last league match (against Spurs), Arsenal dominated the statistics in terms of passing percentage (82 percent to 73 percent), crosses (23 to 14), corners (7 to 4), and passes completed in the attacking third (104 to 27). Yet the Gunners managed only four shots on target. Some of this has to do with the exceptional current form of Spurs center backs (Jan Vertonghen is playing out his mind), but the bigger issue is finishing.

The most successful Arsenal teams of the Arsene Wenger era have featured ruthless strikers. Arsenal’s attacking approach has been defined (to the point of caricature) as passing until the perfect chance presents itself. Those chances therefore have to be converted. Last year Robin van Persie was the most lethal striker in England (he is this season too, but plays for Manchester United), and before him Thierry Henry was a similar presence for the Gunners. This year Olivier Giroud has been acceptable but unexceptional, and Lukas Podolski (who is a question mark for the match against Munich) has found himself as much a provider as a goal scorer, playing mostly out on the left wing. That has left Theo Walcott to carry much of the scoring burden playing both centrally and wide on the right. Walcott started in the middle against Munich in the first leg, and while he made a number of threatening runs, the delivery to him was inconsistent. When he moved wide later in the match, after Giroud came on, Walcott was able to get on the ball more often, but in less dangerous places on the pitch.

So the question becomes, can Arsenal find a way to get the ball to Walcott in the middle consistently? And the answer is probably not. For all the slickness and quality that Arsenal midfielders Jack Wilshere (who is likely out with an ankle injury) and Santi Cazorla provide, Luiz Gustavo and Javi Martinez form a double pivot that is very difficult to pass through. (Bayern will be without the services of midfielder Bastian Schweinsteiger because of yellow-card accumulation, yet they still have depth for their central midfield if needed, with Anatoliy Tymoshchuk available off the bench.) Does this suggest that Walcott should play on the right, with Giroud center? To exploit that would require catching Munich fullback Philipp Lahm out of position; while this has happened before (I swear), it happens far less often when his team, whether it be Germany or Bayern, is ahead. So, what do you do if you’re Wenger? Um … I don’t know.

Arsenal is a good offensive team, not a great one. And Munich is great defensively. It is unlikely the Bavarians will allow themselves to be vulnerable, and even if they were to concede chances, Manuel Neuer, despite the silly goal he conceded in the first leg, is a world-class shot stopper. Arsenal needs three goals at the Allianz Arena. Bayern has yet to concede three goals in any match all season. If there is hope to be found, it came in the past week, when Bayern conceded two at home for only the second time all season (granted, this was in a match that they won, but we’re looking for rays of sunshine in a Bavarian winter’s sky). Combine that with the absences of Schweinsteiger and center backs Jerome Boateng and Holger Badstuber … um … maybe? Maybe? Maybe Giroud can play the match of his life, Cazorla can get Walcott into space out wide? Maybe? Maybe Arsenal can get another set-play goal or two? It could happen. It probably won’t. But it could.

So, for the sake of argument, let’s say it’s possible that Arsenal can storm into Germany and take three goals, à la their effort at home last season against AC Milan. Can this Arsenal team withstand Bayern’s attack?

Probably not. Arsenal plays a high defensive line when they are going after goals, and this line was destroyed by Spurs in their last match (as Gary Neville broke down better than I possibly could). Now, Munich is unlikely to play through the middle as Spurs did because of their speed out wide (likely to be Thomas Muller and Arjen Robben or Xherdan Shaqiri with Franck Ribery ruled out with injury), but with Mario Mandzukic and Toni Kroos pairing centrally, that option will be on the table for Bayern. Additionally, Nacho Monreal is cup-tied for this match meaning Wenger is forced to play second-tier fullbacks against world-class wingers. Tactically, everything looks bad for the team from North London.

Is there hope for Arsenal?

Well, this is the Champions League. So the answer is yes. When you’re talking about Premier League teams in continental play, you are talking about a recent history full of improbable comebacks. Just last year, Chelsea came back from three goals down in this round to take out Napoli 5-4 on aggregate, en route to an improbable Champions League title. Fulham had been all but eliminated from Europa League action in 2010 down 3-1 to Juventus, before they stormed back to win 5-4 on aggregate. And then there are the big two: Liverpool coming back from three goals down in Istanbul to take the 2005 title over AC Milan in penalty kicks, and Manchester United getting two stoppage-time goals against Bayern Munich to win the 1999 Champions League title.

As a neutral, I do hope Arsenal gets an early goal, mostly because I am interested in seeing what happens when this Munich side gets pushed. This is both the tournament’s prohibitive favorite, and the side that came in second in the Bundesliga, Pokal Cup, and the Champions League last season; their fortitude will remain in question until they have had their backs against the wall and fought their way to a title. Bayern is currently running away with the league, and they have already dispatched their rivals Dortmund in domestic cup action, but the Champions League has too many other good sides for them to advance untested. I see this match finishing 2-1 to the Bavarians on the tactical merits of the two sides, but hopefully the tie gets more interesting than that.