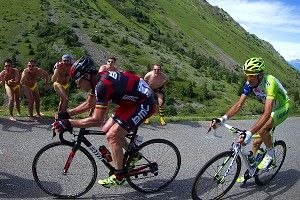 I just spent three straight hours watching a bike race, and it wasn’t done at gunpoint or as part of some blogger’s gimmick. Hey, I’m a football-loving American and I’m going to write about how confusing and hilarious it is to watch a bike race! No. I watched it of my own free will, loved the hell out of it, and still couldn’t tell you exactly why. I’m part confused, part excited, and part annoyed that I didn’t know about this before.

In the absence of baseball, and having no idea what do with myself in the sporting lull, I gave in to a moment of desperation on Monday and turned to cycling. I only caught the very end of Stage 9, but the helicopter shots of the Citadel of Besançon were so incredible that a tiny seed was planted in my mind, and that seed sprouted just enough to compel me to watch Stage 10 Wednesday morning. My attention flickered, but the finish was fantastic (Thomas Voeckler of France won), and I was ready to commit some serious time and attention to today’s race.

Quick, relevant facts about me: I was embarrassingly old before I knew how to ride a bike, and I used to dread the summers between ages 6 and 10 when my mother would yank me away from baseball and force me to “practice.” I don’t know why, but the whole prospect was terrifying — something about the lack of control, and my firm conviction, physical laws be damned, that no amount of forward momentum would be enough to keep me upright. It took years of painful and embarrassing struggle, but I finally had my euphoric moment when I realized that suspending disbelief would do the trick. To this day, though, I still can’t ride with both hands off the bike, which seems like a pretty basic move. I gave it another shot last summer, at age 28, and came so close to crashing that I slammed on the front brake, went up on one wheel, and crushed the tire beneath my weight before crashing to the ground.

Undeterred, I got sort of into road cycling. Please underline that “sort of,” because my “road bike” was actually a hybrid Trek 7.2 FX (cycling people are laughing at me now), and the farthest I ever cycled was 20 miles (cycling people are now doubling over). But I loved it right up until I took a horrendous crash over a manhole cover that tore up my legs and arms. That dampened my enthusiasm, but it’s come roaring back with the summer, and the Tour de France has sped up the process. Still, the point you should take from this quick biography is that I know almost nothing about competitive cycling.

But I’m going to try to describe what happened today, in Stage 11. Cadel Evans, the defending Tour champion, found himself trailing England’s Bradley Wiggins by 1:53 at the start of the race. Not an insurmountable gap by any means, but it was a good day to make a move in the Alps, on the mountainous 92-mile climb from Albertville to Le Toussuire. On the first of the three main ascents, Evans made his move away from Wiggins. “Making a move” is always an exciting event, full of surprise and energy. The rider seems to wait until his opponent glances away, and then breaks into a furious sprint to create a gap. At that point, it’s up to the other riders to let him go and hope to catch him later when he’s tired, or chase him down immediately to stop the advance.

Evans knew he needed to create some space, but Wiggins has a great team — Great Britain’s Team Sky — and at that point all four team members were ready to chase down Evans. A strange fact about cycling is that if one member of a team, like Wiggins, has a shot to win the Tour de France, the rest are essentially his servants, setting the pace, blocking the wind, and sacrificing themselves to keep him in position to maintain his lead throughout the stages. I call that strange because on its face it doesn’t make sense — it’s not like they can ride for him, so how does it help if they’re nearby? Moral encouragement? But apparently pace-setting, drafting, and yes, even being a supportive presence are incredibly critical for the star rider. I’m sure there are a million subtleties I’m missing, but I’m slowly figuring it out.

With his teammates, Wiggins caught Evans by the end of the first summit, a heartbreaking development for the Aussie champ. Meanwhile, a pack of four riders separated themselves from the peloton (the main body) in an attempt to get out front and win. It’s a huge risk to go out early, because you expend large amounts of energy creating a lead without knowing if it will be enough to hold off the late-charging riders who are sure to pursue you mercilessly at the finish. The drama of Stage 11 quickly became apparent — which of these four riders, if any, would be able to hold off Wiggins, Evans, and the rest of the peloton? But for Team Sky, these four riders weren’t overly important, since none were threats to take the overall lead away from Wiggins. Evans was the man to watch.

As it turned out, Evans never made another move, having burned himself out in the lost gamble. But two others, Vincenzo Nibali and Jurgen Van den Broeck, surged ahead on the second climb. Both men were threats to Wiggins, and so Team Sky was compelled to chase them down. Two of the Team Sky members, after setting the pace, lost their legs and dropped away. That left only Wiggins, the leader, and his teammate Chris Froome. At one point on the final ascent, Froome dropped off, and it looked like Wiggins would be left to his own devices. But Froome found his lost energy, got back to the front of the pack, and led Wiggins slowly but surely to the rear wheels of Nabali and Van den Broeck. It seemed, to me, a pretty heroic recovery.

Less heroic was when Froome decided to sprint off on his own a few minutes later, leaving Wiggins in the dust. The announcers were up in arms, and on camera, you could see Froome getting a call on his headset (did I mention that the bikers have headsets?). We’ll never know the exact conversation that took place, but I imagine it was something like, “What the f— are you doing? Get back to Wiggins!” For a brief second, Froome forgot his role, which was to shepherd Wiggins through the race and keep him in the leader’s yellow jersey.

He slowed his pace, and together with Wiggins, Nabali, Van den Broeck, and Thibaut Pinot, they chased down the pack of four leaders. One by one, the quartet fell, their energy spent after an early breakaway. Only Pierre Rolland, a Frenchman, survived the peloton assault. After leading by more than three minutes, Rolland held on over the last grueling climb to win the stage by 55 seconds. Then came Wiggins’s group, finishing second through sixth in a tight pack, with no crucial seconds lost. Led by the incredible Froome, Team Sky held off all challengers and even increased their lead over Evans. The overall race isn’t completely out of reach yet, with Nibali just 2:23 back, but it’s close, and today was a huge step to victory.

So that was the drama in France, and it completely hooked me. The actual racing is about 10 times more fun to watch than I expected, and the gorgeous scenery lends an epic quality that I have trouble resisting. The down side of the whole thing is that there’s a chance every single rider is cheating, which, when I pause to think about it, is a slight bummer. But I’ve been able to ignore that unflattering aspect so far, and I’m enjoying the hell out of a sport I never knew was this good.