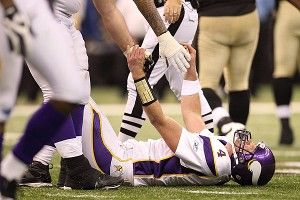 Reaction to the punishments has been diverse and plentiful. Payton is reportedly “not OK.” Quarterback Drew Brees is “speechless.” Williams hasn’t publicly commented on the suspension, but his current boss at the Rams, Jeff Fisher, said he was “shocked.” Some of Williams’s former players, including Steelers defensive back Ryan Clark, have come out in support of the controversial coach.

Players have been, predictably, hitting Twitter pretty hard. Former Buc and Raider and current NFL Network analyst Warren Sapp has accused former Saint Jeremy Shockey of being the “snitch” in this case. Shockey, unsurprisingly, disputed this.

Elsewhere, Quintin Mikell found the lighter side in all of this, while Aaron Curry saw some hypocrisy in the situation. In general, there has been widespread support for the commissioner’s actions, with Tony Dungy coming out strongly in favor of Goodell’s decision.