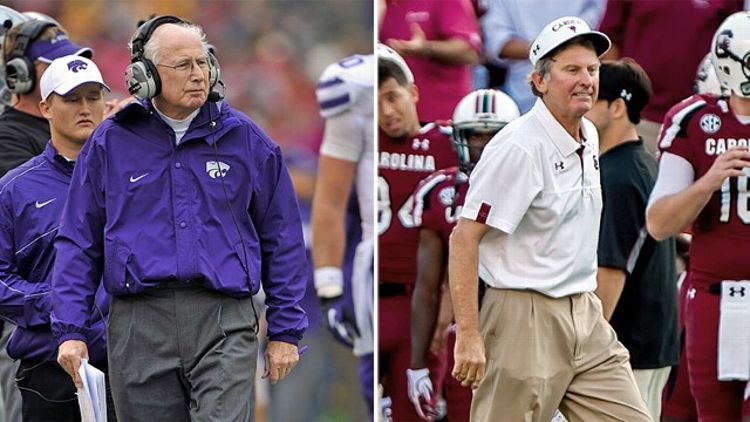 It was about midway through the third quarter of South Carolina’s 35-7 romp over Georgia when Brent Musburger delivered that broadcast’s insurance-company-sponsored trivia question. Accompanied by the scurrying Aflac duck was the question “Who are the three oldest coaches in the FBS?” Most of these somehow involve one of the participating schools or coaches, and this one was no different. Coming in third, at a youthful 67, was the Ol’ Ball Coach. Two spots above him was the only guess I would’ve had. The wizard of Manhattan, Kansas, Bill Snyder, is a distinguished 73. The ages of both left me incredulous, but for opposite reasons. Steve Spurrier is 67? Bill Snyder is only 73?

More surprising than either number is that two of the three oldest major-college football coaches in the country are in charge of two programs firmly inside the top 10. (Oh, and the third is Frank Solich, who has the Ohio Bobcats in the top 25. It’s an old man’s game.) Coaching success late in life isn’t new — Joe Paterno and Bobby Bowden both coached into their 80s — but Snyder and Spurrier differ from the previous slate of coaching elder statesmen in that neither is at the end of an uninterrupted run at a school he helped elevate to national prominence. The final act for both is also their second. This weekend, both Kansas State and South Carolina will have a chance to play for an inside track to the national championship, and the way each team has done it makes neither coach seem his age.

The arc of Snyder’s time in Manhattan has been documented, but here’s the short version. When Snyder arrived in 1989, K-State was, by every possible measure, the worst program in college football. A decade later, they finished the regular season undefeated and spent four weeks as the no. 2 team in the country. Snyder retired as a legend in 2005, and after watching the program sputter for three seasons under Ron Prince, he returned to a stadium named in his honor and within two years returned the Wildcats back to BCS contention.

Snyder’s second act has been much like his first in that it makes absolutely no sense. Some might attribute the turnaround to a new influx of high-caliber recruits looking to play for a legend, but that doesn’t approach reality. The first class following Snyder’s return to Manhattan finished as the nation’s 62nd best, right between South Florida and Rutgers. The year after, it was worse. Last year, following a trip to the Cotton Bowl and a top-15 finish, the Cats had their best haul of the second Snyder era — a 58th-place finish, only six spots behind national power Duke.

What Snyder has assembled is a collection of no-names, junior college transfers and big-program castoffs that all have two things in common &#8212 they know how to play football, and they play for their coach. There is an expectation that Bill Snyder’s players will give him everything, and more than that, they want to. It’s what makes Snyder’s 73 years seem like they’re not enough. Players are drawn to him and seek his approval because his inherent connection to the fundamental aspects of football makes him seem as old as the game itself. What Bill Snyder teaches is ageless, and so is he.

While Snyder seems 10 years older, Spurrier seems 10 years younger. The Gamecocks are fitted with a collection of Under Armour gear that, for 18-year-old stars around the country, makes them one of the coolest teams in college football. Bill Snyder has worn the same Cotton Bowl windbreaker for K-State’s last three games. Spurrier may not be on the recruiting trail like he once was, but there’s still a youthful energy to the program in Columbia that doesn’t feel like it comes from a man two years into his AARP eligibility. South Carolina has become a place elite recruits want to play. Recruiting starts at home, and now for the fourth straight year, South Carolina’s Mr. Football will be headed to Columbia. Those four include Bills first-round pick Stephon Gilmore, Marcus Lattimore, and future top-five selection/force of nature Jadeveon Clowney.

There’s always been a bit of irreverence to Steve Spurrier, and his claim at this year’s SEC Media Days — that his job is “not that stressful” — is only a sign that this hasn’t changed. Spurrier works the hours of someone in a far saner profession, and although it (among other things) did him in as an NFL coach, it’s likely keeping him fresher than he deserves to be as he builds a program with one conference championship into a national contender.

His exuberance is mixed with a bit of insight that comes with a few more years. It’s hard to say whether Spurrier would have been willing 20 years ago to shelve Spurrier Ball in favor of a running-and-defense-based game that better fits his personnel, but that’s just what’s happened in Columbia. The Ol’ Ball Coach is a bit older, but just young enough. Amid talk of knee surgeries and a broken-down body, he’s still liable to drop a “dude” here or there. I’m not sure we’ll get any of those from Bill Snyder. I’m not sure we need to.