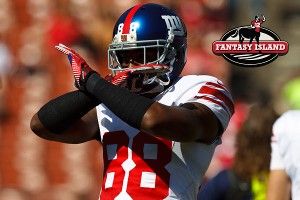 Player to Start: C.J. Spiller
This is a friendly reminder that C.J. Spiller’s upside makes him an every-week start, regardless of your format. Yeah, he might only get 15 touches, but he’s one of a handful of players who can produce something special out of thin air. He’s like David Blaine, expect he doesn’t stare at you awkwardly for three minutes after he’s finished.

RG3 is now in automatic-start territory (how many people didn’t realize this last week and were very sad?), so whoever you drafted as your starter is officially trade bait. You might want to trade whoever that is for someone to replace Hakeem Nicks, who didn’t look right against the 49ers. If he can’t go off this week against the worst secondary in the league, he’s in real trouble. Victor Cruz is the no. 1 WR for me this week, I think Hixon is a flex, and Eli is a top-five start. I’ll say it again — the Redskins have the WORST SECONDARY IN THE LEAGUE.

Curiously, Drew Brees tweeted a picture of himself with boy band One Direction last Saturday night. Let’s examine one of One Direction’s more prominent lyrical sequences to uncover an important fantasy truth about this game:

Brees identifies with the speaker in the opening lines of “What Makes You Beautiful.” Of course, he’s addressing the demure Jimmy Graham, who’s still kinda new to this football thing and just getting over his high school basketball picture. To help remedy Graham’s insecurity, Brees will get him the ball in the red zone this week, a boon for owners of both.

We are a local football team in the Dallas market looking for a new head coach. This is an entry-level position, so even minimal experience is OK. Career third-string quarterbacks, mediocre offensive coordinators, and special teams coaches are especially desirable.

This is a “learn on the job” environment, so if you don’t know what you’re doing, that’s OK. Clock management, offensive strategy, and player development can be taught as you go. What we’re really looking for here is enthusiasm and a willingness to let decisions be made by the owner.

Ready for my bold prediction of the week? The Texans, fresh off an embarrassing loss to the Packers on national television, are going to come out firing at home this weekend. The Ravens, who just lost two of their top defensive players in Lardarius Webb and Ray Lewis, aren’t going to be in a position to stop them. I think Houston is going to steamroll Baltimore to the point that we’re going to see Ben Tate spell Arian Foster rather often, and especially late. In deep leagues, consider Tate as a flex fill-in for someone on a bye.
— Jonathan Bales

Donald Brown is out two to three weeks and was doing an aggressively mediocre job anyway. Former Syracuse star Delone Carter isn’t good. Vick Ballard will tote the ball. Brandon Weeden and Andrew Luck should each get to 300 in a rookie duel that historians will point to when they elaborate on 2012 as the year ace rookie signal callers flooded the market. Trent Richardson’s rib cartilage is jacked up and even though he’s expected to play, it’s a painful injury. If you’re desperate in a PPR league, Chris Ogbonnaya has been a solid third-down back for a few weeks now; look for him to see more default action in the check-down passing game.

It’s always refreshing to watch a game with frustrated wide receivers struggling under subpar quarterbacks. Percy Harvin is quietly having the best season of his career, and Larry Fitzgerald is quietly crying every Sunday drive home.

Harvin has just one touchdown this season, and this drought can’t continue. He’s getting more receptions, and he covers a lot of ground. Somehow, Kyle Rudolph is getting the bulk of the work in the end zone. The law of averages dictates Harvin has to get some touchdowns soon, and against the Cardinals, he probably will.

Alex Green was on the field for virtually every snap in Week 6 for the Packers — he is definitely the RB of choice until he proves he can’t carry the load. Week 6 was a full-on air attack though, and as he typically does, Aaron Rodgers spread it around. Randall Cobb had 100-plus yards, James Jones had two TDs, and Jordy Nelson had 121 yards and three touchdowns all by himself (and OF COURSE, THIS WAS THE WEEK I SAT HIM). It’s obviously too early to say that some switch has flipped and the 2012 Packers are the 2011 Packers again, but you can’t underestimate the power of elevated serotonin in a team that should be WAY better than they’ve been so far this year.

I cut Shonn Greene Sunday morning in the Grantland league and had to endure his three-touchdown performance from afar. Pretty sure lots of other folks did, too. Even with Bilal Powell hurt and Joe McKnight about as useful as the magnifying glass on a pocketknife, the Man With the Mediocre Touches will merely waste lots of clock as an encore. The Patriots held Marshawn Lynch to 41 rushing yards, and there’s no doubt that they’ll make Mark Sanchez beat them. Dustin Keller is healthy and a must-start if you’re a Tony Gonzalez or Antonio Gates owner. I believe in the Chaz Schilens renaissance. It feels like a “Danny Woodhead tumbleweeding his way into the end zone” week.

I hate to say that the Raiders are a fantasy gold mine this week, but they probably are. Gross. Denarius Moore was terrific against the Falcons, getting open whenever and however he felt like it. Darrius Heyward-Bey should see more targets as he gets back in the groove and Moore begins to pull more attention his way. Darren McFadden got the ball almost 30 times against the Falcons and should again.

Nothing resembles the Bengals offense better than a Rucker Park game on a night an NBA player shows up. The Bengals are basically going to run every play for A.J. Green, the defense is going to know this, and yet Green is going to drop fantasy points like he’s Kevin Durant crossing up gym teachers and security guards.

The running back situation for the Steelers quickly went from being a mess to being a full-blown quagmire when Rashard Mendenhall tweaked his Achilles last week. At this point, you could just put the names Mendenhall, Redman, Dwyer, and Batch in a hat.

After looking terrible for three quarters last week, The Staff Infection (I’m open to other nicknames, because that one is awful) turned it on in the fourth quarter after the terrible Iggles let him hang around. This Bears squad is not going to do that. I know you have to start him and Calvin Johnson, but those are the only Lions I feel even slightly confident about. Mikel Leshoure deserves to stay on your bench this week, even with six teams on bye. I said three weeks ago that I thought that Brandon Marshall might end the year as the no. 1 WR in fantasy, and I’m not ready to give up yet. I think this game is a blowout, and if you’re desperate for a TE, I think that Six-Seven Kellen (terrible nickname alert!) Davis has an above-average shot at scoring.

About Last Weekend: Giants Give Cards the Bird