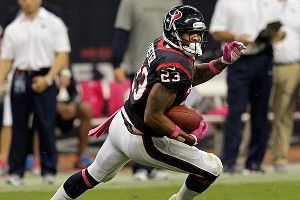 I’m still reeling from Thursday night’s gambling fiasco. For those of you who were lucky enough not to have watched, 49ers coach Jim Harbaugh (who I now wish had been punched hard in the face by Lions coach Jim Schwartz during Shakegate) declined a penalty that would have given his team a nine-point lead with under a minute remaining, opting instead to keep the opportunity to kneel down for two plays and maintain a seven-point lead.

Why get in victory formation up one score when you can get in the same formation up two scores? Especially knowing the droves of people on Twitter who want to kill me for telling them to “bet the farm” on the 49ers giving eight points? Thanks to Harbaugh, these degenerates are both furious and farmless.

The worst part is that after 10 years, my wife finally decided to care about my rooting interests, which forced me to spend 25 minutes explaining this very confusing scenario — of course — with no success. A waste of time, even by Jason Garrett’s standards.

I’m going to help you get your farms back, one domestic goat at a time, with NFL prop bets. If you’ve followed my prop bets since the beginning of the season, you’ve done very well. How well? 69,050 jermajesties* well. Among the winners I gave out last week were the Jets to score over 23 points against the emotionally spent Colts, Michael Vick’s fumble woes to continue, and Antonio Gates to score the first touchdown in the Monday-night game. That particular wager paid 10/1. I’m really, really good at this. Let’s keep it going in Week 7.

The Patriots will score over 29 points vs. the Jets

As you can see, I like the Jets to use the back door to cover the spread, but not before the Pats make them pay for their own Week 6 shortcomings by lighting up the scoreboard. Tom Brady and Bill Belichick have never been accused of taking their collective foot off the gas pedal two weeks in a row. Wrong place, wrong time, wrong defensive personnel for the Jets. 15,000 jermajesties

I don’t know who is getting the kickoff, but they’re going to be very psyched to do so. The Bucs have the 31st-best pass defense and the Saints defense is as effective as Wendy’s chili in pill form would be for a case of diarrhea. 15,000 jermajesties

These odds are very low. So low that you’d think the most prolific running back in football was matched up against a depleted defense that’s given up 200-plus yards on the ground in consecutive games. Wait — that’s exactly what’s happening. 5,000 jermajesties

Jermaine Gresham 10/1, Heath Miller 10/1 to score the first TD in the Pittsburgh-Cincinnati game

Brandon Pettigrew 12/1, Kellen Davis 15/1 to score the first touchdown in the Detroit-Chicago game

There were 14 games last week. In five of them, the first touchdown was scored by a tight end. At 10/1 or more odds, this prop is one of the NFL’s hidden gambling gems. Try it in the night games and thank me later. 3,000 jermajesties each

Over/under 13.5: October days before I eventually got around to donating to breast cancer foundations

Under. It was 13 days on the nose. I figured the money goes toward a good cause. Not to mention, I started feeling bad about complaining that bombarding the games with pink has turned Sundays in October into a 10-hour Bubblicious ad.

Here’s my billion-dollar idea: The NFL, DirecTV, and the National Breast Cancer Foundation team up and figure out a way for people to donate to fund research through their televisions. Your TV screen then color-corrects itself depending on how generous you are. You donate $50 — the pink cleats go away. $100 — cleats and hand towels are gone. $500 or more and every last speck of pink disappears. Everyone’s happy — the foundation maximizes awareness and our favorite football stars don’t look like they’re stiff-arming through Candy Land.

And it doesn’t have to end with football. You donate to the American Diabetes Association and all of a sudden your TV makes the adjustment so that Honey Boo Boo’s mother loses a chin or two. Someone please help me patent this masterpiece of an idea.

25/1: odds the Eagles end up hiring Kate Gosselin (she’s available since her recent firing from a cush blogging gig for CouponCabin.com) as their defensive coordinator for 2013

It’s so surprising that a former offensive line coach turned defensive coordinator wasn’t able to get the job done. Seriously — what did the Eagles ever see in Juan Castillo to hire him in the first place? “Juan, we like the way your offensive linemen tackle safeties on the opposing team during interception returns. You’re our guy. Welcome aboard.”

375,000/1: odds that you’ll be disappointed after viewing the Alvarado/Rios fight below

You’re looking at the next great boxing trilogy. Hopefully octology. (Not a word — don’t bother looking it up.) Nice to watch a bout that has zero chance of being screwed up by the judges. Way to save the sport, fellas!

.188!!!!!! I love how the players are blaming the fans’ boos for their disgraceful performance. Cue radio play-by-play man John Sterling: “The Yankees whine … THEEEEEEEEEE Yankees whine!”

Over/under 9.5: How cool it was that Saints bounty scapegoat Scott Fujita was listening to me and Sportsish Guy Simmons praise him on this week’s guess-the-lines podcast (on a scale of 1 to 10)

@sportsguy33 @thecousinsal Thanks for the shout-out on your Podcast. Yes, I was listening.

Incidentally, Simmons and I returned the favor by betting Fujita’s Browns to win the AFC North at 50/1. I feel like he now owes us again.

3/1: odds that one of these pedestrian liars appearing on Jimmy Kimmel Live claiming to have watched a debate that didn’t actually take place will eventually hold a congressional office