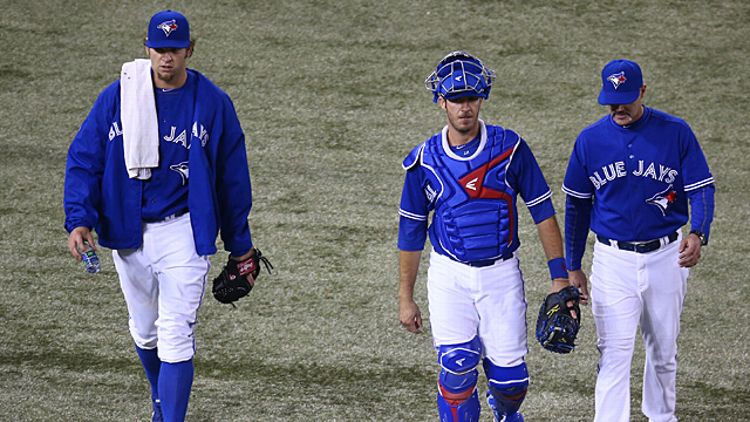 This was supposed to be the year the Toronto Blue Jays took over the local sports landscape. This past winter, the Blue Jays finally flexed the financial might afforded by their owner, telecom giant Rogers Communications. They cashed in a few chips from one of the game’s better farm systems, and soon enough, just about everyone who makes predictions about baseball (including me) foresaw a season that would end with the Blue Jays in the playoffs, their feet sore from having kicked so much ass and their notebooks full from having taken so many names.

The context made it even better — the Yankees and Red Sox, the two teams that had dominated the AL East standings seemingly forever, were set to have down years at the same time for the first time since, well, the last time the Blue Jays made the playoffs.

And on a local level, the NHL lockout meant that hockey might not be on the sports page when the season kicked off, and even if it did, the Maple Leafs were on a famous run of futility, one that had Canadian sportswriters flipping through their dictionaries to see if “moribund” is spelled with an extra “u” in the Commonwealth of Nations.

And yet here we are: The Red Sox and Yankees lead the division, and the Maple Leafs are not only back, but in the playoffs for the first time since Nazem Kadri was in middle school.

The Blue Jays, once again, are in last place, 8½ games behind division-leading Boston, eight games under .500 with playoff odds in the single digits.

As we head into May, where recency bias and small-sample-size caveats are of slightly less overwhelming importance, the questions have started popping up: What went wrong? Is it too late to save Toronto’s season? And what happens next?

The answers to the first two questions are pretty simple: Almost everything went wrong, and it’s not too late to save 2013, but the Blue Jays are going to need to play out of their minds and get some help if they’re going to climb up the standings.

So what happens next? Do they trade Josh Johnson at the deadline rather than letting him walk in free agency? Do they give up on Colby Rasmus, über-prospect who had failed to crack even a .290 OBP in almost two years in Toronto before last night? Or do they double down on the current path and re-arm, taking on more imposing contracts and trading away more promising young talent in a desperate attempt to vindicate management’s decision to spend big this past offseason?

Or do they do nothing?

That’s what you’re supposed to do when you’re driving along and you hit a patch of ice: keep the wheel straight and your feet off the pedals until you get traction again.

While the “all-in” mentality of the fleecing of the Marlins and the R.A. Dickey trade might lead people to think this Blue Jays team was built on the fly, it wasn’t. This squad has been constructed patiently and gradually over the course of years. General manager Alex Anthopoulos has been painstakingly developing a potential contender, biding his time like Captain Nemo building the Nautilus at his secret base in Vulcania. And even though Anthopoulos made those splashy moves, moves that carried great risk and came at a great cost in personnel and in money, it’s not the kind of thing you dismantle after 30 days of bad luck. Actually, considering their April record, the passage of time favors Toronto.

Every day that passes is one day closer to Jose Reyes coming back, one day closer to Anthony Gose and Marcus Stroman becoming big league contributors. It’s one more day for Brett Lawrie to realize that he can’t use his dynamic athleticism to run into walls and throw things at umpires if he ever wants to play 150 games in a season. One more day for John Gibbons to realize that he’s writing Adam Lind’s name into the lineup every afternoon and stage a sit-in in Anthopoulos’s office until he’s given a better option.

No matter the standings, the Blue Jays have one of baseball’s deeper lineups, the reigning NL Cy Young winner, and two other starting pitchers who, on their day, can flash no. 1 starter stuff. Time won’t solve all of Toronto’s question marks, so maybe Anthopoulos will make a move at the deadline or in the offseason to shore up an area of weakness.

But we’re far enough into the 2013 season where Toronto’s management and fans might just have to make peace with the idea that the postseason isn’t likely to happen anymore. And if that’s the case, the worst possible thing you can do is overreact out of panic. The payoff should still come — just maybe not as soon as we would have liked.