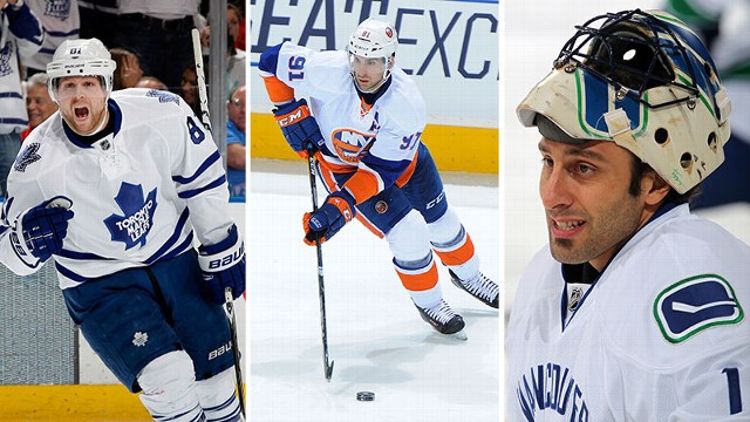 Backstory: At last! The Toronto Maple Leafs ended their reign atop the hockey playoff-drought power rankings by finally qualifying for the first time in seven seasons. (Congratulations, Edmonton Oilers, you’re our new biggest loser!) Now they’ll try to erase another unsavory piece of history: their 46-year Stanley Cup drought. Toronto owes much of its success to goaltender James Reimer, who finished this season with a .924 save percentage and helped nip Roberto Luongo chatter in the bud. They’ve been led offensively by Phil Kessel (52 points), Nazem Kadri (44), and James van Riemsdyk (32) this season.

The Bruins limp into the postseason having won just three of their last 10 games down the stretch and fallen out of the Northeast Division’s top slot on the last day of the regular season. They’ll welcome back 13-goal scorer Nathan Horton, who missed five games because of an upper-body injury, and rely on contributions from the likes of David Krejci, Tyler Seguin, and Patrice Bergeron for offense. The good news is that when you have a guy like Zdeno Chara on your team — and you’ve got Tuukka Rask having an excellent season in net — the playoffs become a little easier.

Big Questions: Will Chara be able to shut down Kessel the way he’s able to shut down so many others? Which Milan Lucic will we see this series: the one that every GM drools over or the one that was a healthy scratch against Pittsburgh on April 20? Can Brad Marchand keep up the charmed offensive production he exhibited this season? Will Toronto coach Randy Carlyle continue to mess with the minds of his fans by valuing grit over skill?

Any Bad Blood? Poor Phil Kessel. When two teams haven’t met in the playoffs since 1974 and there isn’t enough preexisting animosity to forge a proper rivalry, the easiest way to stir things up is to look at trades between the two teams and loudly proclaim a winner. In this case, fans have two to choose from: the 2006 trade that brought Rask to Boston, or everyone’s favorite, the 2009 trade of Kessel from Boston to Toronto for two draft picks that later became Seguin and Dougie Hamilton. (If Seguin scores a goal in Boston this series, expect to hear a “Thank you, Kessel” chant filling TD Bank Garden.) “Maybe not as classic a rivalry as a Montreal-Boston or Toronto-Montreal I guess,” said the Bruins’ Shawn Thornton, “but I think whenever you have two Original Six teams going at it and they haven’t been in it for a while … I know they’re going to be pretty jacked up.”

Fun Fact: During the NHL lockout, Kessel spent his weekends watching women’s hockey. His sister Amanda led the Minnesota Golden Gophers to an undefeated season and a national championship. “He watches a lot,” Amanda said of him in December. “He doesn’t have anything to do. His Friday and Saturday nights consist of watching the Gopher women’s hockey team with my other brother. I know he’s bored and just wants to get going.”

Bold Prediction: Here’s some ominous news for Toronto: The team finished the season with the league’s highest PDO, a metric that gives an indication of how many “lucky bounces” a team has benefited from over the course of a season. In Toronto’s case, it’s inflated by an unsustainably high shooting percentage that should be expected to drop. But more worrisome is their puck possession numbers: By one count, only 44 percent of the shots being taken in close Maple Leafs games this season were taken by Toronto, second worst in the league. (Boston’s number? Fifty-four percent.) These are almost exactly the opposite of the L.A. Kings’ underlying numbers last spring, and none of this bodes well for the Leafs in the playoffs. (Although on the other hand, the small sample size of a playoff series is the perfect place to hide flaws!) Bruins in six.

Representative Song: “Karma Police,” by Radiohead. Because do you have any doubt that this is going to devolve into the kind of series where we’re watching slow-motion frame-by-frame replays of questionable hits and squabbling to one another about levels of classiness? Get ready.

Backstory: The New York Islanders, led by wunderkind John Tavares, became a national darling this season. (Once the first player to be granted an “exceptional player” exemption in major juniors, Tavares now frighteningly plays like a veteran at the ripe age of 22.) But they’ve been constructing this squad for some time, and on a limited budget to boot.

As for the Penguins, what is there to say? The team is a hockey Voltron, but it’s still all in theory; we’ve never actually had all the pieces dug out from under the couch at the same time. This series will most likely be no exception: Sidney Crosby is still skating with a protective mask, while Evgeni Malkin is trying to get back to being, as goalie Marc-Andre Fleury puts it, “like Geno, you know?” Of course, it’s terrifying to know that guys like Jarome Iginla and Brenden Morrow are background pieces, but it’s also hard to envision yet exactly what that means.

Big Questions: Will Sid return for any part of this series, and how Space Jam–y will his helmet look if he does? (Formerly broken-jawed Justin Bourne winces at the idea of Crosby considering a return.) Fleury and/or the Penguins’ penalty kill can be reliably counted upon for at least one festival of errors, yes? Tavares is a beast, and no that is not a question. When you’re watching an Islanders game and someone walks in the room, how exciting is that pregnant moment before they get their first glimpse of Jack Capuano?

Any Bad Blood? Well, there is an entire Wikipedia entry for “Penguins-Islanders brawl,” which says a lot. That 2011 game featured 65 penalties for a total of 346 minutes. The two teams have also met three times in the playoffs. The Islanders are 3-0 in those series — including one in 1975 that saw the Islanders come back from a 3-0 deficit to win four games to three.

Fun Fact: It was during a game against the Islanders in which Crosby was hit with a Brooks Orpik snap shot and went down. [Plays “Phantom of the Opera” on an organ.] In other news, the Islanders bandwagon looks exactly as you’d expect.

Bold Prediction: There’s just no way the Islanders will lose twice in a row at a Nassau Coliseum that will be losing its collective mind. Also, I like to think that Evgeni Nabokov will randomly attain “first-round hot goalie” status in this postseason because why not? Penguins in six, with a fed-up Crosby having to roll up his sleeves and return to help finish things off himself.

Representative Song: Something by Billy Joel, obviously. I was gonna use “The Longest Time,” but that’s the property of the Maple Leafs, and besides, “You may be right, I may be crazy” is like the unofficial slogan of die-hard Isles fans everywhere.

Backstory: Even in a lockout season, the Sharks are well-versed in the mood swings that accompany a series; after starting the season 7-0-0 and then seeing their record drop to 7-4-3 over the next seven games, they have to be. The Canucks have quietly rolled along this season, beset by the usual injury to Ryan Kesler and the casual brilliance of the only-getting-older Sedin twins. The Sharks and Canucks have more similarities than they’d probably like to admit. Both have had impressive runs of regular-season and playoff success, with the Canucks coming within a game of the Stanley Cup and the Sharks getting to the Western Conference finals, and both are starting to face questions of what that will mean if they don’t win it all.

In any playoff matchup, you know that someone will be eliminated, but Sharks-Canucks has an element that reminds one of the dread created by, say, The Hunger Games or Game of Thrones — an unsettling feeling that not only is one team going to die, it’s not going to be pretty for anyone involved. The problem with the Sharks and Canucks, more so than in any other series, is that the losing team will have fallen in the first round for the second straight year. For either side, that will be unacceptable.

Big Questions: Will Logan Couture continue his ascent? (We know he gets up to play teams like Edmonton, because he measures his game against some of their young talent, so will showcasing his skills in front of Canadian audiences provide a similar lift?) How will Todd McLellan and Alain Vigneault, two of the leagues most actively analytic coaches, deploy their player combinations? Will Ryan Kesler stay injury-free? Will Patrick Marleau shed the ridiculous cloak of playoff underperformance?

Any Bad Blood? The Sharks and Canucks have met only once in the playoffs, the 2011 Western Conference finals won by Vancouver 4-1, before the Canucks lost in seven games to Boston for the Stanley Cup. But that series was certainly filled with rancor, particularly after a Game 2 incident in which Ben Eager was called for boarding Daniel Sedin and Vigneault said: “In our mind anyway he went out and tried to hurt our player, the potential NHL MVP. That’s how their coach wants him to play.” There’s potential for this to be a very heated series, and that’s before you even remember that Raffi Torres plays for San Jose now. When the two teams met back in late January, Couture and Alexandre Burrows got into it before the opening faceoff. “Burrows tried to put his head into my face so I just lifted his head up and then he sucker punched me and I don’t know, it was a good start to the game,” Couture explained.

Fun Fact: Three Canucks made Cosmo‘s brilliantly lazy list of “The Hottest Guys of the NHL Playoffs 2013.” Congratulations to Kesler, Maxim Lapierre, and Chris Higgins (who was Yale hockey before Yale hockey was Yale hockey). The Sharks were solely represented by Dan Boyle.

Bold Prediction: These are two teams that can withstand volatility, which is a good thing because they could be looking at a long back-and-forth series. Sharks in seven.

Representative Song: Save tonight, and fight the break of dawn. ’Cause tomorrow? Tomorrow, one of you will be gone.