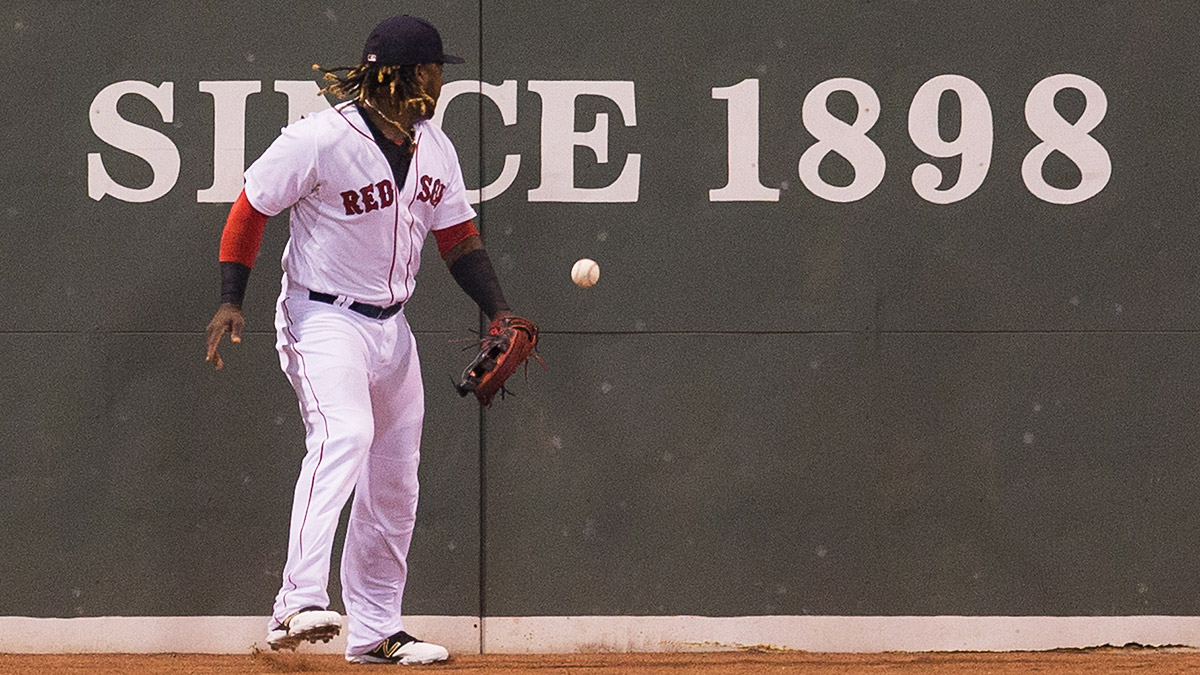 No one would’ve blamed Ben Cherington if he would have bowed out of Saberseminar, the annual meeting of baseball’s analytical minds. When he’d accepted the invitation, months before the conference was scheduled to start, Cherington was the GM of the Red Sox. On Saturday, he was a civilian, newly resigned from the organization he’d worked for since Pedro’s peak. Still, he stood on a Boston University stage, leading with a self-deprecating reference to his present unemployment, dispensing hard-earned advice about drawing conclusions from data, and taking questions from the crowd. In a kinder world, the first question would’ve been a softball about David Ortiz, or a request to explain Alejandro De Aza. Instead, it started with, “So … Hanley Ramirez.” It took several seconds for the resulting laughter to subside.

It’s not unusual for high-priced free agents to go from headline to punch line in the span of a single contract, but it doesn’t often happen as quickly as it has for Boston’s top winter targets, Ramirez and Pablo Sandoval. Seeking a quick recovery from a last-place 2014 finish, the Red Sox signed the two stars after a season in which they’d combined for more than six WAR and helped take their teams, the Dodgers and Giants, to the playoffs. So far, the Sox have received minus-2.5 WAR for their $183 million, nine-year investment, and the team is only three wins ahead of last year’s 71-win pace.

The Ramirez and Sandoval acquisitions, completed on the same payroll-raising day late last November, didn’t make many lists of the winter’s best bargains, but they also weren’t widely condemned. Critics echoed the standard concerns expressed about any long-term deal — the players are past their primes, they won’t age well, they don’t address the real roster deficiencies — along with a louder-than-usual murmur of “they’re question marks in the clubhouse.” But even those who thought the Red Sox’s deals were so big that they were likely to fail shouldn’t sprain a shoulder patting themselves on the back. There’s some amount of money at which anyone would’ve wanted Cherington’s new toys. If not $183 million, then what about $150 million? $100 million? $50 million?

In retrospect, almost any amount would have been an overpay, at least for this season. According to Ultimate Zone Rating, Ramirez and Sandoval have been the worst and second-worst defenders in baseball, relative to their positional peers. They’re also having their worst offensive seasons, posting .254/.296/.435 and .259/.307/.392 lines, respectively. Start with bad defense, flavor with below-average offense, and bake for a combined 213 games, and you get two of the first five names on the list of lowest WAR totals. Boston’s problems go well beyond Ramirez and Sandoval, but had the pair played up to their projections, the Sox (and, in all likelihood, Cherington) would be contending for a wild card instead of stuck in last place.

Many critics can claim they wouldn’t have signed Sandoval and Ramirez, particularly at list price, but no one can claim to have been bearish enough. My colleague Jonah Keri, whose response to the signings stressed the risk the Sox were assuming, nonetheless conceded that adding two of the winter’s top-rated free agents — one of whom played the other’s ideal position — made Boston “a better team today than it was yesterday.” At the time, that seemed almost inarguable. Nine months later, we know it not to be true.

We could blame Sandoval’s decline on his weight, which observers are always eager to do. We could blame Ramirez’s offensive slump on his early-May collision with the left-field wall, which came when he was slugging .609. But Hanley’s performance in left is the most stubborn cipher. And if his inexperience in the outfield contributed to that collision, which in turn took down his offense, then it wouldn’t be a stretch to pin the blame for his whole, miserable season on the position switch from shortstop.

Or maybe on Cherington, who orchestrated the switch. After his opening laugh line, the Saberseminar inquisitor asked Cherington why the Sox had assumed that putting Hanley in the outfield would work. “We made a bet based on the history of what players look like when they move from a middle-infield position to another position,” Cherington said. “And there’s data that can help us try to make an educated guess on that.”

$88 million is a big stake for a “bet” or an “educated guess.” But no signing is a certainty. And while Boston’s data might be better than ours, we can still get a good idea of what the Red Sox were relying on when they concluded that Hanley could handle left field. It’s not just Mookie Betts’s smooth move from second to center: Over the 13 full seasons for which we have UZR data, 332 players — ranging from utility types to Albert Pujols — spent time at both shortstop and left field in the same year. Weighted by innings played at each position, their defense rated 3.2 runs below average per 150 games at shortstop relative to other shortstops, and 4.2 runs above average per 150 games relative to other left fielders. It isn’t uncommon for a below-average part-timer at short to be above average in an outfield corner.

Admittedly, there isn’t much precedent for the direct short-to-left transition: In the UZR era, no player has switched from full-time shortstop to full-time left fielder in consecutive seasons. If Hanley was asked to be a trailblazer, though, it was only because most shortstops don’t have the bat or the bulk to play left, and because most shortstops’ gloves are too good to hide at a relatively unimportant position. Shortstops who age off the position or are pushed aside by better players tend to slide over to second or third, or even to become successful center fielders, like Billy Hamilton or, before that, Melvin Upton (when he still went by B.J.). Physically, Ramirez belonged at third base, the position he played in 2012. And the third-to-left gambit has worked out well before.

In placing their big bet, the Sox were counting on positional scarcity and positional adjustments, two backbones of WAR. It’s basic baseball knowledge that the positions on the left side of the defensive spectrum (first base, left field) are easier than those on the opposite end (shortstop, catcher), which means that more people can play them. Given a choice between an average defensive shortstop and an average defensive left fielder with the same offensive ability, almost any team would take the shortstop. It doesn’t follow that every shortstop could excel in left, but many of them could hang there. Using the performance of past position changers as a guide, WAR attempts to quantify that relationship, giving shortstops a 7.5-run value boost and subtracting the same amount from left fielders.

Left field at Fenway is the smallest in baseball, at 103,100 square feet — 2,000 square feet smaller than the next-smallest left field, and almost 6,000 square feet smaller than the MLB average. Unpredictable bounces off the Green Monster and its manual scoreboard make the corner more difficult than it would be with a normal outfield fence, but Boston’s evaluation options were limited. Asking Ramirez to shag flies would’ve been a breach of free-agency etiquette. And even if Fenway hadn’t looked like this for much of the winter, a few offseason fungoes wouldn’t have revealed how Ramirez would react in a real game, after months of preparation. As Cherington acknowledged on Saturday, “there was no way to know for sure.”

That admission makes Cherington sound smarter than another Red Sox evaluator, who insisted this spring that the relocation carried no risk. Logically, though, there was little reason to expect Ramirez to be even further below the league average at an “easy” position than he was at one of the hardest. And yet, by our best estimates, he has been. According to Inside Edge, Hanley has made 86 percent of possible plays in left this season. Leaguewide — and Red Sox rosterwide, excluding Ramirez — left fielders have made 91 percent of possible plays. That sounds like a small gap, the difference between a high B and a medium A-. But given that most outfield opportunities are cans of corn, a small difference in balls caught can be costly. And the stats are backed up by a gag reel of eye-gouging misplays, highlighted by the following six, which IE classified as “likely” or “almost certain” outs. That’s not even counting the throws.

Yesterday, I talked to a former teammate of Ramirez, who told me that the conversion was doomed from the start — that because of Ramirez’s sensitivity and self-doubt, his first mistake was destined to snowball into many more. This is where a crusty columnist would say that the Red Sox trusted too much in their spreadsheets and saw Hanley not as a human, but as a position and a Player ID. That seems like an oversimplification: It’s not as if the Sox queried their database and called it a day. They also talked to Ramirez, who sounded super-confident, and undoubtedly consulted scouts and other sources for insights into his psyche. So what didn’t the Sox see?

In a 2014 essay entitled “N=1,” Baseball Prospectus author Russell Carleton argued that baseball analysis has focused too often on “Large N” research — studies based on big populations of players — rather than drilling down on the individual. “We’ve come to ignore, or worse, dismiss the thought that players might react to situations in different ways,” Carleton wrote. The “next big thing,” he added, is “understanding the nuances of each player on a case-by-case basis” instead of relying only on “strategies that can be applied across entire organizations or in every situation.” Maybe the takeaway is that the Sox rushed through their homework, or that they discarded the parts they couldn’t square with the stats. But maybe it’s just that the homework was hard. In groups, players are predictable. In isolation, they’re unknowns.

In 2004, Bill James — who works in the Red Sox front office and was in the audience at Saberseminar — wrote a defense of uncertainty called “Underestimating the Fog.” He argued that many counterintuitive tenets that were seen as central to sabermetrics at the time — assertions like “clutch hitters don’t exist,” “winning or losing close games is luck,” or “batters don’t get hot or cold” — weren’t actually settled science, and that our failure to find proof that some alleged skills existed wasn’t conclusive proof that they didn’t. James listed nine such maxims, but he might have added a 10th: “It’s easier to play positions on the easier end of the defensive spectrum.” Or, more specifically, “it’s easier to play left field than shortstop.” For most players, this is probably true. In Hanley’s case, though, left field is in the fog.

There were plenty of reasons to dislike the Ramirez signing: his salary, his fragility, his age, even his attitude. But “because he’ll be one of the worst players in baseball” wasn’t one of them. Cherington deserved his dismissal, but we were all wrong about Ramirez, to different degrees. We just weren’t the ones with the checkbook, or up on that Saberseminar stage.

Thanks to Ryan Sullivan for audio assistance and Keith Isley of Inside Edge for research assistance.

It's Not You, It's My Tactics: Francis Coquelin and the Impossibility of the Defensive Midfielder