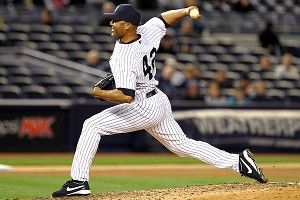 On the other end of the line, the voice crackled. It always sounded like Kermit the Frog, LeBron thought. “Are you on a pay phone?” V asked. “Please tell me you’re on a f***ing pay phone, because I know you wouldn’t be f***ing stupid enough to be calling me on your very f***ing traceable cell phone.”

“Oh, just an off day,” the man said, leaning forward. “Thought I’d see some of the country. Dallas is a pit.” He slipped a piece of paper onto the passenger seat. “You have a good memory, don’t you, Sergio? You remember how well our last little enterprise went? How good it was for Oklahoma and Team España? Time to settle accounts. Call that number. Tell him we need the Baranquilla Baby.”

As Ibaka struggled to catch his breath, he heard the door open, and V slipped off into the rainy night. “My name is not Sergio,” Ibaka hissed, but all he felt was terror.

“I’ve been reading about you, Tommy,” said the voice. “You’ve misbehaved. They might expel you.”

“I need out!” Rees screamed.

“And I need your services.”

“The trampoline paid our debts,” said Rees, struggling not to panic. “You said we were square.”

“Enjoy prison, Tommy,” said V. “And enjoy greeting housewives at Walmart for the next 40 years. I’d tell you that felons can’t vote, but I can’t imagine the political process interests a man of your … abilities.”

Minutes later, the felony battery charge had been reduced, and Rees was out of jail on a bond.

That afternoon, when he checked his BlackBerry at lunch, Brodeur found an e-mail from one of his most reliable sources. “Urgent!” said the subject line. “V spotted in Dallas,” Brodeur read. “Lost his trail, but he was headed to American Airlines Center.” Brodeur clenched a fist. He’d spent a career trying to foil V, and it was just getting harder. What was in Dallas? Who was the target? Whatever the case, he knew there wasn’t much time. He left his lunch on the café table and raced out into the city.

“You texted?” the man asked, his voice thick with a Spanish accent.

“Got a very strange call this morning, from our friend Serge. He wanted the Baranquilla Baby,” said Rolen.

Edgar Renteria laughed. “Which means V wanted me, but needed to erase the communications trail. And he knows I carry no teléfono.”

“The less I know, the better,” said Rolen.

“How did V get you?” Renteria asked.

Renteria laughed. “I’m sure it was no muy difícil, with that capullo.”

“What do you hear about V in Dallas?” Brodeur asked.

“Who is this?” Doughty asked coyly.

“I swear to God, Drew, you fuck with me on this and I’ll tell every media outlet between here and Japan about your skates.”

“Hey, cool out!” said Doughty. “Fine. I don’t know why he’s there. But I did hear that he was responsible for Rose going down, and that Ibaka … well, Ibaka wasn’t too upset.”

There’s the connection, Brodeur thought, ending the call and hurrying away.

“What I’m asking myself,” said Renteria, speaking on a Cincinnati pay phone yesterday afternoon, “is how you got an NFL attorney, and why? Is it for Cam Newton and the Panthers?”

“That is not your concern, Baranquilla Baby,” said the Kermit-like voice. “At the moment, I require your Colombian connections. You’re one of the few Colombian big league players, but I’m sure you knew that. Your country … you export bananas, yes?”

“It’s one of our main exports,” said Renteria. “Legal ones, anyway.”

“I need the real slippery kind. And I need them in Kansas City.”

Renteria sighed. “I never should have called you up in ’97,” he said. “Much less 2010. But the glory … the glory is muy delicioso, I must admit.” He frowned into the phone. “Garfield and East 26th, by Spring Valley Park. You can pick them up at 5 p.m. Who’s the target? Who hired you?”

V laughed. “The target? Only the greatest of all time. And this one … this one’s not about money. This one’s personal.”

At 6 p.m., in a state of desperation after hours of phone calls, Martin Brodeur finally found Tim Tebow. “My God! Tim! You’re safe!” he said, hugging the quarterback.

“It’s so hard to explain, but I’ll try. See, there’s a syndicate. A man named V. He hurts people. Derrick Rose, Joba Chamberlain, Amar’e Stoudemire. He influences games. He’s a supervillain, Tim. I know it sounds insane, but it’s true. And today, he’s up to something in New York. That’s all I could find out. The victim is New York. It has to be you, Tim! Who else? Who else is so high-profile? It has to be you. He wants you gone. He’s an egotist. He hates New York, and he hates anyone who takes attention away from him.”

“Who is it?” Tebow asked, suddenly panicked.

“I don’t know … I don’t know yet. He’s too careful.” Brodeur caught his breath and smiled. “Listen, I have a game. You’re coming to New Jersey with me. I foiled him. For once in my damn life, I foiled him.”

Rees touched down at Kansas City International Airport at 5 p.m. central time. His first stop was at a downtown Kinko’s. He proceeded to the apartment by Spring Valley Park, where a quiet man who spoke broken English handed him a bag of bananas.

“Are they slippery?” Rees asked.

Rees slipped him the envelope of cash. At Kauffman Stadium, Rees found the longest line at his gate. He was stopped by security. “You can’t bring your own food in,” the man said, spotting the bananas.

“I have a critical potassium deficiency,” Rees said. “I have a permit from the city.” He handed over the paper V had sent him over e-mail.

The usher, seeing the backed-up line, waved him through. Rees proceeded to the outfield, where he waited as the Yankees took batting practice. He ate the bananas, one by one. At the exact moment, precise to the instant, he let two of them fall out of his hands and onto the outfield. He stood up, as instructed, and left the stadium. He didn’t even stay to watch what happened.

(Reader’s Revenge this week is “Worst Moment with In-Laws or Significant Other’s Family.” Send e-mails to tobaccordblues@gmail.com by Sunday to make the top 10 Monday. Click the link for more details.)

No Love for the Brooklyn Nets Logo