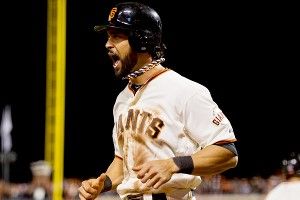 In an overgrown patch of land behind a repair shop off La Cienega, Terrence and Hezekiah climbed through a hole in a collapsed fence. The field was strewn with old hubcaps and tires and the rusted skeleton of a 1962 Dodge Dart.

“Reckon in thy heart the flurries and the gales,” said Hezekiah. “Thou shalt be carried in the tempest, to heaven or perdition.”

Terrence felt the blustering current rattling his joints. These were the famed Santa Ana Winds, dry as dust, and he could feel the heat of their desert origin. The robots stood back-to-back. “Hast thou any final ruminations?” asked Hezekiah. But Terrence was silent, and this gave Hezekiah pause. In his former duels, he had run across brashness and begging and resignation. But never silence.

The robots held their flat-head screwdrivers and took 10 even paces. They turned and began the approach. Terrence kept his eyes on Hezekiah, as instructed, but he could see movement from the corner of his eye as the hood of the Dodge Dart lifted. A man emerged, lithe and strong, holding a long implement. He shook out his muscles. Terrence didn’t know it, but he had stayed motionless in the car for hours. As the blood roared back to his limbs, he darted forward, faster than any robot.

“On a windy day, there are things you can’t hear.”

Hezekiah stopped. The words floated on the wind, but they hadn’t come from Terrence. Strange. Before he could speak, he felt a human hand pushing his head. He fell to his knees. “No,” he whispered, but the last word he would ever speak was lost to Santa Ana. The man jammed the electric cattle prod into Hezekiah’s windmill, sending 1.7 million volts of current through his robotic insides. Terrence watched from 10 feet away as smoke rose from the electrified chassis. In less than 30 seconds, Hezekiah’s lifeless form collapsed to the ground.

The man ripped his arm from the smoking heap of what was once Hezekiah. “How does it feel, Terrence?” he shouted, wearing a large grin. “How does it feel to be alive?” He didn’t wait for a response. “You’ve never met me before. Perhaps you expected someone different. But that man once did me a favor, and when a favor is done for us, we do a favor in return. He trusts that you will remember.”

Terrence stared, and managed a nod.

“And he trusts that you won’t forget,” the man continued, “that in your hour of need, one man saved your life, and one went blithely on, making jokes.”

In the sky, the sound of whirring rotors pierced the wind. The helicopter hovered above the junkyard, and a rope came swinging down. A box was attached to the end, and the man set it on the ground.

“Go back to Grantland,” he said. “And take this gift.” With that, he grabbed the rope and was lifted into the sky.

When the sky was clear, Terrence took a few unsteady steps. The wind had died down, and the Santa Ana fog was already settling in. Inside the box, he found a bottle of premium Turkish oil. It was the kind you couldn’t buy in America, and that he’d only ever read about in books about the wealthy. He turned the bottle over in his hands, and saw a handwritten note on the back.

“Be ready,” it said. Just that, and one other scrawl, underlined twice — a date in mid-December.

The note was signed with a V.