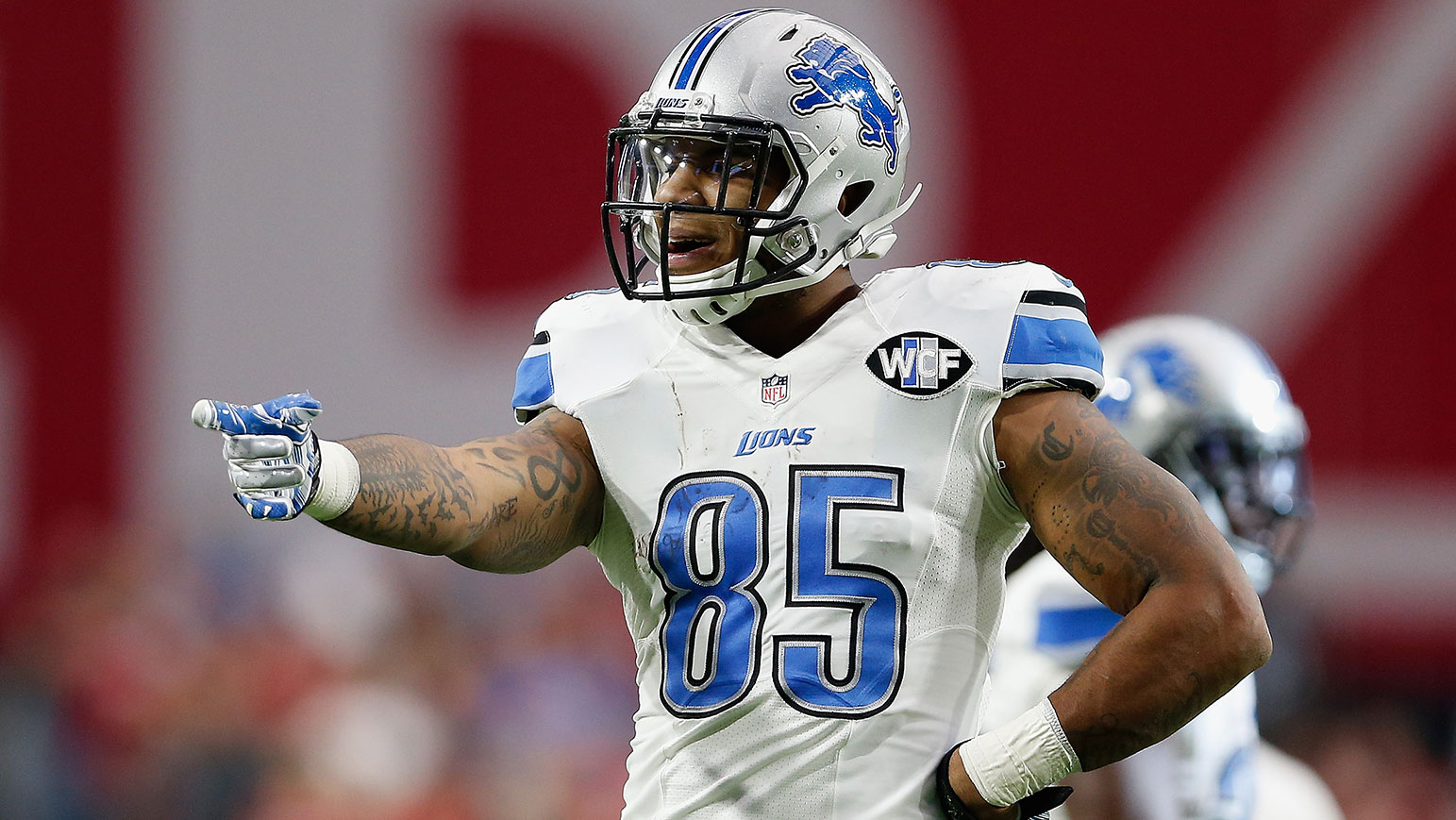 After the dazzling debuts of rookie first-round receivers Odell Beckham, Mike Evans, Sammy Watkins, Kelvin Benjamin, and Brandin Cooks, the afterimage of last season hasn’t entirely faded. Beckham snagged the Offensive Rookie of the Year award with one hand, and a historically great class delivered a bevy of dynamic performances. Their futures are so bright that it’s easy to forget that the Lions thought they discovered their own supernova by drafting tight end Eric Ebron no. 10 overall. Many observers labeled it a surprising pick for a franchise with a leaky secondary, but Detroit thought it was a steal: The front office had ranked Ebron, an up-the-seam playmaker who set the ACC record for career receiving yards by a tight end, as the second-best offensive player in the draft behind Watkins.

It's almost here. For everything you need to know about the new season, follow all of Grantland's coverage.
It’s still early, but … about that. Ebron, who missed three games with a hamstring injury, finished the season with only 25 catches for 248 yards and one touchdown. His struggles didn’t raise too much concern nationally because Detroit still finished 11-5 — the most wins for the franchise since 1991 — and earned a playoff berth. But the team was carried by an elite defense, and after spurning Ndamukong Suh and Nick Fairley in the offseason, Detroit will need an improved offense to stay ahead of on-the-rise Minnesota and to have any chance to catch Green Bay in the NFC North.

Despite Golden Tate’s season-long celebration — he demolished previous career bests with 99 catches for 1,331 yards — after being released from the run-first shackles in Seattle, the Lions were a league-average offense in 2014. Injuries to Calvin Johnson and the offensive line didn’t help cohesion under new offensive coordinator Joe Lombardi, who culled heavily from the Saints playbook after spending five seasons as their quarterbacks coach.1 It’s an offensive system that tries to create mismatches by using pre-snap motion and running the same plays from different formations, and hopes were high that Ebron would be a Jimmy Graham doppelgänger joining a group of established offensive weapons.

Any offense intended to confuse opponents, though, can also confuse first-time participants. The fast-paced education was particularly challenging for Ebron, who was forced to learn multiple positions while adjusting to quicker, stronger NFL competition. Imagine if Detroit asked 2015 first-round pick Laken Tomlinson to play left guard, center, and right tackle — in one drive. That’s essentially what Ebron had to do — rotating from slot receiver to in-line tight end to H-back to outside-the-numbers threat — and lining up in so many places prevented him from ever getting comfortable. Instead of exploiting the secondary downfield, his receptions last season came largely on quick outs or hitches, where he picked up first downs as a safety valve. That’s the mark of a serviceable tight end, but the Lions used a valuable first-round pick on Ebron with hopes of stretching the field, and they’re still waiting.

Most of last season’s tape is unkind to Ebron. His physical tools (6-foot-4, 265 pounds with a 40 time of 4.6 seconds) left scouts agog, and at North Carolina he played like an avalanche, combining deceptive speed with the threat of burying defenders. But that ferocity has melted away in the NFL. Two sideline hurdles late last season were more style than substance, and the next tackle Ebron breaks will be his first as an NFL player. Only once did his size seem like an asset as a receiver, and even that was a mirage: He boxed out Bills cornerback Leodis McKelvin on a slant pattern inside the red zone for an apparent touchdown, but the pass was knocked away and ruled incomplete on review.2 When Detroit coaches praised Ebron’s blocking late in the season, it was a thinly veiled diversionary tactic after the only game he played without being targeted. The moon comes closer to colliding with the sun during a solar eclipse than Ebron did against a no-name Arizona pass-rusher. Tight ends aren’t drafted in the first round to seal the edge, but it’s what makes Rob Gronkowski the best tight end in the NFL, and blocking effectively enough to stay on the field helps disguise whether a play is a run or a pass.

Last season, Lombardi, a tight end himself at Air Force in the early 1990s, tried to put Ebron in position to make plays downfield. Ebron stayed in to block on only 3.4 percent of the pass plays when he was on the field, the fifth-lowest rate among tight ends last season, according to Pro Football Focus. Matthew Stafford threw eight passes of 20 or more air yards in his direction, and despite completing none, the effort itself was notable; in six seasons with Stafford, Brandon Pettigrew has been targeted on passes of that distance only 14 times total. The real problem, as previously noted, was that when Ebron did catch the ball, he never eluded or eviscerated defenders. While turning to catch passes, his propensity was to twist his body completely around, ruining any momentum. A pirouette was prudent on Ebron’s lone touchdown catch, but already in the end zone, he had nowhere else to go. In the open field, unnecessarily turning his shoulders repeatedly brought plays to a halt.

Perhaps we shouldn’t be shocked by Ebron’s slow transition, because few tight ends have an eye-popping rookie season.3 The pertinent question is whether he follows the trajectory of the last tight end drafted in the top 10. Vernon Davis collected only 20 catches and 265 yards as a rookie, but doubled his numbers in his second year and has been a dangerous weapon for the 49ers since, twice making the Pro Bowl after 13-touchdown seasons.

Even if Ebron doubles his numbers this season, plateauing there would turn him into the next Jared Cook — a tight end who is constantly on the verge of superstardom but never meets those expectations. Really, we don’t even need to leave teams to locate that archetype. Pettigrew, selected no. 20 overall in 2009, also doubled his rookie-season numbers (30 catches for 346 yards) in Year 2, but never improved from there, managing only 16 touchdowns in six seasons.

This offseason has delivered the requisite hype after a disappointing rookie season,4 but there are barriers in place that might prevent an Ebron breakout. He was only Detroit’s sixth-most-targeted player last season, and even though Reggie Bush has returned to California, rookie Ameer Abdullah could fill much of that void on a team that likes throwing to running backs. Johnson turns 30 in September, but he is still one of the game’s great receivers and should remain Stafford’s security blanket for several years. If 6-7 reserve tight end Joseph Fauria returns to his touchdown-dancing ways, Ebron might continue to receive few red zone targets, too.

Maybe it’s too easy being pessimistic because of the Motor City’s painful history of wide receiver busts. But even though Ebron is far from entering Charles Rogers or Mike Williams territory, that possibility is a memory, not a nightmare. It’s why Detroit fans who expected a jaw-dropping Transformer to join Megatron are worried they might have ended up with a Micro Machine.