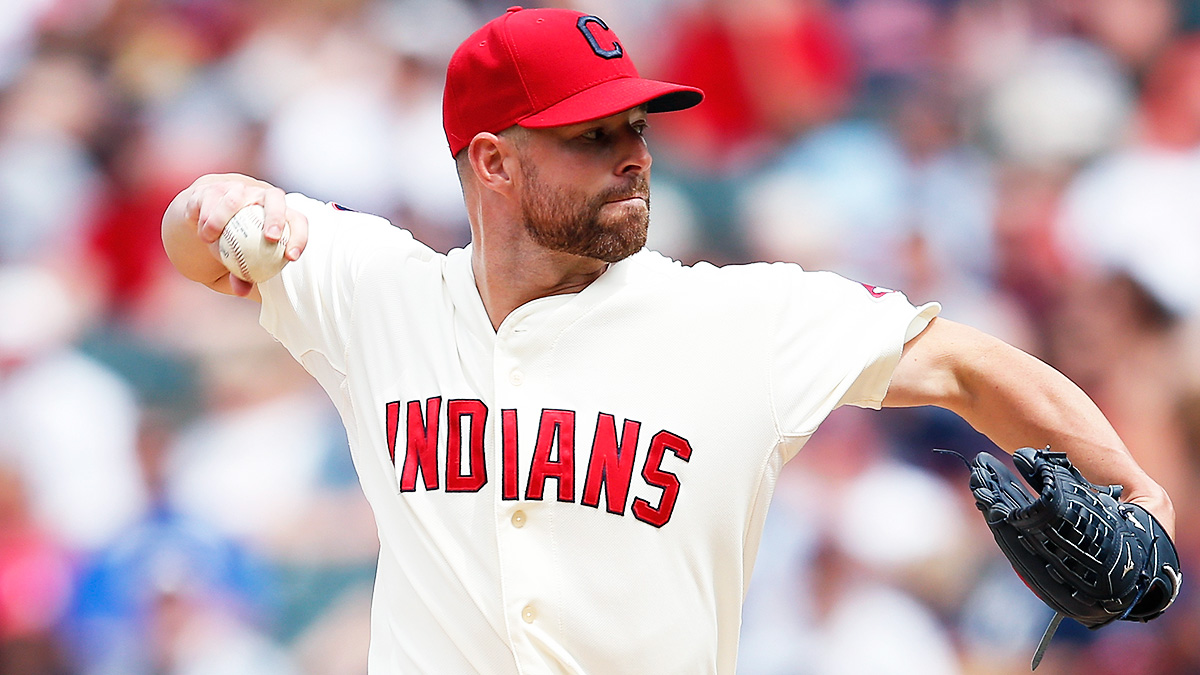 I was pretty high on the Cleveland Indians coming into this season. I thought they’d win their division, thanks largely to the strength of their starting rotation in general and Corey Kluber in particular.

I was wrong. On August 18, the Indians are … actually, nobody benefits from typing out how far out of first place they are. Let’s just say that they’re not going to win the Central. On the surface, that disappointing showing has extended to Kluber, who’s had a rough go of defending his 2014 Cy Young. His ERA is up by almost a full run over last year — and that’s after back-to-back one-run complete games in his past two starts — and that, along with his offensive support dropping by a half-run per start, means that he’s now 8-12 instead of 18-9.

If you look at the underlying numbers, however, you’ll see that Kluber has actually been just as good this year as he was in 2014. FIP is kind of crude, but his is a noteworthy 2.59, the fourth lowest in baseball among qualified starters. The latest ERA estimator, Baseball Prospectus’s DRA, places him in a tie for eighth best in baseball with Johnny Cueto after adjusting for park effects. Add in that Kluber’s thrown 180.2 innings, the most in baseball, and it’s pretty clear that he’s been incredibly valuable, even if his record and ERA haven’t reflected it.

Kluber’s striking out 27 percent of opposing batters — down a little from last year’s 28.3, but still an elite K-rate for a starter — and he’s walking even fewer hitters than in 2014. He’s not giving up particularly harder contact, either by hard-hit percentage or by line-drive rate, and yet he just hasn’t gotten the bounces this year.

We could wrap all of that up with some platitudes about how life isn’t fair and baseball is cruel, and call it a day. I was going to do that, because I love writing about baseball punishing the righteous and elevating the wicked. But while Kluber’s still Kluber in terms of performance, he’s changed his process in a very interesting way.

When Kluber started kicking wholesale ass last year, people started asking questions, because it’s weird to see a pitcher break out like that in his age-28 season. Kluber showed some signs of life in 2010, but he was largely terrible in the minors from the time he was drafted in 2007 until 2011, good in Triple-A in 2012, decent in the majors when he wasn’t hurt in 2013, and the American League Cy Young winner in 2014.

The explanation we got was that he junked his four-seamer back in 2011, electing to go with one fastball: a two-seamer that moves way more than it should be allowed to, considering how hard Kluber throws it. Kluber rode that two-seamer to greatness in 2014, but he struggled in his first seven starts of 2015. In his past 18 starts, however, batters are hitting just .210/.250/.316 off him, for an ERA of 2.78.

This is where it gets interesting: On May 7, Kluber threw 19 four-seamers, by far the most he’d ever thrown in a major league game. He got crushed (five earned runs in 5.2 innings), but he doubled down his next time out, throwing 26 four-seamers on May 13.

That’s the time he fanned 18 Cardinals in only eight innings.

And that wasn’t just a coding error, or a momentary whim. It’s officially a trend. The following graph shows Kluber’s 2015 pitch usage, broken down by month. Notice how the black line looks like a graph of the Mets’ playoff odds this year. 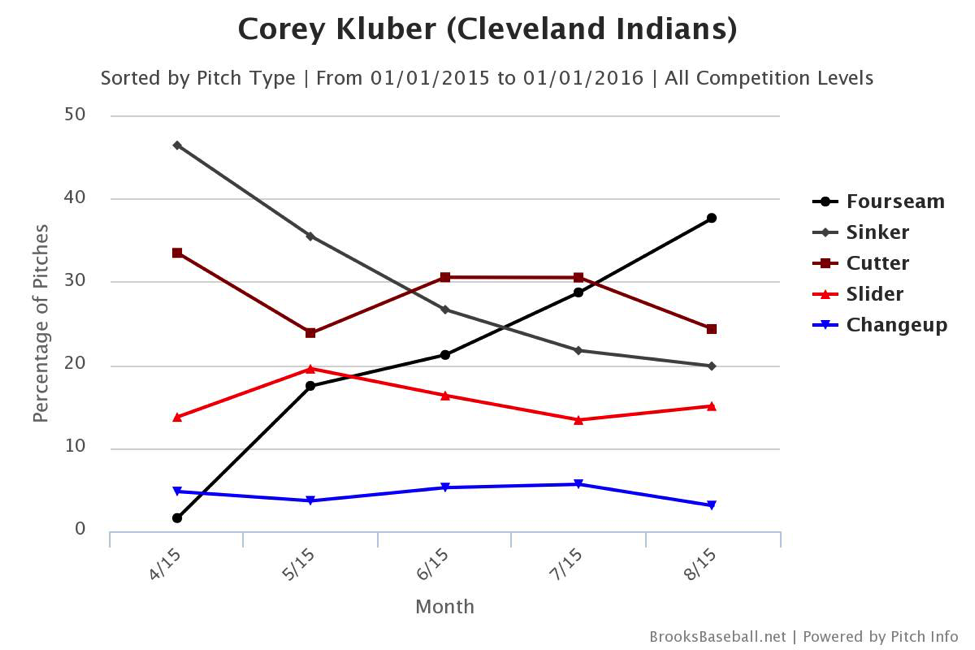 Since June 26, Kluber has thrown more than 30 four-seamers in an outing seven times. And in seven of his past 12 starts, he threw more four-seamers than any other pitch. You can even see it in his batted ball profile.

Kluber’s four-seamer is by no means straight, but it moves less than the two-seamer (which Brooks Baseball calls a sinker) by two and a half inches vertically and four and a half inches horizontally. A two-seam fastball isn’t really intended for getting whiffs so much as ground balls, which makes sense, considering the late break and run isn’t enough for a hitter to swing and miss like he would with a breaking ball, but is enough to sneak under the barrel of the bat to cause a ground ball.

In 2014, Kluber induced ground balls in 48 percent of the plate appearances against him, which ain’t exactly Brandon Webb territory, but was the 29th-highest mark among 88 qualified starters. You easily could have called him a ground ball pitcher. This year, that’s down to 43.7 percent, 52nd highest out of 90.

We tend to think of more ground balls being better, because ground balls tend to lead to double plays and not extra-base hits. But as Kluber and hundreds of pitchers before him have proved, the path to salvation does not necessarily lie in the grass. In the grand scheme of things, these are razor-thin margins anyway — once or twice a game a ball ends up in the air rather than on the ground, and most people probably don’t notice.

But in Kluber’s case, it’s worth noticing. The only reason that Kluber is in the big leagues right now, and the only reason that you know him from arthroscopy enthusiast and sometime San Diego Padre Cory Luebke, is because Kluber figured out how to pitch after almost completely ditching the four-seamer four years ago. Which makes it absolutely fascinating that when he found himself in a corner, Kluber took the adjustment that saved his career and threw it away completely. And once again, it worked.