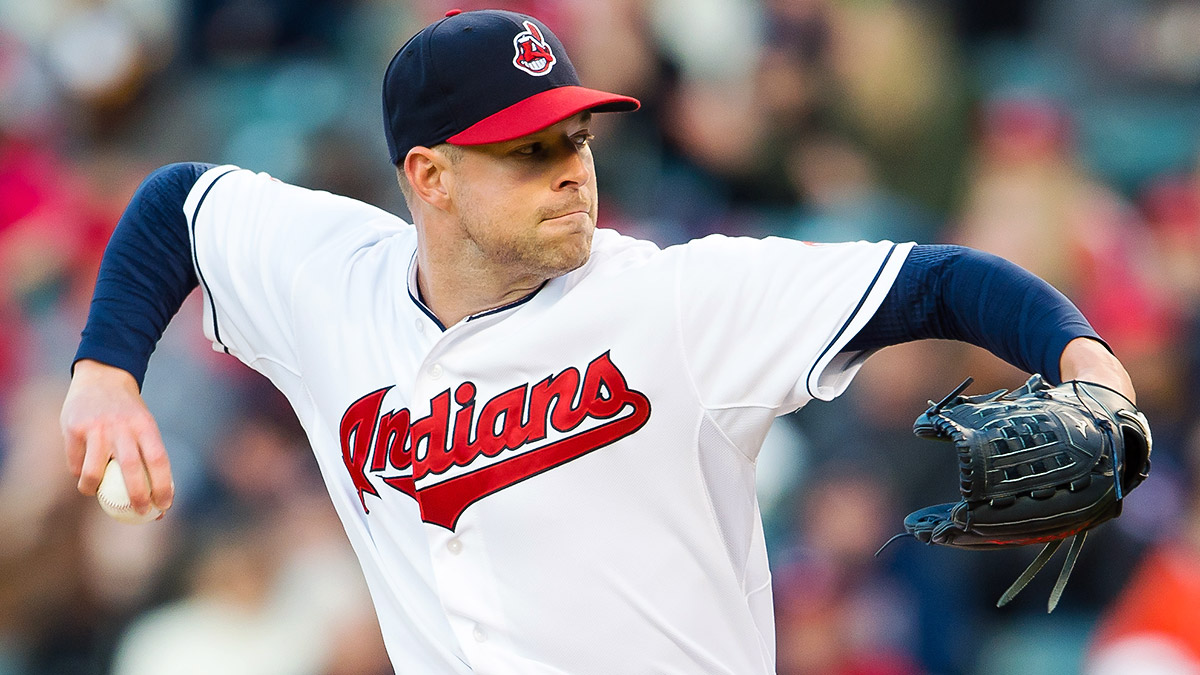 Baseball fans! Cleveland ace Corey Kluber delivered a start for the ages Wednesday night, striking out 18 Cardinals over eight innings while allowing just one hit and walking none.

If Kluber is done, it's the highest Game Score (98) in an eight-inning outing since at least 1914 and probably ever.

How good was he? “He was as good, if not better, than anybody I’ve ever faced in the big leagues,” St. Louis third baseman Matt Carpenter said. We agree. Allow us to share some feelings.

Jonah Keri: I don’t get why third-base coach Brad Mills, who was filling in for ejected manager Terry Francona, pulled Kluber after eight innings. Kluber was in total control, with no slippage in velocity or results. The Indians were trying to win a tight 2-0 game, and Kluber would have been a better call in the ninth than shaky closer Cody Allen, who earned an irrelevant post hoc save. If they wanted Kluber to chase history, they obviously should have let him chase three more strikeouts.

Would Mills (or Francona) have left Kluber in if he were throwing a no-hitter? I think so. But given how often no-hitters happen (a few times a year) compared with how often 21-strikeout games happen (never), this irritating managerial decision pisses me off. Tito’s lucky I don’t hold grudges against ex-Expos, and Mills is lucky by extension.

Mallory Rubin: Can we all agree that LeBron’s newfound spark is at least partially responsible for Kluber rediscovering his form? Lest we forget, Cleveland’s finest shared a touching moment on the interwebs last November after Kluber won the AL Cy Young award:

@KingJames Thanks so much. Gotta admit this might be the coolest part so far! I'm pullin for the Cavs

A Twitter bond is a life bond. And a king can beget a prince. Kluber had allowed 19 runs in his prior four starts. Wednesday night, he looked like he’d never allow a run again. Is it really a coincidence that he remembered how to dominate after (presumably) watching LeBron do this and this? I think not. Also, I want to make Chris Ryan proud, so I’m talking about basketball.

Mark Lisanti: I don’t know, this whole thing feels a little show-offy after Michael Pineda’s 16-K Sunday start. (He did it in seven innings. I’m not sure which game is more impressive.) (Yes, I am. Pineda’s. He did it first.)

Kluber’s ostentatious performance also threatens to overshadow John Lackey’s heroic effort to not consume a single raccoon while pacing nervously in the other dugout. Props to Lackey, he really wanted to eat a raccoon, but didn’t. And he’s resisting that raccoon-eating impulse for the league minimum. Let’s not forget that, either.

Ryan O’Hanlon: Here’s a theory: A few minutes before his first pitch, Kluber took a look at the Cardinals’ batting order. He saw Matt Carpenter, who, for all we know, may actually have greyscale. He saw Jason Heyward, whose 2015 season doubles as a near-flawless argument for the introduction of aluminum bats into professional baseball. All in all, he saw a lineup filled with plenty of automatic strikeouts, plus Matt Holliday.

Am I saying that Kluber purposely plunked Holliday in the first inning to clear his path toward near-Wood-ian greatness? Am I saying the idea that a man who recorded 18 strikeouts and is often likened to a cyborg by Major League Baseball itself would temporarily lose control of a single pitch and accidentally injure another player is both an insult to Kluber and to recent advances in artificial intelligence? All I’m saying is this: I’ve seen Ex Machina, man, and someone needs to be asking these kinds of questions.

Ben Lindbergh: We’ve reached the point in the pitch-count crackdown where anything above 120 makes every fan in the stands a mandatory reporter. Johnny Cueto’s 125 on April 22 is the ironman mark this year; by this date last season, six starters had equaled or surpassed that total. Even if Kluber had been as efficient in the ninth as he was through the first eight innings, he would have hit 127, and OSHA would have carted Mills and Francona away. The byproduct of all of this increased caution is that we don’t get to see pitchers attempt to make milestone starts. On the other hand, we’ve completely eliminated arm injuries. So, drawbacks and benefits, right?

Kluber entered Wednesday’s start with a bigger ERA-FIP differential than any other pitcher with at least 40 innings pitched, at 1.83 runs. Normally, that’s a sign things are about to be better. The depressing part: The gap for the Indians’ entire rotation was even higher than Kluber’s alone, at 1.96. That’s more than just a run of lousy luck. The Indians are last in Defensive Efficiency, converting only 65.5 percent of balls in play into outs. For reference, the worst Defensive Efficiency over a full season since 1950 is 66.9 percent (the 2007 Devil Rays). Being below that is bad.

Fortunately, Kluber has discovered the perfect prescription for disastrous results on balls in play: not allowing any. Not only did Kluber become the first pitcher to strike out 18 in more than a decade, but he also did it against one of the toughest teams to K. Whatever the Indians defense makes his ERA look like, this is still the same guy who just won a well-deserved Cy Young. Your move, Salazar.

Matt Borcas: I like to think that Tito, who was ejected in the bottom of fourth, was just as mystified as anyone when Allen came in for the save. He probably kicked over a clubhouse coffee table and fired off multiple angry-face-emoji-laden iMessages to Mills. Next time he’ll remember to bring his Bobby Valentine mustache, that’s for sure.

Rany Jazayerli: I was at the very front lines of the pitch-count revolution back when Ben was in kindergarten (exaggeration, but only slightly!), and I still can’t believe the pendulum has swung this far the other way. When 1998 Rany was writing stuff like this, he never in a million years would have believed the day would come when a pitcher who had an 8/1/0/0/0/18 line would get pulled from the game for no other reason than that he had thrown 113 pitches. I introduced Pitcher Abuse Points in that article just six weeks after Kerry Wood, a 20-year-old rookie in his fifth major league appearance, had put up his famous 9/1/0/0/0/20 line, making the case for the most dominant start in major league history. (Wood’s 105 Game Score is the highest ever in a nine-inning game.)

Wood had thrown 110 pitches through eight innings in that game, and I can guarantee no one gave that a second thought at the time. I can guarantee that because practically no one even knew how many pitches he had thrown. Wood finished the game with 122 pitches, and if that sounds like a lot to you, consider that it wasn’t even Wood’s highest pitch count that month. He would throw at least 122 pitches in a game seven times that year.

Kluber, who is 29 and won the freaking Cy Young Award last year, has never thrown 122 pitches in a game. And not even a chance at 20 strikeouts — or even 21, which would best the nine-inning record set by Roger Clemens and equaled by Wood and Randy Johnson — was enough to make the Indians budge. If a veteran pitcher who had pitched from the stretch for exactly two batters all night, who had whiffed five of the last seven batters he faced, who had a chance at immortality … if THAT guy gets pulled after just 113 pitches, I think it’s time to say that maybe the pitch-count revolution has gone too far.

And it’s time to give up the hope we’ll ever see a 20-strikeout game again, because it’s essentially impossible to do so in fewer than 120 pitches. Which is a shame, because it would have been really, really cool to see.

Michael Baumann: I’m somewhat less interested in the pitch-count debate than I am in this video:

Don’t look at the curveball; look at the Cardinals hitters and their reactions. Kluber took one of the best teams in baseball and reduced it to a quivering, hapless mess of goo. Here are 16 different expressions of unhappiness from major league hitters, plus two more from Pete Kozma, ranging from Kolten Wong’s disbelief to Carpenter’s self-flagellating spin to Jhonny Peralta’s “fuck this noise” glance at the ground, as if the chalk and soil of the baseball field itself had betrayed him. The unhappiness comes in stages, the — and I pretty much have to make this joke now — Kluber-Ross model.

Even better: All of this happened against the backdrop of national baseball Twitter not being aware, as we Ohio residents are, that there’s almost no crowd noise on the Indians’ TV broadcast. So as a nation gazed upon Kluber’s majesties, it was met with a creepily quiet parade of unhappy men. To me, it’s not the numbers, or the marvel of aerospace engineering that is Kluber’s curveball, that shows what baseball’s all about; it’s the quiet, understated marathon of sadness, the necessary foil to the triumphal victory in a zero-sum enterprise. There’s none of the ostentatious rah-rah of football’s 1960s-era American masculinity or the gleeful artistic panache of well-executed basketball. Baseball is as covered in mundane failure as the Earth is covered in water, and both are essential sustaining elements of life.