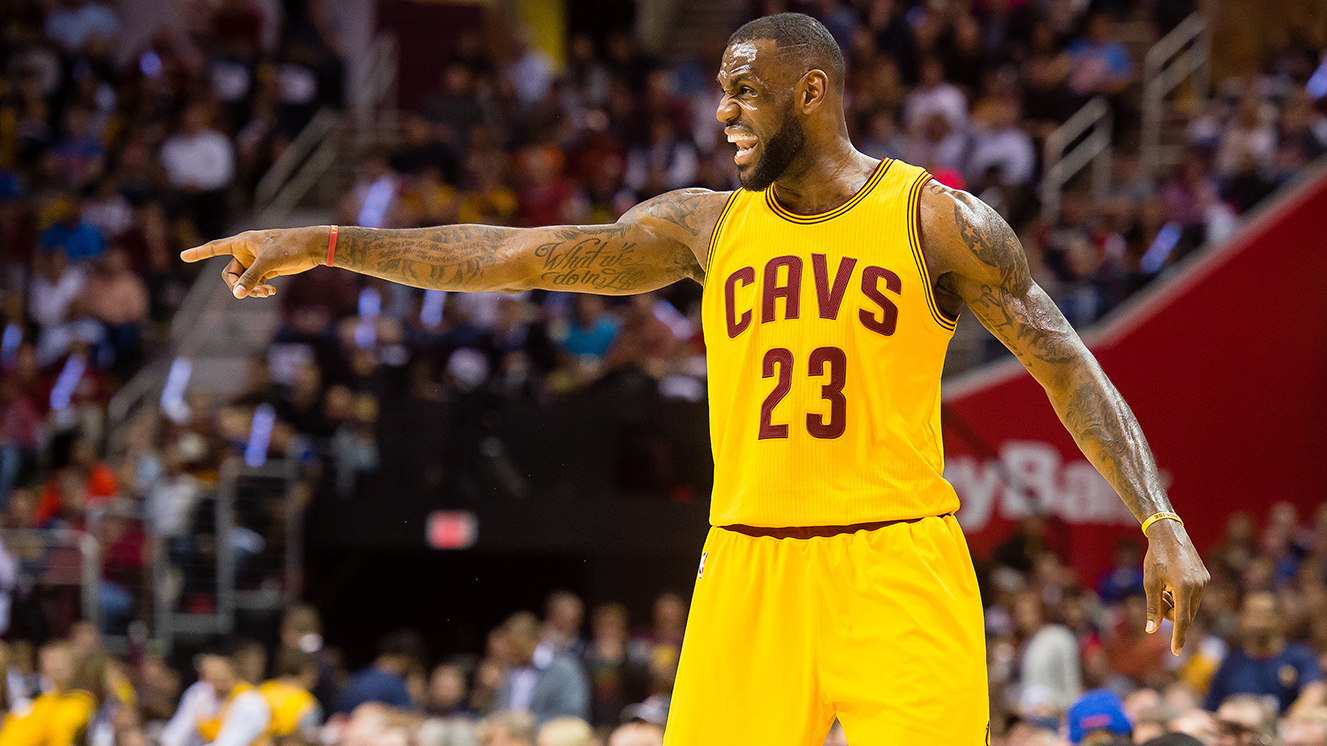 Chris Ryan: When LeBron is truly hearing Jimi, he provides that rarest of sports sensations: certainty. I was pretty sure, from the second he got his hips turned, that LeBron had this would-be-game-tying Derrick Rose run under control. Right about here: 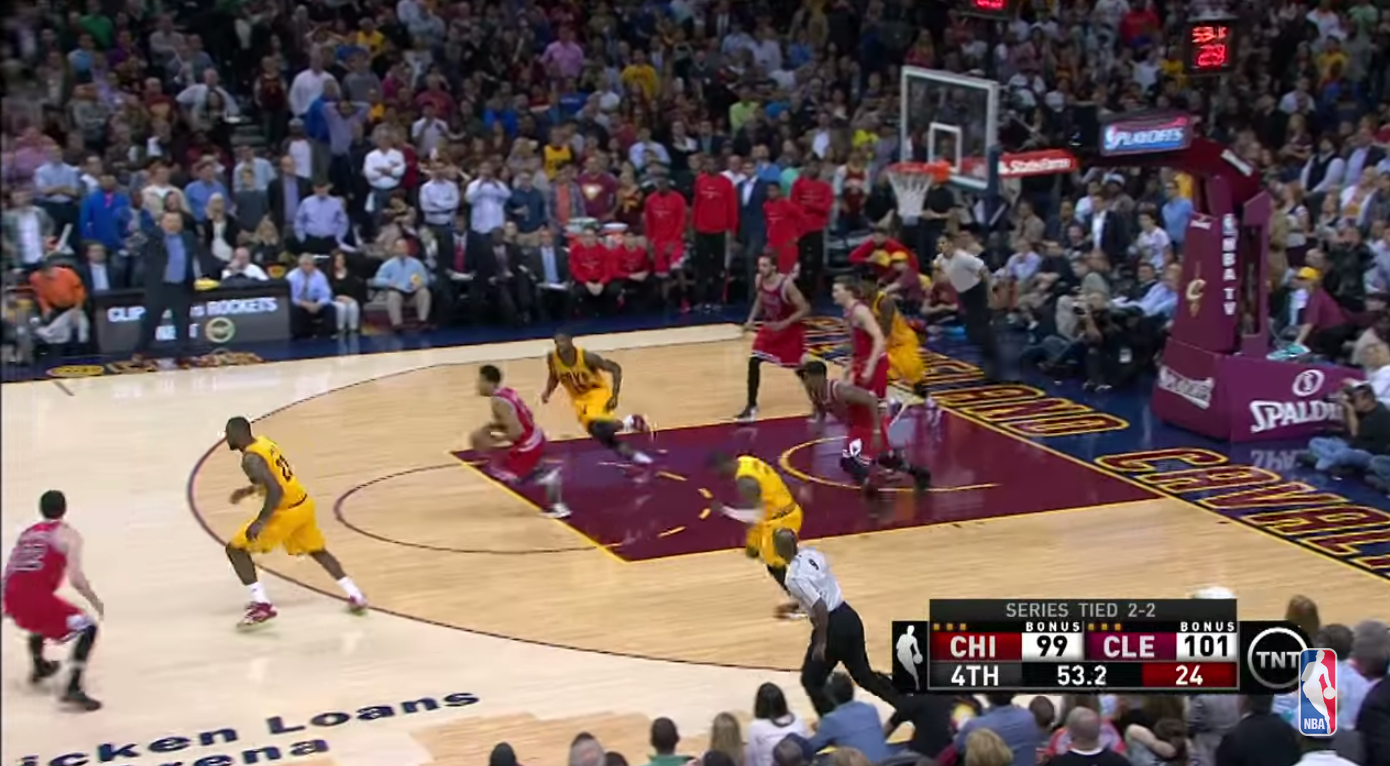 This is a picture of a man who can see the future. LeBron James controls the chessboard. From this exact point, one of the greatest athletes I will ever see timed a 50-something-foot run so accurately, played his angle so precisely, and hit his jump so perfectly, that I experienced a sports moment in which I was totally sure of the outcome. This shot was blocked before Rose even got the ball. It was blocked on Monday. 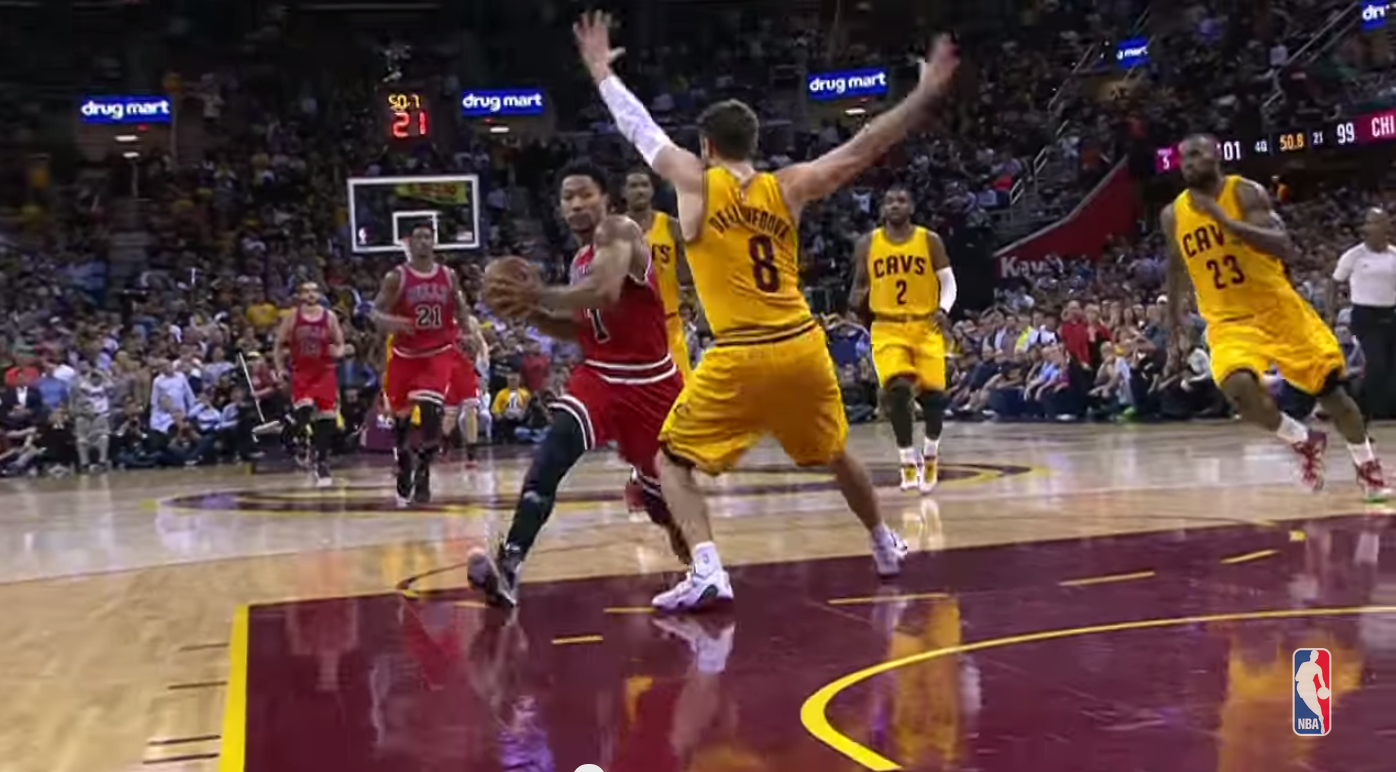 This is a picture of a shark attack, only Rose doesn’t know he’s swimming. The Bulls made a nice little run, playing without the ejected Taj Gibson and the injured Pau Gasol. But honestly, once LeBron got going, the result here was never in doubt. When LeBron is locked in like he was last night, there is no such thing as doubt.

Kyrie Irving had an MRI this morning that confirmed a right foot strain and tendinitis in his left knee. Amazing he can run at all.

Andrew Sharp: In a game with a double-digit fourth-quarter comeback, a near-brawl between the teams, and 38 points from the best player on earth, it may have been easy to miss Kyrie Irving. I noticed him in the second quarter, when I looked up and said, “Holy shit, Kyrie is literally hobbling down the court out there. He can’t even run.” Then he hit a 3.

That’s what kind of night it was. There was one sequence in particular that changed everything. The Bulls turned a 10-point game into a one-point game with four minutes left in the third quarter, and it felt like they were getting things back under control. Then Kyrie hit a 3 and a long 2 to put the Cavs up six, and that was enough to spark a run that put Cleveland ahead by double digits once more.

The Cavs got Godzilla LeBron last night — he had 24 points in the first half and finished with 38/12/6/3 — but Cleveland needed Kyrie, too. And I just want to mention, in case anyone missed it, that we should all be amazed by what happened — that he played at all, and that he played like that. He had 25 points and five assists in 39 minutes.

Kyrie is an easy target sometimes, and he’s got plenty left to prove. For now, he’s probably more likely to get blamed for the Cavs’ failures than get credit for their success. (This postgame camera work is basically a metaphor for his life if the Cavs lose.) But if he still has to prove himself, last night was a good start.

Get yo limping ass over here pic.twitter.com/CYcIqZBsSc

Sharp: The Eastern Conference has been the object of considerable ridicule over the past month/year/decade. It’s all deserved. But as someone who grew up east of the Mississippi, Eastern Conference basketball will always have its charms for me. Let the Warriors score 130 a game while Chris Paul throws assists off the backboard.

You know what the East does? IT FIGHTS.

This Bulls-Cavs series has been ugly, overly physical, and nasty on both sides. It’s perfect. Joakim Noah might break a chair over someone’s back before we’re done. And each of the past three games has been dead even, which only heightens the tension for the remainder.

I don’t have anything meaningful to say about the fighting, or about last night’s fight, except that I loved every second of it. This is a rite of spring for all of us. April showers bring May flagrants to whatever team LeBron plays for. And for as much as NBA writers might bemoan conferences as some kind of antiquated tradition, I will always love that half of the NBA turns basketball into airborne rugby every postseason. After all, it’s not just Bulls-Cavs. The Pacers and Heat were no different the past two postseasons. Remember when Dexter Pittman almost decapitated Lance Stephenson? And Lance deserved it!

Matthew Dellavedova also deserved it last night. On the other hand, maybe Taj Gibson deserved the leg lock after he drove his forearm into Delly’s back, crashing him to the ground. That’s probably why he got kicked out, although the Cavs fans ceded the moral high ground pretty quickly.

These teams hate each other. These fans hate each other. All of it’s great. Some kids grew up loving pro wrestling, but I could never get into it. Last night I finally realized why. Who gives a shit about wrestling when you can just watch the Eastern Conference playoffs?

Two Sides to Every Story

Dunleavy: "When you get locked up like (Taj did w/ Dellavedova), as far as I'm concerned, all bets are off."

The candid, and entertaining Kendrick Perkins on the Taj Gibson kick: "Man, he has to get suspended. He kicked my boy Delly in the ass." 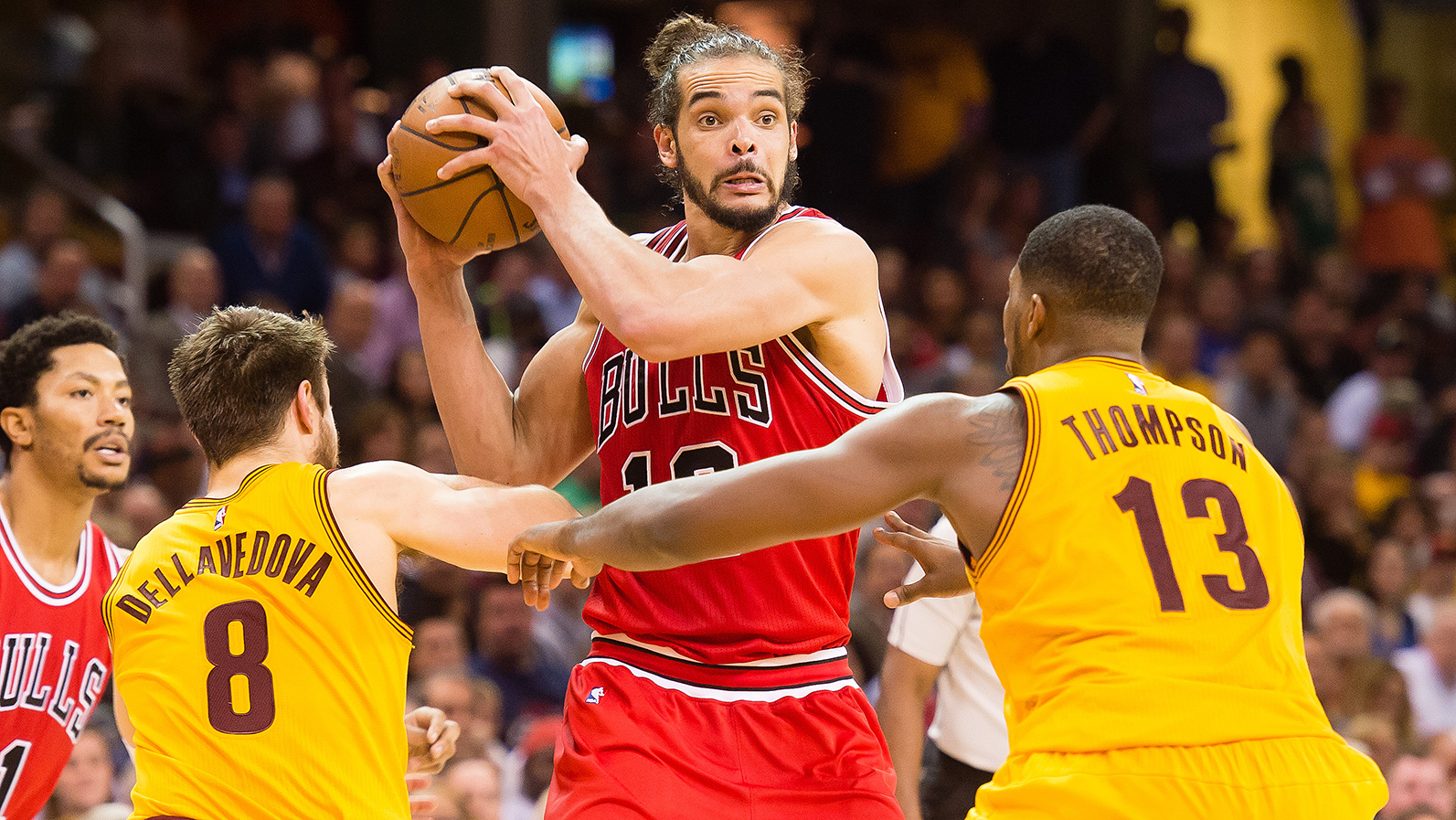 Robert Mays: It’s hard to pick which image of Joakim Noah from these playoffs has been most crushing. Watching him spin in circles near the top of the key, desperately searching for anyone open. Seeing that left-handed runner clank off the side of the rim time and again. The sight of him unable to get off the ground to snatch the final rebound last night may have been the worst, or maybe it’s just the most recent.

We never saw the best version of Tom Thibodeau’s Bulls in the playoffs — we aren’t seeing them now, and if you believe what you read, we probably never will — but the heart of the teams we did get to see was Noah. I mean that in an emotional sense — no Bull brings United Center to life like Noah does when he shakes his hands the crowd’s way — but it’s just as true in a purely basketball sense.

Noah has anchored some of the best defensive teams in recent memory, and the defensive player of the year award he brought home last season was more than deserved. But what he did last season, shouldering so much of the Bulls’ offensive load while maintaining his status as one of the league’s top defenders, was, at times, superhuman. Chicago’s offensive rating was nearly seven points better with Noah on the floor, and his assist percentage — an absurd 26.4 — was the second-highest ever among centers who topped 2,000 minutes. He was the engine room of almost everything that 48-win playoff team accomplished.

That load was lessened this year with Derrick Rose’s return (for part of the season, at least), Jimmy Butler’s emergence, and Pau Gasol’s arrival. But in the playoffs, the situation has devolved — Noah is no longer propping up the Bulls; he’s actively pulling them down. His collection of lower-body injuries has made him a complete nonfactor when he catches the ball up high. He isn’t creating off the dribble, and the backdoor looks that became his staple have been taken away because they’re all that teams fear. Defensively, the rim protection has waned, his prowess as a pick-and-roll master has fallen off, and Cleveland’s hold on the offensive glass only seems to be growing.

The hope here is that time heals all wounds, that Noah will be back next year and closer to his old self. But watching him recently, it becomes tougher to hang on to that hope. The Bulls will let me bury them when I pry the shovel from their cold, broken-down hands. But as they sit facing elimination, it’s tough to not let thoughts of the future creep in. Next year is the final season of Noah’s deal, and he’s on the wrong side of 30. If the coach … y’know what? Never mind. I’m not doing this. It’s too damn sad.

I’ve arrived early to plenty of Bulls games in recent years. I’ve been a reporter at a few practices, too. Watching Noah work out is my favorite part, every time. Anyone who thinks Joakim Noah is anything less than the soul of these Bulls, I don’t know what to tell you. Part of me can’t wait to watch him with his back against the wall on Thursday, spilling out everything he has. The other part knows it’ll be hard to admit how little that might be. 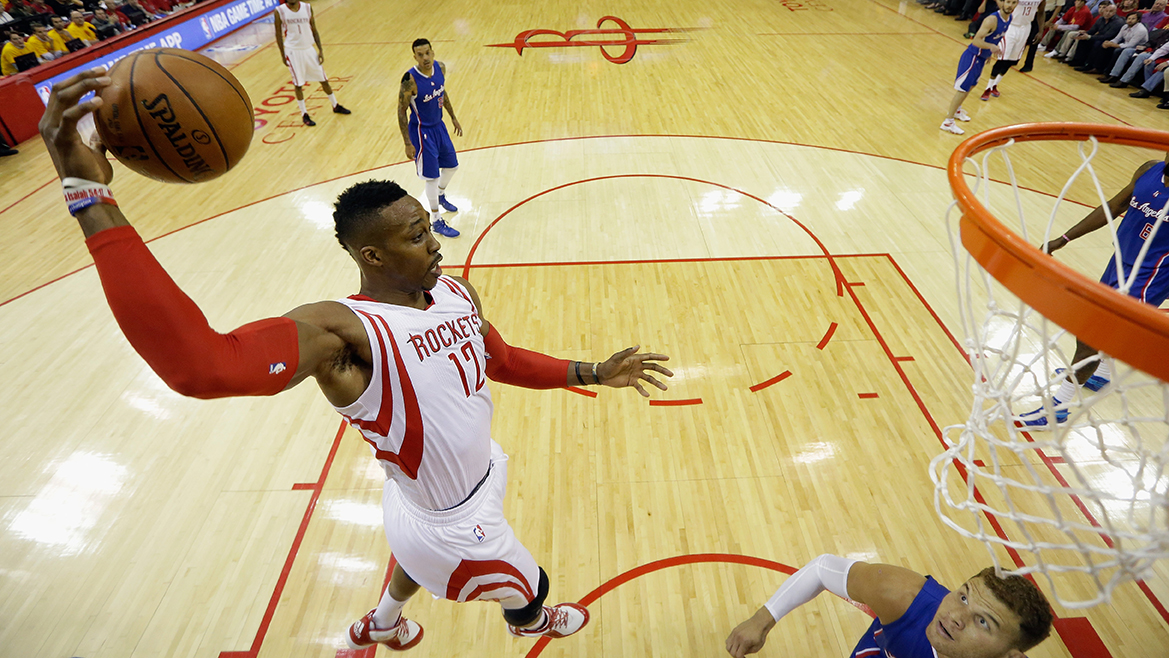 Jason Concepcion: Early in Game 5, TNT color analyst Reggie Miller ticked off his three keys to the game for the Houston Rockets. They were:

Miller has come by his reputation as an elite assembler of sports-inflected Perd Hapley fridge poetry honestly. His analysis, which rarely goes deeper than his subject’s epidermis, was roundly mocked. Which is a fun thing to do. I recommend mocking Reggie Miller. Except in this case. Yes, those keys are alphabet basic, but he could hardly have been more right.

Let’s be real: If someone (Matt Barnes, allegedly) tells your mother to S his D, and your response to the insult is to get clowned by 33 points on Mother’s Day, then, to paraphrase Morpheus, your problem is not your technique. It is not how you execute. You should maybe try playing hard.

On Sunday, the Rockets wilted under the Clippers’ second-half onslaught of DeAndre Jordan revenge dunks. They got outscored 50-36 in points in the paint. Harden took the same number of field goal attempts (12) as Jason Terry and Terrence Jones, and then listlessly retreated to the bench to stare blankly into the void, as if spiritually surrendering to the inevitable Photoshop memes. Dwight Howard played 18 minutes, didn’t score after halftime, and was called a bitch by Matt Barnes. Kevin McHale reached down the depth chart for Nick Johnson and Kostas Papanikolaou to set the world record in Hack-a-Jordan unwatchability, and somehow nobody could find the right moment to set a hard screen on Barnes.

But shame is a powerful motivator.

In Game 5, it was the Rockets who dictated terms. They scored 64 points in the paint to the Clippers’ 46. They outrebounded Los Angeles 58-39. They took care of the ball. Layups, rebounds, and turnovers — Basketball 101. Howard, who picked up a foul in the game’s first 20 seconds, steadied himself, constantly getting free for dunks. Harden snaked into the lane, scored 26 points on 20 shots, and doled out 10 assists. Trevor Ariza (22 points), Corey Brewer (15), and Jones (12) all made important contributions. And, this time it was the Clippers who played with a dulled edge, as if expecting the bruising they laid on the Rockets on Sunday to do the work for them. This time it was the Rockets who played harder, tougher, and smarter.

And, like a broken clock, this time Reggie Miller was right.