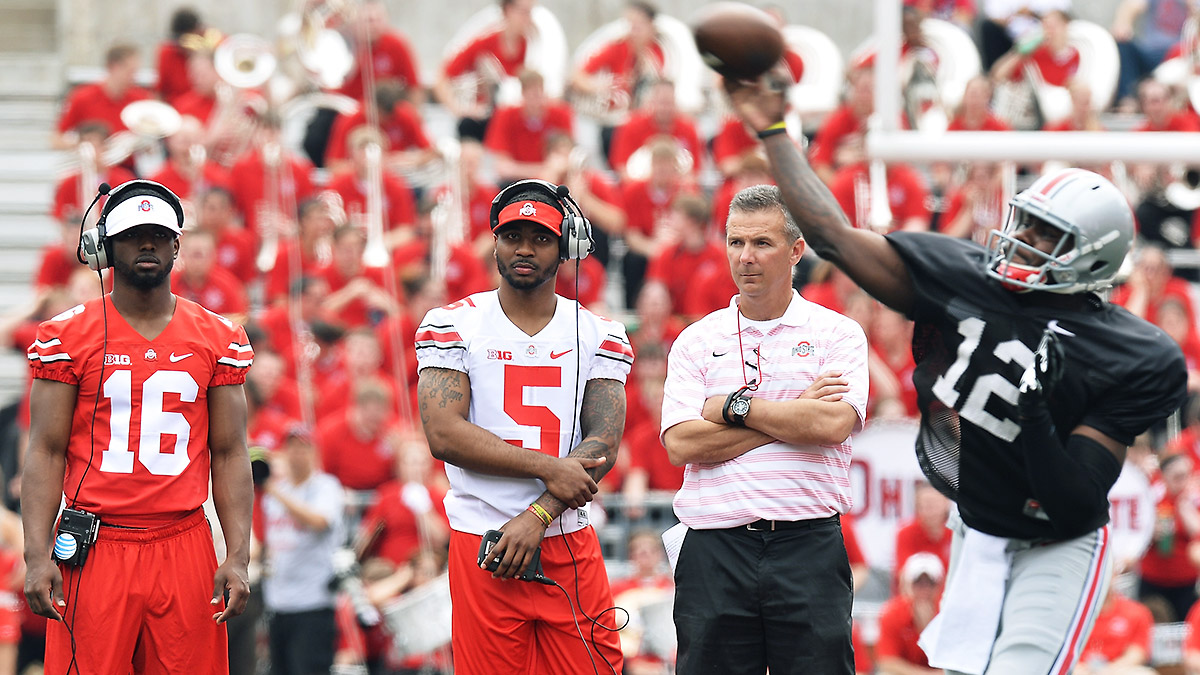 By most measures, Braxton Miller is the most accomplished quarterback in Ohio State history. The numbers speak for themselves: After arriving as a five-star recruit, he claimed the starting job as a true freshman, and subsequently won 22 consecutive starts as a sophomore and junior. He has more career victories to his credit than the only modern Buckeyes QB to win the Heisman Trophy, Troy Smith,1 and more total yards as a passer and rusher than any other Buckeyes QB except Art Schlichter. He was voted Big Ten Offensive Player of the Year in both 2012 and 2013, also finishing in the top 10 in Heisman voting both seasons. By all accounts, he’s a mature presence in the locker room, a team leader and the kind of guy everyone can be proud to see as the face of the program.

So while it wasn’t exactly a surprise on Thursday when Miller confirmed his plans to switch to wide receiver for his fifth and final season in Columbus, it was plenty surreal. This time last year, the recurring shoulder injury that knocked Miller out for the entire 2014 season looked like a harbinger of certain doom for Ohio State’s national title ambitions; even by the end of the season’s first month, after understudy J.T. Barrett had all but erased those fears, coach Urban Meyer assured reporters in no uncertain terms that “Braxton is our quarterback“ upon return from injury in 2015. How could he not be? Instead, by ceding the year’s most anticipated competition to Barrett and national championship hero Cardale Jones before it’s really even begun, Miller has effectively embraced one of the most unlikely and unprecedented trajectories the sport has ever seen: From Big Man on Campus to Wally Pipp in a little less than a year.

Given the circumstances, the move makes sense in many obvious ways. For starters, the defending champs really are that loaded. Miller is inarguably the most dangerous of the three quarterbacks with the ball in his hands, and probably the least polished as a passer. Even if that hadn’t been the case in the past, there’s a risk that multiple shoulder injuries have sapped some percentage of his arm strength, and he would have faced a likely position change upon graduating to the NFL, anyway. Moving Miller simplifies the preseason QB competition, ensures that one of the most dynamic athletes in the nation remains involved in the offense, and gives Miller a head start on adapting to his pro future. Miller will reportedly be spending most of his time at “H-back,” which in Meyer’s offense refers to a slot receiver used mainly on screen passes or to motion into the backfield as a second running back. (Think Percy Harvin at Florida, who remains the platonic ideal for the position.) Miller also told Sports Illustrated’s Pete Thamel that he’ll get a shot at returning punts, which is an exciting proposition.

Just as obviously, though, it’s hard not to read the move as a kind of consolation prize for a player who was once the indisputable, indispensable engine of the offense. For one thing, Miller’s new niche is no less crowded than the logjam he’s attempting to escape behind center: The receiving corps already features the 2014 team’s leading pass-catcher, Michael Thomas, as well as versatile jitterbugs Jalin Marshall and Dontre Wilson in the H-back role, where they combined for 1,044 yards and 10 touchdowns off the bench in 2014.2 Most of the offensive touches still figure to be monopolized by workhorse tailback Ezekiel Elliott, one of the breakout stars of the postseason title run, and his promising backup, rising sophomore Curtis Samuel. Those five players accounted for 526 of OSU’s 950 total touches in 2014, and considering that both Barrett (171 carries) and Jones (72 carries) often functioned as de facto tailbacks in their own right, there was barely anything left for anyone else. 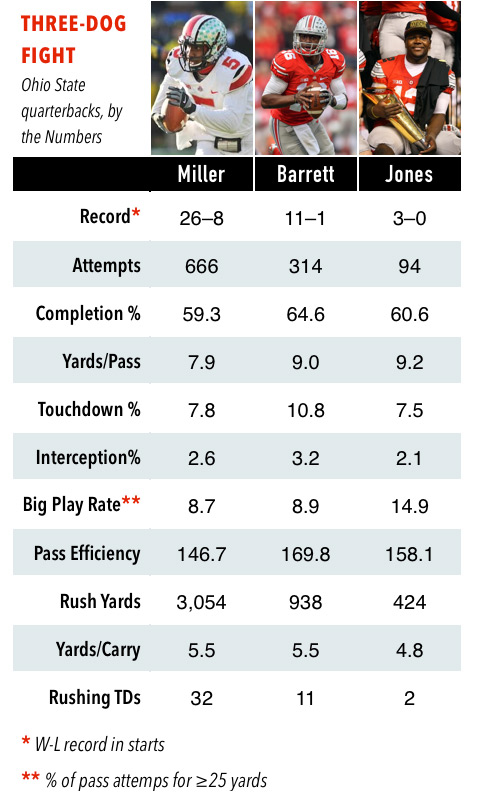 From Ohio State’s perspective, of course, such an overabundance of riches is the best possible problem to have. But from Miller’s perspective, unless he establishes himself immediately as the next Hines Ward or Julian Edelman, it has the makings of an anticlimax. The only notable weapon missing from last year’s prolific attack is the resident deep threat, Devin Smith, who led the nation in yards per catch and was snapped up in the second round of the draft by the New York Jets. If anyone is capable of filling Smith’s role in the offense, though — a big if, given that Smith essentially specialized in hauling in long bombs in traffic — it’s more likely to be Thomas or redshirt freshman Johnnie Dixon. Miller is a top-shelf athlete, but given that he’s never played wide receiver, there’s bound to be a learning curve as a route-runner, and at 6-foot-2, 215 pounds, he isn’t built like the lanky, small-forward types who tend to excel at boxing out defenders on jump balls.

Miller’s raw elusiveness makes more sense when employed underneath, but touches there could be just as hard to come by: In a run-heavy scheme, at a position with so many other shifty playmakers vying for attention, merely carving out a regular role in the rotation for Miller might be the best-case scenario. If so, at some point he’ll have to wonder whether saying “Thanks but no thanks” to potential suitors for his services this spring was worth it just to become another face in the crowd.

At any rate, now comes the really hard part: Choosing between Barrett, the reigning Big Ten Quarterback of the Year and Freshman of the Year, and Jones, who became the Brobdingnagian revelation of the Buckeyes’ postseason title run after Barrett was sidelined with a fractured ankle. The further we get from Jones’s triumph in the championship game, the more the pendulum seems to be swinging toward Barrett as the favorite to start the opener against Virginia Tech based on his competence and consistency over the course of (almost) a full campaign — there’s a reason, after all, that the coaches opted for the younger Barrett over Jones after Miller was ruled out last summer, and that Barrett went on to finish fifth in Heisman voting even after Jones’s coming-out party. If Barrett, who sat out spring drills but has since been fully cleared for preseason camp, is back to 100 percent, the job could be his to lose. Or, the result could look something like the platoon that Meyer orchestrated at Florida in 2006, when rhino-esque freshman Tim Tebow routinely replaced starter Chris Leak in short-yardage situations and in the red zone. That combination was instrumental in leading the Gators to the national championship, and a Barrett/Jones revue in 2015 would represent an upgraded pairing.

The upshot to all of this is that Ohio State boasts such enviable depth that it can afford to mix and match its lineup in almost any conceivable configuration and still come out well ahead of the pack. Miller’s transition may come off without a hitch, turning him into one of the most productive targets on the team and perhaps in the entire conference; he may also find that much of his productivity has been lost in the transition, or even find himself back in the mix at quarterback if the new position doesn’t take. Either way, it’s impossible to imagine any other outfit, maybe ever, enjoying the luxury to conduct the same experiment.